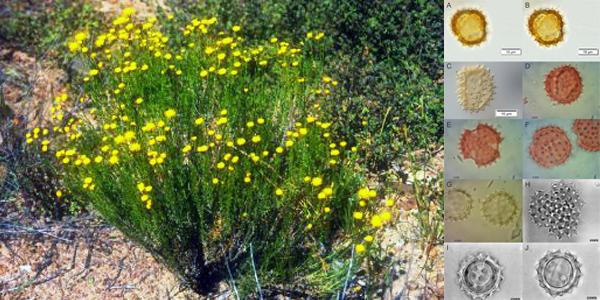 This is Chrysocoma ciliata and microscope images of its pollen grain. Source: Jennifer Fitchett and Louis Scott

The DST-NRF Centre of Excellence for Palaeoscience funded researchers based in the School of Geography, Archaeology and Environmental Studies and in the Evolutionary Studies Institute of the University of the Witwatersrand have used fossil pollen records to solve an on-going debate regarding invasive plant species in eastern Lesotho.

Their study, Chrysocoma ciliata L. (Asteraceae)in the Lesotho Highlands: an anthropogenically introduced invasive or a niche coloniser?, published in Biological Invasions, confirms that a shrub believed to be an invasive in the eastern Lesotho Highlands has been growing in the region for over 4,000 years.

Dr Jennifer Fitchett of the School of Geography, Archaeology and Environmental Studies, and her co-authors Professors Marion Bamford (ESI, Wits), Stefan Grab (GAES, Wits) and Anson Mackay (University College London Environmental Change Research Centre and Geography Department) have been investigating the palaeoenvironments of eastern Lesotho through the use of pollen, diatom and sedimentary records.

In a case of ‘accidental science’, the group discovered the pollen of Chrysocoma cilliata at intermittent locations throughout the depth of the sediment profile they were studying. This was unexpected, as Chrysocoma ciliata is believed to be an invasive species introduced to the eastern Lesotho Highlands by cattle herders at the turn of the 20th century. The species was found to extend much further back in the pollen record than the 100 years that it is believed to have been growing in the region.

Chrysocoma cilliata came to the attention of environmental managers as it proliferates under drought conditions, and rapidly colonises degraded landscapes. In particular, the plant grows easily in abandoned cattle stations, where over-grazing has resulted in the loss of both top soil and vegetation. As the shrub was believed to be an invasive species, introduced to the region from the South African Karoo to the west, the primary management response was to attempt to eliminate the crop.

In recent years, Dr Clinton Carbutt of Ezemvelo KwaZulu-Natal Wildlife suggested on the basis of vegetation surveys that the species may in fact not be an invasive, but rather a species that thrives under conditions that the more typical alpine wetland groups struggle to survive. The pollen evidence for Chrysocoma cilliata dating back to 4,000 years before present supports this hypothesis.

Although this study proves that the species was not introduced to the region 100 years ago with the introduction of cattle grazing, as has previously been suggested, it is not possible at this stage to prove that it was not accidentally introduced by early inhabitants of the eastern Lesotho highlands. Archaeological records provide evidence for settlement in the eastern Lesotho highlands by Stone Age groups as far back as 80,000 years ago.

There is strong archaeological evidence to suggest that these groups migrated both seasonally and inter-annually to warmer regions, with water providing the primary attraction of the otherwise uninhabitable cold highlands. It is thus possible that they may have accidentally transported seeds of this plant into the region. If this were the case, the plant would be more accurately classified as an archetype invasive. However, until the presence or absence of this species prior to 80,000 years ago can be confirmed, Chrysocoma ciliata can most accurately be termed a niche coloniser, most probably native to the eastern Lesotho highlands.

This study highlights the importance of palaeoscience research in addressing global change challenges. In addition to determining the provenance of plant species, and hence resolving debates regarding their status as invasives, the analysis of plant and animal fossils can provide valuable information relating to climate change, and critical biological thresholds under changing conditions.