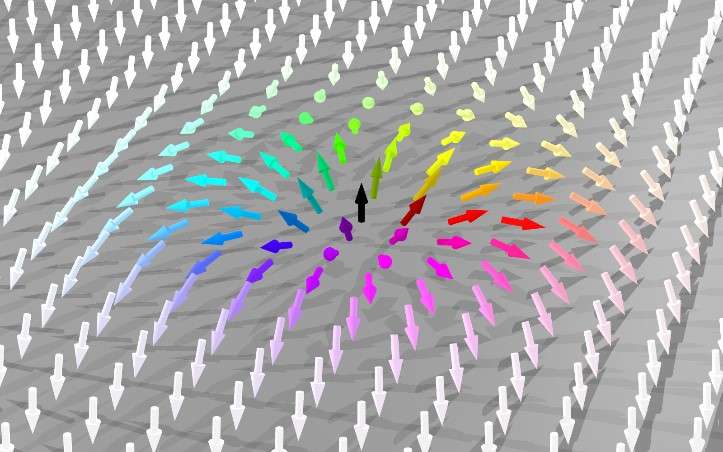 The magnetic structure of a skyrmion is symmetrical around its core; arrows indicate the direction of spin. (Credit: ill./©: Benjamin Krüger, JGU)

Researchers at Johannes Gutenberg University Mainz (JGU) and the Massachusetts Institute of Technology (MIT) have made a breakthrough in the field of future magnetic storage devices. In March 2016, the international team investigated structures that could serve as magnetic-shift register or racetrack memory devices. This type of storage promises low access times, high information density, and low energy consumption. Now, the research team has achieved the billion-fold reproducible motion of special magnetic textures, so-called skyrmions, between different positions, a key process needed in magnetic shift registers, thereby taking a critical step toward the application of skyrmions in devices. The work was published in the research journal Nature Physics.

The experiments were carried out in specially designed thin film structures, i.e., vertically asymmetric multilayer devices exhibiting broken inversion symmetry, which stabilized special spin structures called skyrmions. Those structures are similar to a hair whorl, and are relatively difficult to destroy. This grants them a unique stability, which is another argument for the application of skyrmions in such spintronic devices.

Skyrmions can be shifted by electrical currents and feel a repulsive force from the edges of the magnetic track as well as from single defects in the wire. Thus, they can move relatively undisturbed through the track. This is a key property for racetrack devices, which are proposed to consist of static read and write heads, while the magnetic bits are shifted in the track. However, skyrmions do not only move parallel to the applied current, but also perpendicular to it. This leads to an angle between the skyrmion direction of motion and the current flow called the skyrmion Hall angle. This has been predicted theoretically. As a result, the skyrmions should move under this constant angle until they are repelled by the edge of the material and then keep a constant distance from it.

Scientists of JGU and MIT have now proved that the billion-fold reproducible displacement of skyrmions is, indeed, possible, and can be achieved with high velocities. Furthermore, the skyrmion Hall angle was investigated in detail. Surprisingly, it turned out to be dependent on the velocity of the skyrmions, which means that the components of the motion parallel and perpendicular to the current flow do not scale equally with the velocity of the skyrmions. This is not predicted in the conventional theoretical description of skyrmions. Part of the solution to this unexpected behavior could be the deformation of the skyrmion spin structure, calling for more theoretical effort to fully understand the properties of skyrmions.

“In highly competitive fields of research such as that on skyrmions, international cooperation with leading groups is a strategical advantage. Within only two years after the start of the collaboration with our colleagues from MIT, we have already published the second time together in a high-ranked Nature group journal. The MAINZ Graduate School of Excellence facilitates research stays of PhD students from the United States in Mainz and vice versa and therefore contributes significantly to international education and successful research in this field,” said Professor Mathias Kläui of the JGU Institute of Physics, who is also Director of MAINZ.