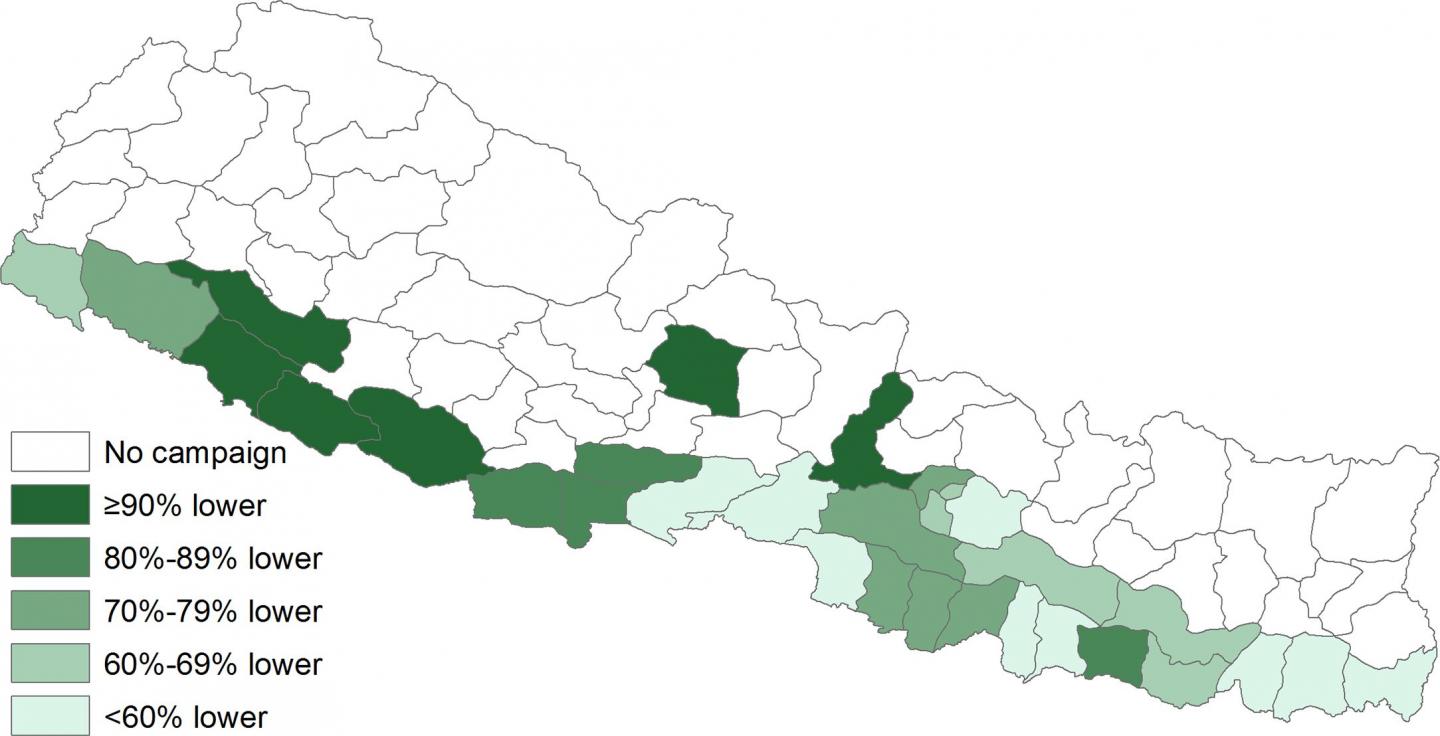 Percent difference in expected and observed incidence of Japanese encephalitis following vaccination campaign, by district, Nepal. Source: All figures and photographic images will be published under a Creative Commons Attribution License (CCAL), which allows them to be freely used, distributed, and built upon as long as proper attribution is given.

From 2006 through 2011, Nepal conducted a mass immunization campaign against Japanese encephalitis–a mosquito-borne viral disease. Now, investigators have reported in PLOS Neglected Tropical Diseasesthat the vaccination effort prevented thousands of cases of Japanese encephalitis (JE) and cut JE rates in Nepal by at least 78%.

In many Asian countries, JE is associated with significant mortality; nearly a third of cases are fatal in some places, and up to half of survivors are left with neuropsychiatric sequelae. There is no treatment for JE, but vaccines can prevent disease. In the Nepalese campaign, the SA 14-14-2 JE vaccine was first administered in 23 districts with the highest JE rates, and then expanded to additional districts as well as integrated into the normal childhood vaccine schedule. An impact assessment in 2010 found that the post-campaign JE rate was 72% lower than expected without any immunizations, but data in some districts was still early and limited.

In the new work, Shyam Upreti of the Ministry of Health in Nepal, along with colleagues from the U.S. Centers for Disease Control and Prevention and others, used a more complete dataset, collected through Nepal’s routine surveillance system from 2004 through 2014. At least three years of post-vaccination campaign data were available for 31 districts in the country.

The rate of JE after the immunization campaign–0.7 cases per 100,000 people–was 78% lower than would be expected without the vaccine, and an estimated 3,011 cases were prevented. The rate of acute encephalitis syndrome–a broader term which encompasses JE as well as other diseases–was 59% lower than expected and an estimated 9,497 AES cases were prevented, according to the new analysis.

“The overall impact on JE cases was likely about three times higher than suggested by the laboratory-confirmed cases alone, supporting the idea that a JE immunization program will result in reductions in the incidence of both clinical AES cases and laboratory-confirmed JE cases,” the investigators say. “These findings support continued implementation of the JE immunization program in Nepal.”