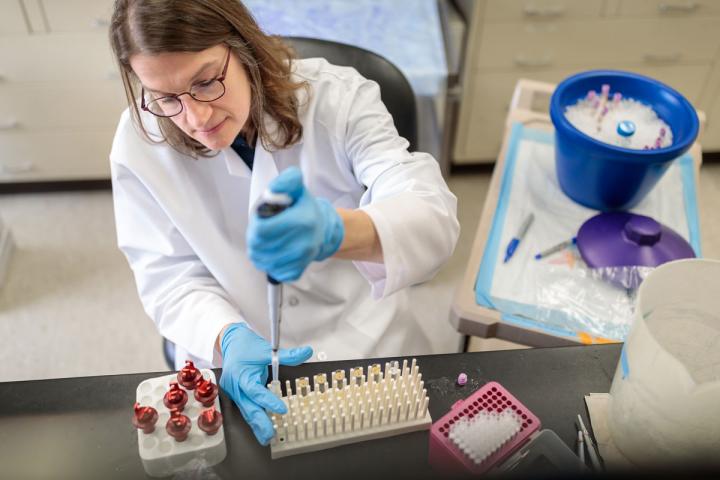 Gwendalyn Randolph, Ph.D., prepares samples for a human study on the link between autoimmune and cardiovascular diseases. She recently published an animal study showing that immune cells that arise during autoimmune disease cause cholesterol to become trapped inside blood vessels. Credit: Matt Miller

People with autoimmune diseases such as psoriasis, lupus and rheumatoid arthritis are at high risk of developing cardiovascular disease, even though none of these conditions seem to target the cardiovascular system directly. Now, researchers at Washington University School of Medicine in St. Louis believe they have begun to understand the link between the two.

Researchers studying mice with a psoriasis-like condition found that the mice’s blood vessels were stiff. Cholesterol normally circulates freely between the blood and the tissues, but in these mice the inflexible vessel walls trapped cholesterol in their walls, promoting plaques that can cause heart attacks and strokes.

“For decades it’s been known that the trapping of cholesterol drives disease, and now we have a mechanism for how certain immune responses typical of autoimmune diseases might make that worse,” said senior author Gwendalyn Randolph, PhD, the Emil R. Unanue Distinguished Professor of Immunology and a professor of medicine. “In the mouse, the signs of cardiovascular disease scarcely arose when we neutralized these immune components. In people, it’s hard to be sure, but we would predict it would be preventable, too.”

The findings are published Nov. 8 in Cell Metabolism.

People with psoriasis and lupus are two to eight times more likely to suffer a heart attack than people without these diseases. For young and middle-aged adults with rheumatoid arthritis, cardiovascular disease is the top cause of death.

Psoriasis is characterized by patches of red, thickened, scaly skin. The thickening is partly due to an excess of collagen, the main protein in connective tissues such as skin and blood vessels – and also the key ingredient in some beauty products designed to plump lips and erase wrinkles. In people with psoriasis, the excess collagen isn’t confined to the rash area; it can be found in seemingly normal, healthy skin, too.

Randolph and first author Li-Hao “Paul” Huang, PhD, an instructor in pathology, suspected that the walls of blood vessels also might be webbed with too much collagen. They created a light-sensitive form of high-density lipoprotein (HDL) – the molecular carrying case for cholesterol – that fluoresces when hit with a laser beam, and inserted it into mice. The researchers then induced a psoriasis-like disease in the mice by painting their ears with imiquimod, an inflammatory compound that activates the same kinds of immune cells that play a role in human psoriasis.

By following the fluorescent cholesterol carrier, the researchers could see that HDL cholesterol was delayed in getting out of the bloodstream in the mice that received the compound. This was true not only in the skin, but in internal arteries near the heart. In addition, the skin and blood vessels were more densely interlaced with collagen and more resistant to stretching.

Further, when the researchers fed mice a high-cholesterol diet for three weeks while also painting their ears, the mice in the experimental psoriasis group developed significantly larger cholesterol deposits in their blood vessels.

“The skin-driven immune response can drive systemic changes,” Randolph said. “Once immune cells are programmed by reactions to the inflamed skin, they move around the body to other skin sites and arteries to be ready for the next insult, enhancing the collagen density wherever they go.”

Drugs that target IL-17 already are approved to treat psoriasis, marketed under brand names such as Cosentyx and Taltz, and other anti-IL-17 therapies are in the pipeline.

“It’ll take a few years before we know for sure, but we predict that the anti-IL-17 antibodies that already are being used to treat autoimmune diseases will be effective at reducing risk of cardiovascular disease,” Randolph said. “This would be important because some other drugs on the market seem to improve the skin disease but not reduce cardiovascular risk.”