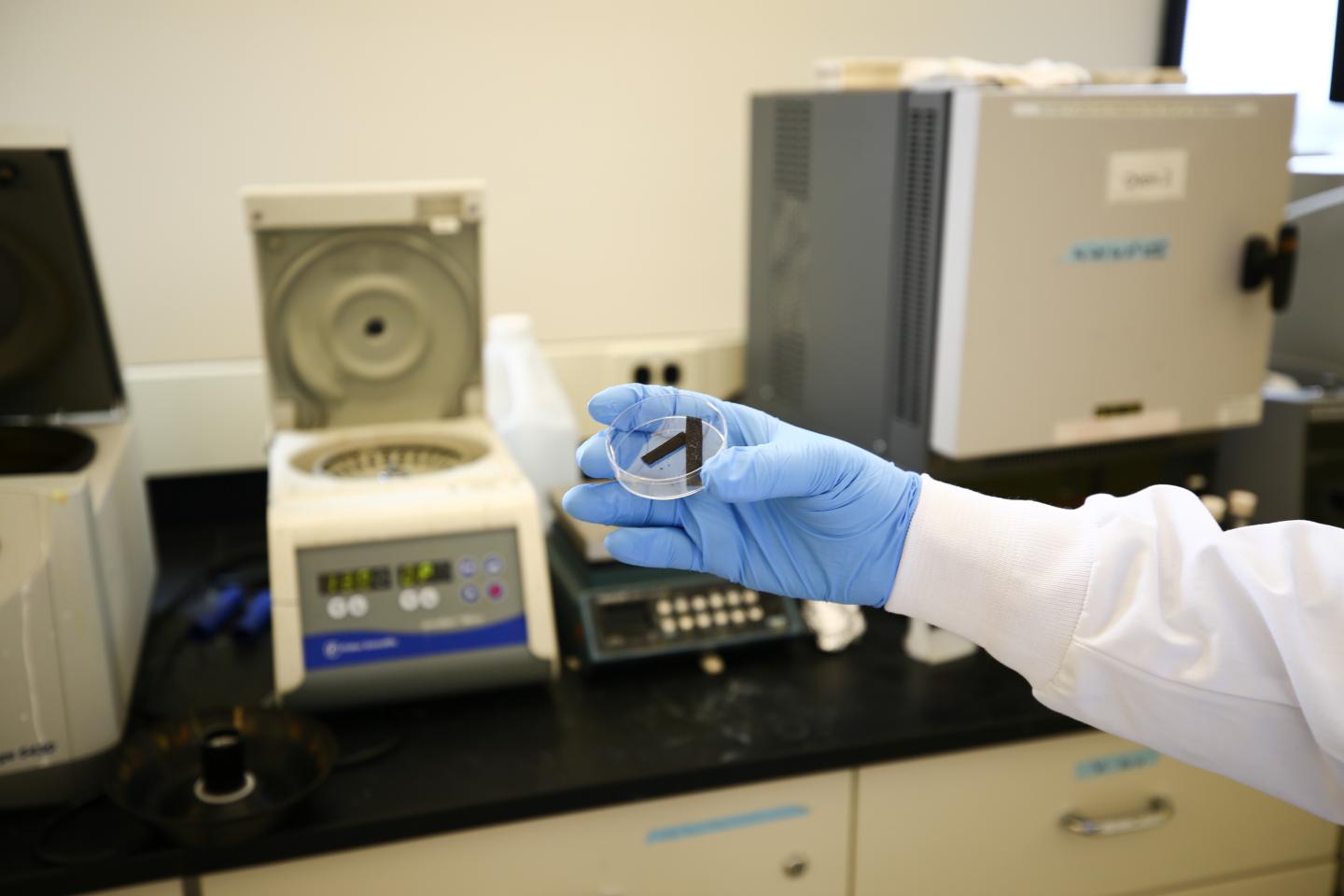 The researchers show a wafer coated in their new catalyst, which lowers the amount of electricity required to split water into hydrogen and oxygen under pH-neutral conditions.

A future powered by carbon-free fuel depends on our ability to harness and store energy from renewable but intermittent sources, such as solar and wind. Now, a new catalyst developed at University of Toronto Engineering gives a boost to a number of clean energy technologies that depend on producing hydrogen from water.

In addition to being a key ingredient in everything from fuel to fertilizers, hydrogen has great potential as an energy storage medium. The idea would be to use renewable electricity to produce hydrogen from water, then later reverse the process in an electrochemical fuel cell, resulting in clean power on demand.

“Hydrogen is a hugely important industrial feedstock, but unfortunately today it is derived overwhelmingly from fossil fuels, resulting in a large carbon footprint,” says Professor Ted Sargent, senior author on a paper in Nature Energy that describes the new catalyst. “Electrolysis – water splitting to produce renewable hydrogen and oxygen – is a compelling technology, but it needs further improvements in efficiency, cost, and longevity. This work offers a fresh strategy to pursue these critically important aims.”

Sargent’s lab is among several research groups around the world racing to create catalysts that lower the amount of electricity needed to split water into hydrogen and oxygen. Currently, the best-performing catalysts rely on platinum, a high-cost material, and operate under acidic conditions.

“Our new catalyst is made from copper, nickel and chromium, which are all more abundant and less costly than platinum,” says Cao-Thang Dinh, a co-lead author on the paper along with his fellow postdoctoral researchers Pelayo Garcia De Arquer and Ankit Jain. “But what’s most exciting is that it performs well under pH-neutral conditions, which opens up a number of possibilities.”

Seawater is the most abundant source of water on earth, Dinh points out. But using seawater with traditional catalysts under acidic conditions would require the salt to be removed first, an energy-intensive process. Operating at neutral pH avoids the high cost of desalination.

It could also enable the use of microorganisms to make chemicals such as methanol and ethanol. “There are bacteria that can combine hydrogen and CO2 to make hydrocarbon fuels,” says Garcia De Arquer. “They could grow in the same water and take up the hydrogen as it’s being made, but they cannot survive under acidic conditions.”

Using renewable energy to convert waste CO2 into fuels or other value-added products is the goal of the NRG COSIA Carbon XPrize. A team from Sargent’s lab is among the five finalists in the international competition, vying for the US $7.5-million grand prize.