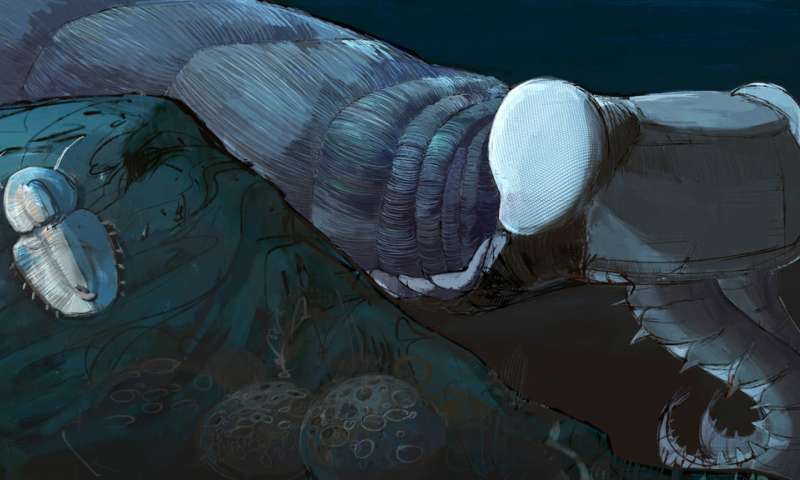 Reconstruction of the Cambrian predator and stem-lineage euarthropod Anomalocaris canadensis, based on fossils from the Burgess Shale, Canada. Credit: Reconstruction by Natalia Patkiewicz

All the major groups of animals appear in the fossil record for the first time around 540-500 million years ago—an event known as the Cambrian Explosion—but new research from the University of Oxford in collaboration with the University of Lausanne suggests that for most animals this ‘explosion’ was in fact a more gradual process.

The Cambrian Explosion produced the largest and most diverse grouping of animals the Earth has ever seen: the euarthropods. Euarthropoda contains the insects, crustaceans, spiders, trilobites, and a huge diversity of other animal forms alive and extinct. They comprise over 80 percent of all animal species on the planet and are key components of all of Earth’s ecosystems, making them the most important group since the dawn of animals over 500 million years ago.

A team based at Oxford University Museum of Natural History and the University of Lausanne carried out the most comprehensive analysis ever made of early fossil euarthropods from every different possible type of fossil preservation. In an article published today in the Proceedings of the National Academy of Sciences they show that, taken together, the total fossil record shows a gradual radiation of euarthropods during the early Cambrian, 540-500 million years ago.

The new analysis presents a challenge to the two major competing hypotheses about early animal evolution. The first of these suggests a slow, gradual evolution of euarthropods starting 650-600 million years ago, which had been consistent with earlier molecular dating estimates of their origin. The other hypothesis claims the nearly instantaneous appearance of euarthropods 540 million years ago because of highly elevated rates of evolution.

The new research suggests a middle-ground between these two hypotheses, with the origin of euarthropods no earlier than 550 million years ago, corresponding with more recent molecular dating estimates, and with the subsequent diversification taking place over the next 40 million years.

“Each of the major types of fossil evidence has its limitation and they are incomplete in different ways, but when taken together they are mutually illuminating and allow a coherent picture to emerge of the origin and radiation of the euarthropods during the lower to middle Cambrian,” explains Professor Allison Daley, who carried out the work at Oxford University Museum of Natural History and at the University of Lausanne. “This indicates that the Cambrian Explosion, rather than being a sudden event, unfolded gradually over the ~40 million years of the lower to middle Cambrian.”

The timing of the origin of Euarthropoda is very important as it affects how we view and interpret the evolution of the group. By working out which groups developed first we can trace the evolution of physical characteristics, such as limbs.

It has been argued that the absence of euarthropods from the Precambrian Period, earlier than around 540 million years ago, is the result of a lack of fossil preservation. But the new comprehensive fossil study suggests that this isn’t the case.

“The idea that arthropods are missing from the Precambrian fossil record because of biases in how fossils are preserved can now be rejected,” says Dr. Greg Edgecombe FRS from the Natural History Museum, London, who was not involved in the study. “The authors make a very compelling case that the late Precambrian and Cambrian are in fact very similar in terms of how fossils preserve. There is really just one plausible explanation—arthropods hadn’t yet evolved.”

Harriet Drage, a Ph.D. student at Oxford University Department of Zoology and one of the paper’s co-authors, says: “When it comes to understanding the early history of life the best source of evidence that we have is the fossil record, which is compelling and very complete around the early to middle Cambrian. It speaks volumes about the origin of euarthropods during an interval of time when fossil preservation was the best it has ever been.”