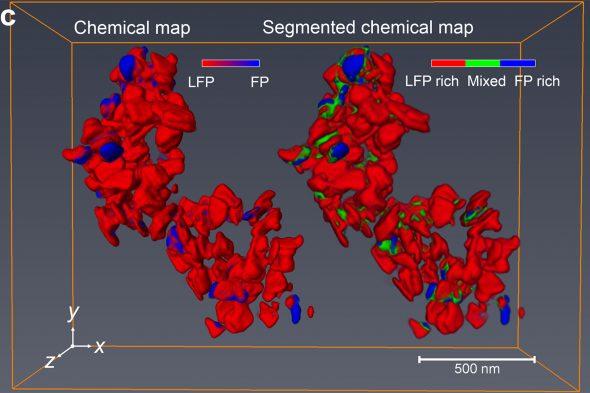 Researchers from the University of Illinois at Chicago and Lawrence Berkeley National Laboratory have developed a new technique that lets them pinpoint the location of chemical reactions happening inside lithium-ion batteries in three dimensions at the nanoscale level. Their results are published in the journal Nature Communications.

“Knowing the precise locations of chemical reactions within individual nanoparticles that are participating in those reactions helps us to identify how a battery operates and uncover how the battery might be optimized to make it work even better,” said Jordi Cabana, associate professor of chemistry at UIC and co-corresponding author on the paper.

As a battery charges and discharges, its electrodes — the materials where the reactions that produce energy take place — are alternately oxidized and reduced. The chemical pathways by which these reactions take place help determine how quickly a battery becomes depleted.

“Being able to tell if there is a tendency for a reaction to take place in a specific part of the electrode, and better yet, the location of reactions within individual nanoparticles in the electrode, would be extremely useful because then you could understand how those localized reactions correlate with the behavior of the battery, such as its charging time or the number of recharge cycles it can undergo efficiently,” Cabana said.

The new technique, called X-ray ptychographic tomography, came about through a partnership between chemists at UIC and scientists at the Advanced Light Source, at Lawrence Berkeley National Laboratory in California. Advanced Light Source scientists developed the instrumentation and measurement algorithms, which were used to help answer fundamental questions about battery materials and behavior identified by the UIC team.

Together, the two teams used the tomographic technique to look at tens of nanoparticles of lithium-iron phosphate recovered from a battery electrode that had been partially charged. The researchers used a coherent, nanoscale beam of X-rays generated by the high-flux synchrotron accelerator at the Advanced Light Source to interrogate each nanoparticle. The pattern of absorption of the beam by the material gave the researchers information about the oxidation state of iron in the nanoparticles in the X-ray beam. Because they were able to move the beam just a few nanometers over and run their interrogation again, the team could reconstruct chemical maps of the nanoparticles with a resolution of about 11 nanometers. By rotating the material in space, they could create a three-dimensional tomographic reconstruction of the oxidation states of each nanoparticle. In other words, they could tell the extent to which an individual nanoparticle of lithium iron phosphate had reacted.

“Using our new technique, we could not only see that individual nanoparticles showed different extents of reaction at a given time, but also how the reaction worked its way through the interior of each nanoparticle,” Cabana said.