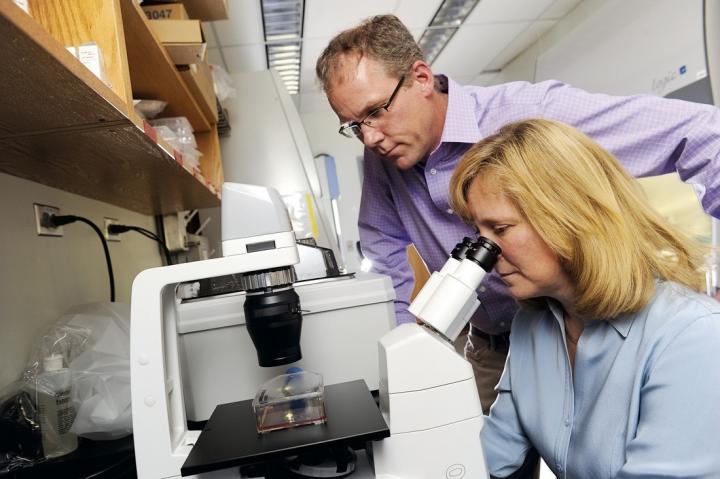 This is Troy Randall and Frances Lund. Credit: UAB

Seasonal influenza vaccines are typically less than 50 percent effective, according to Centers for Disease Control and Prevention studies. Research at the University of Alabama at Birmingham, published this week in Nature Immunology, may point a path to more effective vaccines.

Researchers led by Troy Randall, Ph.D., professor in the UAB Department of Medicine’s Division of Clinical Immunology and Rheumatology, studied a type of immune cell in the lung called a resident memory B cell. Up to now, it had not been clear if these cells might be useful to combat influenza infections or even if they existed at all.

“These data demonstrate that lung-resident memory B cells are an important component of immunity to respiratory viruses like influenza,” Randall said. “They also suggest that vaccines designed to elicit highly effective, long-lived protection against influenza virus infection will need to deliver antigens to the respiratory tract.”

B cells, or B lymphocytes, are a class of white blood cells that can develop into antibody-secreting plasma cells or into dormant memory B cells. Specific antibodies produced by the infection-fighting plasma cells help neutralize or destroy viral or bacterial pathogens. Memory B cells “remember” a previous infection and are able to respond more quickly to a second infection by the same pathogen, and thus are part of durable immunity.

The crucial experiments to show that the non-circulating, influenza-specific memory B cells permanently resided in the lung involved parabiosis. A mouse of one strain was infected with influenza, then surgically connected with a different strain mouse six weeks later. After two weeks with a shared blood circulation, naïve B cells in the mediastinal lymph nodes and the spleens of both mice had equilibrated evenly among the two mice; but the memory B cells remained in the previously infected lung and did not migrate to the naïve lung.

Similar experiments of this type showed that inflammation in the naïve lung did not induce the lung memory cells to migrate to the inflamed naïve lung, and if each animal was infected with different strains of influenza, and then paired, the memory B cells for each strain of influenza remained in the lungs infected with that strain. The researchers also found — by shortening the time between infection and pairing — that the lung-resident memory B cells were established within two weeks of influenza infection.