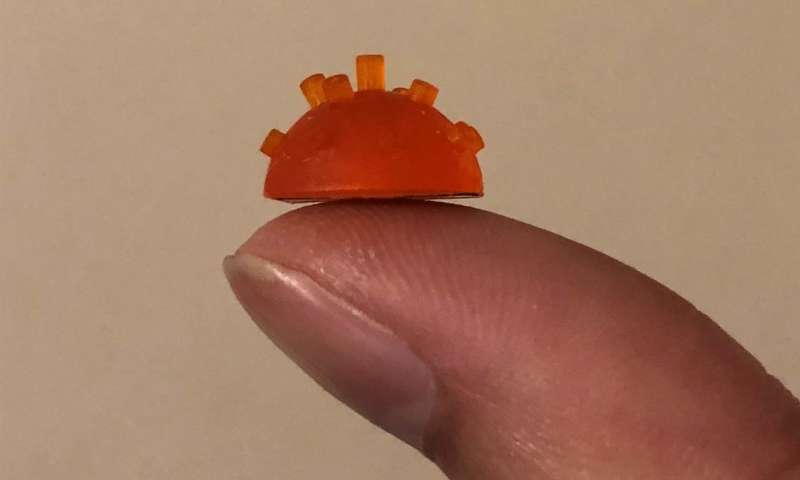 A miniaturised version of a musical instrument that could be used to improve the quality of medical images has been manufactured by researchers at the University of Strathclyde.

The Science and Engineering researchers have created a miniaturised pipe organ, based on the wide range of pipes seen in the full-sized instrument.

The device has been designed to improve images, such as those of foetuses, from scanners by broadening the range of frequencies used to emit sound waves. The researchers have demonstrated its ability to produce these frequencies and have created the best designs for the organ by using a 3-D printer.

The study has been published in the journal IEEE Transactions on Ultrasonics, Ferroelectrics, and Frequency Control.

Professor Tony Mulholland, Head of Strathclyde’s Department of Mathematics & Statistics and a partner in the research, said: “Musical instruments have a wide variety of designs but they all have one thing in common – they emit sound across a broad range of frequencies. So there is a treasure trove of design ideas for future medical imaging sensors lying waiting to be discovered amongst this vast array of designs.

“Around 20% of medical scans are performed using ultrasound. The scanner creates images by emitting sound waves with a frequency that lies above human hearing. The scanner operates at a single frequency—similar to a piano that can play just one note- and this accounts in part for the relatively poor resolution that one sees in ultrasound images.

“If we had a scanner that could emit waves across a broad range of frequencies, this would provide a marked improvement in the imaging capability.”

“Musical instruments create sounds over a broad range of frequencies and have been carefully designed over the centuries to be very efficient at doing so. It is well known that the highest frequency pipes are the smallest in length, as in, for example, a piccolo, so to realise frequencies that are beyond human hearing—ultrasound waves—the length has to be very small indeed, of millimetres in length.

“This would be extremely difficult to construct using traditional manufacturing techniques such as those used to build musical instruments but the key is to use a high resolution 3-D printer.”

The multidisciplinary team of researchers developed and tested the designs using mathematical models and computer simulations to speed up the design process.

While its development is at an early stage, the technology could also have significant implications in the design of hearing aids, in underwater sonar and the non-destructive testing of safety critical structures such as nuclear plants.