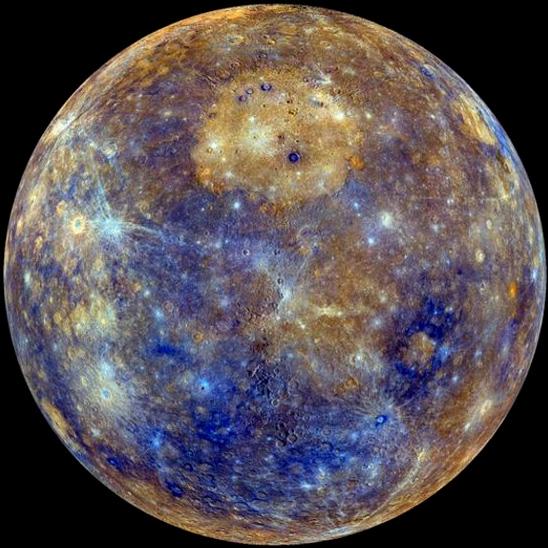 Enhanced color image of Mercury. The bright, circular deposit in the upper center of the image is an enormous effusive volcanic deposit, situated within the largest impact crater on the planet, the Caloris basin. Source: NASA/Johns Hopkins Applied Physics Lab/Carnegie Institution of Washington

New research from North Carolina State University finds that major volcanic activity on the planet Mercury most likely ended about 3.5 billion years ago. These findings add insight into the geological evolution of Mercury in particular, and what happens when rocky planets cool and contract in general.

There are two types of volcanic activity: effusive and explosive. Explosive volcanism is often a violent event that results in large ash and debris eruptions, such as the Mount Saint Helens eruption in 1980. Effusive volcanism refers to widespread lava flows that slowly pour out over the landscape — believed to be a key process by which planets form their crusts.

NC State assistant professor and planetary geologist Paul Byrne and colleagues determined when the bulk of Mercury’s crust-forming volcanism ended by using photographs of the surface imaged by NASA’s MESSENGER mission. Because there are no physical samples from the planet that could be used for radiometric dating, the researchers used crater size-frequency analysis, in which the number and size of craters on the planet’s surface are placed into established mathematical models, to calculate absolute ages for effusive volcanic deposits on Mercury.

According to their results, major volcanism on Mercury stopped at around 3.5 billion years ago, in stark contrast to the volcanic ages found for Venus, Mars and Earth.

“There is a huge geological difference between Mercury and Earth, Mars or Venus,” Byrne says. “Mercury has a much smaller mantle, where radioactive decay produces heat, than those other planets, and so it lost its heat much earlier. As a result, Mercury began to contract, and the crust essentially sealed off any conduits by which magma could reach the surface.

“These new results validate 40-year-old predictions about global cooling and contraction shutting off volcanism,” Byrne continues. “Now that we can account for observations of the volcanic and tectonic properties of Mercury, we have a consistent story for its geological formation and evolution, as well as new insight into what happens when planetary bodies cool and contract.”

The research appears in Geophysical Research Letters, with co-authors from the Carnegie Institution of Washington, Mount Holyoke College, the University of Georgia, Southwest Research Institute and Brown University. The MESSENGER mission provided substantial funding for this work.