MXenes are a family of emerging two-dimensional (2D) materials that present intriguing properties such as high conductivity, impressive mechanical strength, and hydrophilicity, to name a few.[1] Chemically, MXenes are derived from the layered ternary formula Mn+1AXn composed of two or more layers of transition metals (M element), an “A” layer (Al, Si, Ge), and carbon and nitrogen layers (X element) which occupy the octahedral sites between the neighbor transition metal sites.[2]

MXene was first achieved by a top-down synthetic method to selectively etch the “A” layer element using hydrofluoric acid (HF).[3] Since then, several creative and innovative routes have been developed to prepare various types of MXene materials.[4]

Multi-layered stacked MXenes: These MXenes are available as dried powder or wet-paste, depending on the work-up procedures. Both forms share the same preparation route in which the concentrated HF preferentially etches, for instance, the Ti-Al bond in the Ti3AlC2 MAX phases.

MilliporeSigma offers MAX-phase materials for the syntheses of MXenes. Optical properties: The optical performance of MXenes is governed by their chemical structures, particularly the M and X elements. Several MXenes exhibit significantly distinguished absorption and reflection spectra[10] and attractive plasmonic properties, such as Ti3C2Tx. Unlike other 2D materials, the plasmons generated from the MXene surface were independent of the layer thickness. The color of colloidal solution of Ti3C2 MXene and its corresponding freestanding film.

Electronic and electrical properties: The electronic properties of MXenes are related closely to their chemical composition and structures. Although MXenes are generally considered conductive, the conductivity of each individual MXene differs vastly. Surface terminal groups, the size of the MXene sheets in both the longitudinal and transversal directions, and defects in the materials caused by the HF etching process[11] control the conductivity of the MXene materials.

Summary of the electrical conductivity for various MXene nanocomposites (adapted from ref. 11)

Energy storage: The use of MXenes as battery materials has been in focus in both experimental studies and theoretical calculations.[12] For instance, a series of MXene materials have been simulated and screened for their hypothetical maximum gravimetric capacities. In this regard, those MXenes with low “n” numbers in the formula, such as Ti2C, Nb2C, and V2C, possess higher gravimetric capacities compared with their M3X2 and M4X3 counterparts. In addition, MXenes can host ions of various sizes within their 2D lamellar cavities. Thus, MXenes materials provide more options for researchers investigating Na-, K-, Mg-, Ca-, and Al-ion batteries. Photocatalysis: Research in solar energy conversion continues to grow. A series of 2D materials, such as graphene, transition metal dichalcogenides (MoS2, WS2, est.), hexagonal boron nitrides (h-BN), black phosphorous, germanene, graphitic carbon nitrides (g-C3N4), have been evaluated as photocatalysts for solar-to-chemical energy conversion applications. Since discovering MXenes, these emerging 2D materials have become a worthy contender for enhancing the efficacy of semiconductor photocatalysts due to their high surface area and high electronic conductivity. MXenes act as suitable electron acceptors to suppress the charge carriers’ recombination process.[13] When MXenes are incorporated into a photocatalytic system containing metal with higher electron affinity, they can also function as hole acceptors.[14] In addition, due to their negatively charged surfaces, MXenes provide soils for the metal cations and allow these metal ions to grow into semiconductor species for photocatalytic reactions.[15] Biomedical: The surface terminal groups of MXenes make them effective drug delivery carriers.[16] In addition, the remarkable biocompatibility and low cytotoxicity of most MXene compositions, such as Ti3C2Tx,[17] Nb2CTx,[18] and Ta4C3Tx,[19] allow for in vivo applications. Furthermore, their plasmon resonance and high photothermal conversion efficiency in the near-IR and IR range make these materials promising for cancer theragnostic.[20] For instance, Ta4C3Tx has attracted particular attention because of its higher photothermal efficiency (~44.7%) than Ti3C2Tx. Environmental remediation: Due to their inherent hydrophilicity, adsorptive, and antibacterial properties, MXenes have also been extensively investigated as an effective approach for toxic metal removal in wastewater purification. The abundance of surface terminal groups, such as -O and -OH, synergized with the intrinsic 2D structure, contribute to the unique physiochemical merits of MXenes as accessible and processible materials for water decontamination. Various researchers have validated that Ti3C2Tx MXenes have massive adsorption capacity and can effectively capture heavy metal ions, including Pb(II),[21] Cr(VI),[22] Hg(II),[23] and Ba(II)[24], in environmental remediation applications. Outlook and perspective: Although research on MXenes is still in the early phases, the outlook is promising for these emerging 2D materials. Concentrated efforts in materials synthesis, new MAX/MXene phase explorations, and computational screening and prediction, have contributed to identifying new applications for MXenes, including 5G communication, smart textiles, optoelectronics, physical or chemical sensors, piezoelectric, and triboelectric generators. For more information on MXenes, please refer to our recent webinar with Prof. Gogotsi. 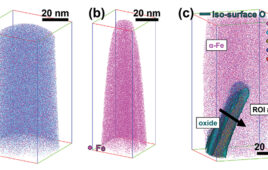 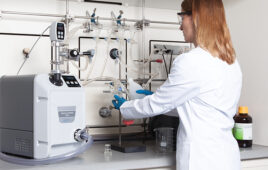 A Breakthrough in Dry Vacuum Technology How LG Electronics Plans to Accelerate Innovation with AI-Powered Simulation Automating an ELISA assay for the characterization of antibody functionality