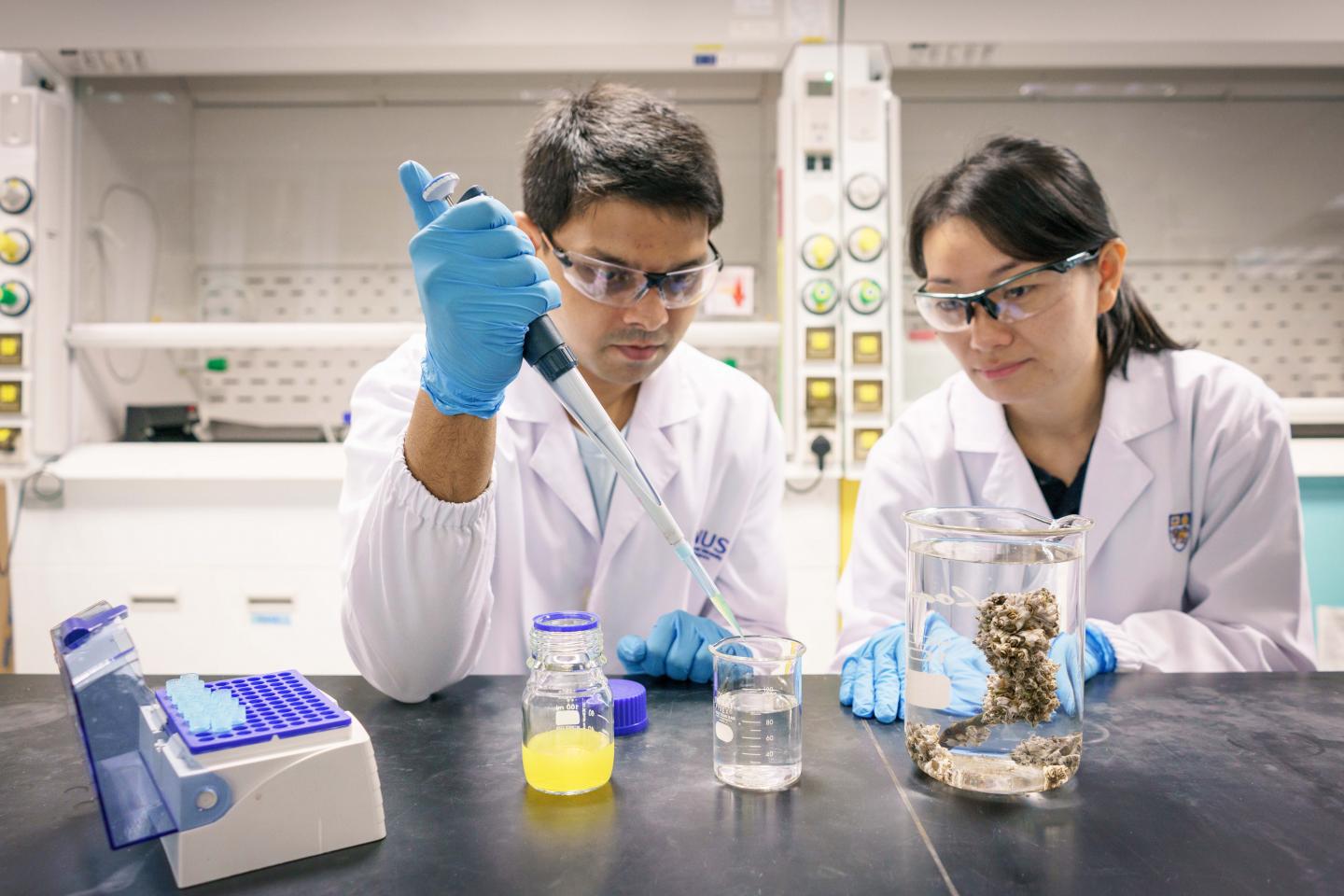 A research team from the National University of Singapore discovered that nanoplastics are easily ingested by barnacle larvae and they can accumulate in the bodies of the larvae over time. Mr Samarth Bhargava (left) and Ms Serina Lee (right) are members of the research team.

Plastic nanoparticles - these are tiny pieces of plastic less than 1 micrometre in size - could potentially contaminate food chains, and ultimately affect human health, according to a recent study by scientists from the National University of Singapore (NUS). They discovered that nanoplastics are easily ingested by marine organisms, and they accumulate in the organisms over time, with a risk of being transferred up the food chain, threatening food safety and posing health risks.

Ocean plastic pollution is a huge and growing global problem. It is estimated that the oceans may already contain over 150 million tonnes of plastic, and each year, about eight million tonnes of plastic will end up in the ocean. Plastics do not degrade easily. In the marine environment, plastics are usually broken down into smaller pieces by the sun, waves, wind and microbial action. These micro- and nanoplastic particles in the water may be ingested by filter-feeding marine organisms such as barnacles, tube worms and sea-squirts.

Using the acorn barnacle Amphibalanus amphitrite as a model organism, the NUS research team demonstrated for the first time that nanoplastics consumed during the larval stage are retained and accumulated inside the barnacle larvae until they reach adulthood.

"We opted to study acorn barnacles as their short life cycle and transparent bodies made it easy to track and visualise the movement of nanoplastics in their bodies within a short span of time," said Mr Samarth Bhargava, a PhD student from the Department of Chemistry at the NUS Faculty of Science, who is the first author of the research paper.

"Barnacles can be found in all of the world's oceans. This accumulation of nanoplastics within the barnacles is of concern. Further work is needed to better understand how they may contribute to longer term effects on marine ecosystems," said Dr Serena Teo, Senior Research Fellow from the Tropical Marine Science Institute at NUS, who co-supervised the research.

Studying the fate of nanoplastics in marine organisms

The NUS research team incubated the barnacle larvae in solutions of their regular feed coupled with plastics that are about 200 nanometres in size with green fluorescent tags. The larvae were exposed to two different treatments: 'acute' and 'chronic'.

Under the 'acute' treatment, the barnacle larvae were kept for three hours in a solution that contained 25 times more nanoplastics than current estimates of what is present in the oceans. On the other hand, under the 'chronic' treatment, the barnacle larvae were exposed to a solution containing low concentrations of nanoplastics for up to four days.

The larvae were subsequently filtered from the solution, and examined under the microscope. The distribution and movement of the nanoplastics were monitored by examining the fluorescence from the particles present within the larvae over time.

"Our results showed that after exposing the barnacle larvae to nanoplastics in both treatments, the larvae had not only ingested the plastic particles, but the tiny particles were found to be distributed throughout the bodies of the larvae," said Ms Serina Lee from the Tropical Marine Science Institute at NUS, who is the second author of the paper.

Even though the barnacles' natural waste removal pathways of moulting and excretion resulted in some removal of the nanoplastics, the team detected the continued presence of nanoplastics inside the barnacles throughout their growth until they reached adulthood.

"Barnacles may be at the lower levels of the food chain, but what they consume will be transferred to the organisms that eat them. In addition, plastics are capable of absorbing pollutants and chemicals from the water. These toxins may be transferred to the organisms if the particles of plastics are consumed, and can cause further damage to marine ecosystems and human health," said marine biologist Dr Neo Mei Lin from the Tropical Marine Science Institute at NUS, who is one of the authors of the paper.

The team's research findings were first published online in the journal ACS Sustainable Chemistry & Engineering in March 2018. The study was funded under the Marine Science Research and Development Programme of the National Research Foundation Singapore.

The NUS research team seeks to further their understanding of the translocation of nanoparticles within the marine organisms and potential pathways of transfer in the marine ecosystem.

"The life span and fate of plastic waste materials in marine environment is a big concern at the moment owing to the large amounts of plastic waste and its potential impact on marine ecosystem and food security around the world. The team would like to explore such topics in the near future and possibly to come up with pathways to address such problems," explained Associate Professor Suresh Valiyaveettil from the Department of Chemistry at the NUS Faculty of Science, who co-supervised the research.

The team is currently examining how nanoplastics affect other invertebrate model organisms to understand the impact of plastics on marine ecosystems.