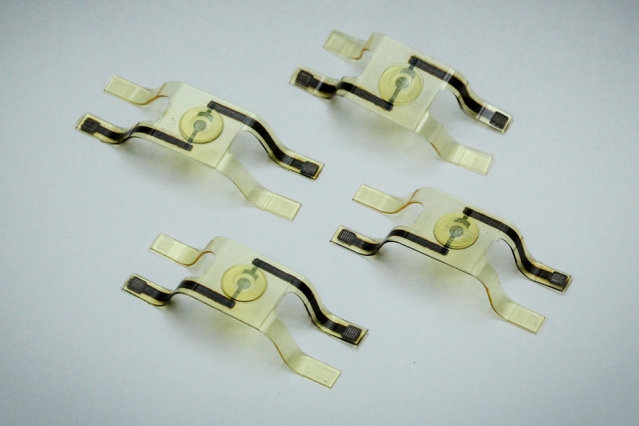 A new method produces a printable structure that begins to fold itself up as soon as it’s peeled off the printing platform. Courtesy of the researchers

Structures created by 3D printers that can fold themselves could lead to a number of new applications, including 3D printable robots.

Researchers from the Massachusetts Institute of Technology (MIT) have developed a printable structure that begins to fold itself up after it is peeled off a printing platform without any outside stimulus, which could lead to a wider range of materials and more delicate structures.

“If you want to add printed electronics, you’re generally going to be using some organic materials because a majority of printed electronics rely on them,” Subramanian Sundaram, an MIT graduate student in electrical engineering and computer science and first author on the paper, said in a statement. “These materials are often very, very sensitive to moisture and temperature.

“So if you have these electronics and parts and you want to initiate folds in them, you wouldn’t want to dunk them in water or heat them because then your electronics are going to degrade.”

The researchers built a self-folding printable prototype device that includes electrical leads and a polymer pixel that changes from transparent to opaque when a voltage is applied to it.

The device looks similar to the letter “H” with each leg of the device folding itself in two different directions to produce a tabletop shape.

They then built several different versions of the same hinge design to show that they can control the precise angle at which a joint can fold.

During testing, the team attached the hinges to a weight to forcibly straighten them. However, when the weight was removed the hinges resumed to their original folds.

The expanding material was deposited at precise locations in either the top or bottom few layers of the printed device.

The bottom layer adheres slightly to the printer platform and the adhesion holds the device flat as the layers are built up.

However, when the finished device is peeled off the platform, the joints made from the new material begin to expand and bend the device in the opposite direction.

The ink that produced the most forceful expansion included several long molecular chains and one significantly shorter chain comprised of the monomer isooctyl acrylate.

After being exposed to ultraviolet light, the long chains connect to each other to produce a rigid thicket of tangled molecules.

When another layer of the material is deposited on top of the first, the small chains of isooctyl acrylate in the top, liquid layer sink down into the lower, more rigid layer, where they interact with the longer chains to exert an expansive force.

This new technique could enable the custom manufacture of sensors, displays or antennas whose functionality depends on their 3D shape and eventually can result in printable robots.