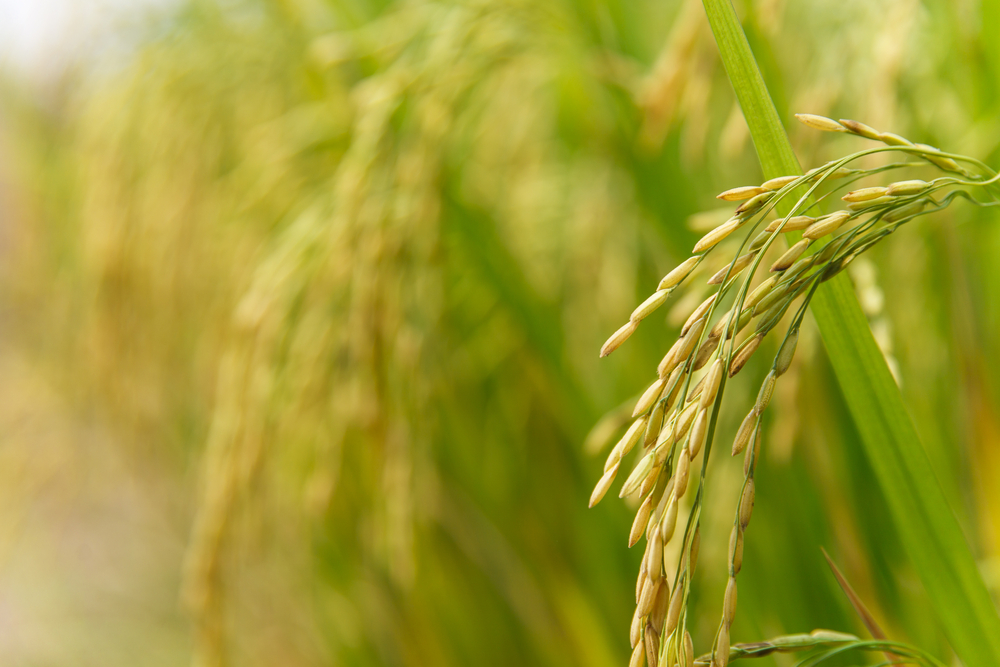 Nitrogen fertilizers (applied as nitrate, NO3-, or ammonium, NH4+) improve the amount of grain produced per acre, but nitrogen runoff and volatilization pollute the water and the air. Production of nitrogen fertilizers also uses fossil fuels. The major grain crops (such as rice and wheat) use only about 40% of the applied fertilizer–the rest is lost to the air, water, and soil microbes. Application of nitrogen fertilizers delays flowering, leaving crops vulnerable to late-season cold weather, which can impair grain filling. Traits that increase the amount of grain produced by plants and allow the grain crop to mature early will improve yields and also important for both double/triple cropping systems and for increasing the geographical range of rice into higher latitude regions. Although these traits will prove valuable for grain crops, crop breeders have had little success in this area.

Now, recent work in the key staple crop rice (Oryza sativa) identified a nitrate transporter (NRT) that may provide a solution to the nitrogen use/flowering problem. In the plant, different NRTs move nitrogen from the soil into the roots and move nitrogen compounds throughout the plant. Some also NRTs sense nitrogen levels and trigger responses. A study by Wang et al., published in The Plant Cell, showed that rice OsNRT1.1A can affect both nitrogen use and flowering time. Mutant lines lacking this transporter showed decreased utilization of nitrate and ammonium. The mutants showed lower induction of genes related to the uptake and transport of nitrate and ammonia; this indicated that OsNRT1.1A acts as both a transporter and a sensor of nitrogen in plants. Interestingly, the mutants produced 80% less grain than regular rice and flowered later.

To improve yield and flowering time, the authors made rice lines that produced extra OsNRT1.1A. The OsNRT1.1A-overexpressing plants grew taller, were greener, and produced more biomass, compared with regular rice grown on the same amount of nitrogen. These plants also pulled more nitrate and ammonium out of the medium in hydroponics experiments. In multi-year field trials, the OsNRT1.1A-overexpressing plants showed improved yields of more than 30% (and up to 60%) in fields with high and low levels of nitrogen fertilization. Moreover, these plants flowered one to two weeks earlier than the control rice plants.

Corresponding author Chengcai Chu states “For about 100 years, the use of N fertilizers has been one of the most effective forces driving crop yield improvements. It is estimated that more than 120 million tons of nitrogen is used worldwide as fertilizer annually, which largely contributes to nitrogen pollution. Application of N at high rates also brings detrimental effects to crops such as delayed flowering and thus prolonged maturation times. OsNRT1.1A may provide a solution to the conflict between increasing N nutrition and early maturation time, which are the two most desirable traits for agriculture production”.

Intriguingly, overexpression of this NRT from a grass species also improved seed yields and nitrogen use in a broad-leafed plant, the model dicot Arabidopsis. These promising results shown in the lab and validated in multiple years and multiple locations in the field indicate that manipulation of OsNRT1.1A expression has the potential to increase yields and accelerate flowering, two of the most important traits sought in plant breeding efforts in a great many crop species.