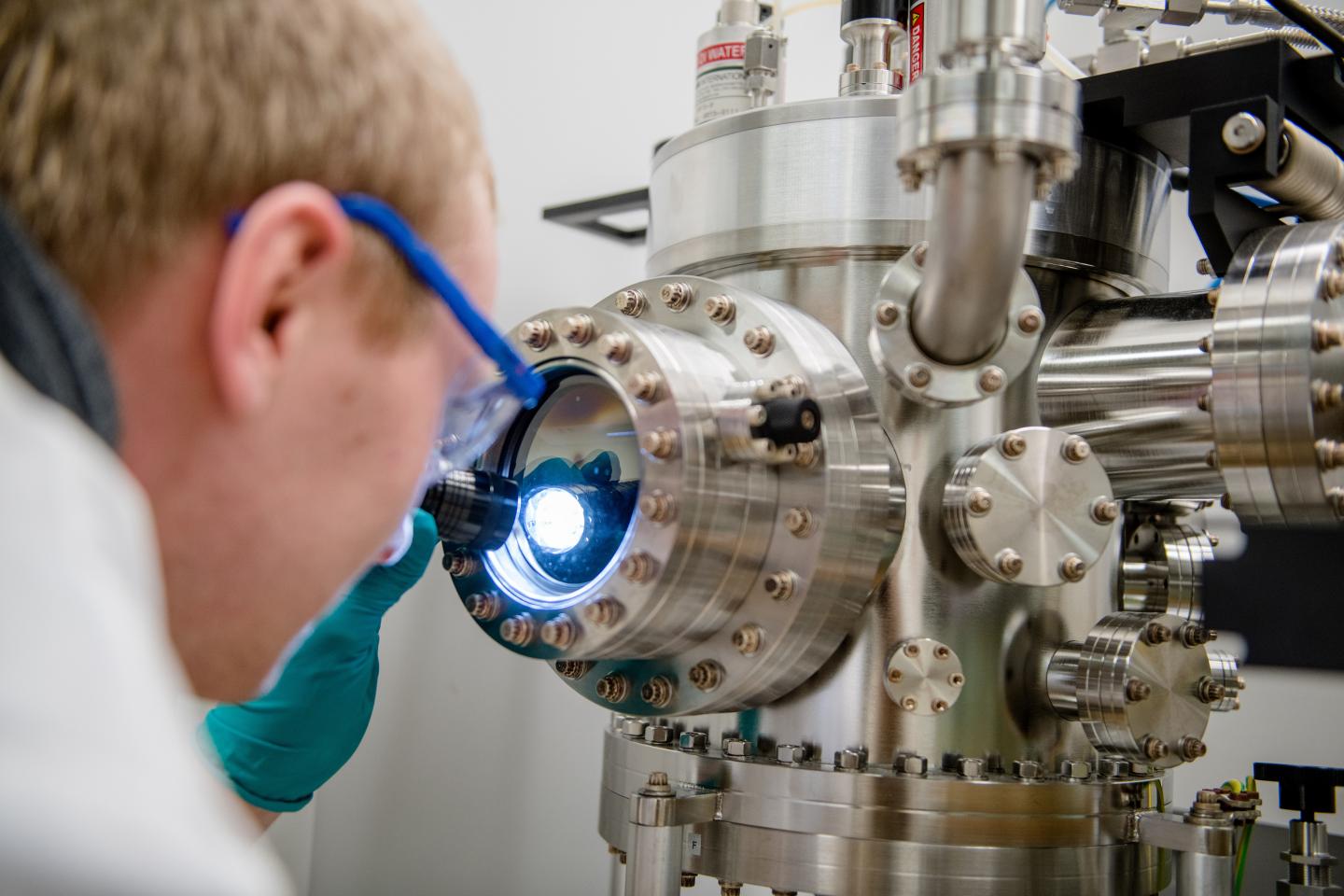 Michael Meischein in front of the sputter system in which nanoparticles are fabricated by co-deposition into an ionic liquid Credit: RUB, Marquard

Numerous chemical reactions relevant for the energy revolution are highly complex and result in considerable energy losses. This is the reason why energy conversion and storage systems or fuel cells are not yet widely used in commercial applications. Researchers at Ruhr-Universität Bochum (RUB) and Max-Planck-Institut für Eisenforschung in Düsseldorf are now reporting on a new class of catalysts that is theoretically suitable for universal use. These so-called high entropy alloys are formed by mixing close to equal proportions of five or more elements. They might finally push the boundaries of traditional catalysts that have been unsurpassable for decades. The research team describes their uncommon electrocatalytic working principles as well as their potential for systematic application in the journal “ACS Energy Letters” from 17. April 2019.

The material class of high entropy alloys features physical properties that have considerable potential for numerous applications. In oxygen reduction, they have already reached the activity of a platinum catalyst.

“At our department, we have unique methods at our disposal to manufacture these complex materials from five source elements in different compositions in form of thin film or nanoparticle libraries,” explains Professor Alfred Ludwig from the Chair of Materials for Microtechnology at RUB. The atoms of the source elements blend in plasma and form nanoparticles in a substrate of ionic liquid. If the nanoparticles are located in the vicinity of the respective atom source, the percentage of atoms from that source is higher in the respective particle. “Very limited research has as yet been conducted into the usage of such materials in electrocatalysis,” says Ludwig.

This is expected to change in the near future. The researchers have postulated that the unique interactions of different neighbouring elements might pave the way for replacing noble metals with equivalent materials. “Our latest research has unearthed other unique characteristics, for example the fact that this class may also affect the interdependencies among individual reaction steps,” says Tobias Löffler, PhD researcher at the Center for Electrochemical Sciences at the RUB Chair of Analytical Chemistry. “Thus, it would contribute to solving one of the major problems of many energy conversion reactions, namely otherwise unavoidable great energy losses. The theoretical possibilities seem almost too good to be true.”

In order to promote rapid progress, the team from Bochum and Düsseldorf has described its initial findings with the aim of interpreting first characteristic observations, outlining the challenges, and putting forward first guidelines – all of which are conducive to advancing research. “The complexity of the alloy is reflected in the research results, and many analyses will be necessary before one can assess its actual potential. Still, none of the findings to date precludes a breakthrough,” supposes Professor Wolfgang Schuhmann, Chair of Analytical Chemistry at RUB.

The characterisation of catalyst nanoparticles, too, is conducive to research. “In order to gain an indication of how, exactly, the activity is affected by the structure, high-resolution visualisation of the catalyst surface on the atomic level is a helpful tool, preferably in 3D,” says Professor Christina Scheu from Max-Planck-Institut für Eisenforschung in Düsseldorf. Researchers have already demonstrated that this is an attainable goal – if not yet applied to this class of catalysts.

The question if such catalysts will facilitate the transition to sustainable energy management remains to be answered. “With our studies, we intend to lay the foundation for ongoing research in this field,” conclude the authors.