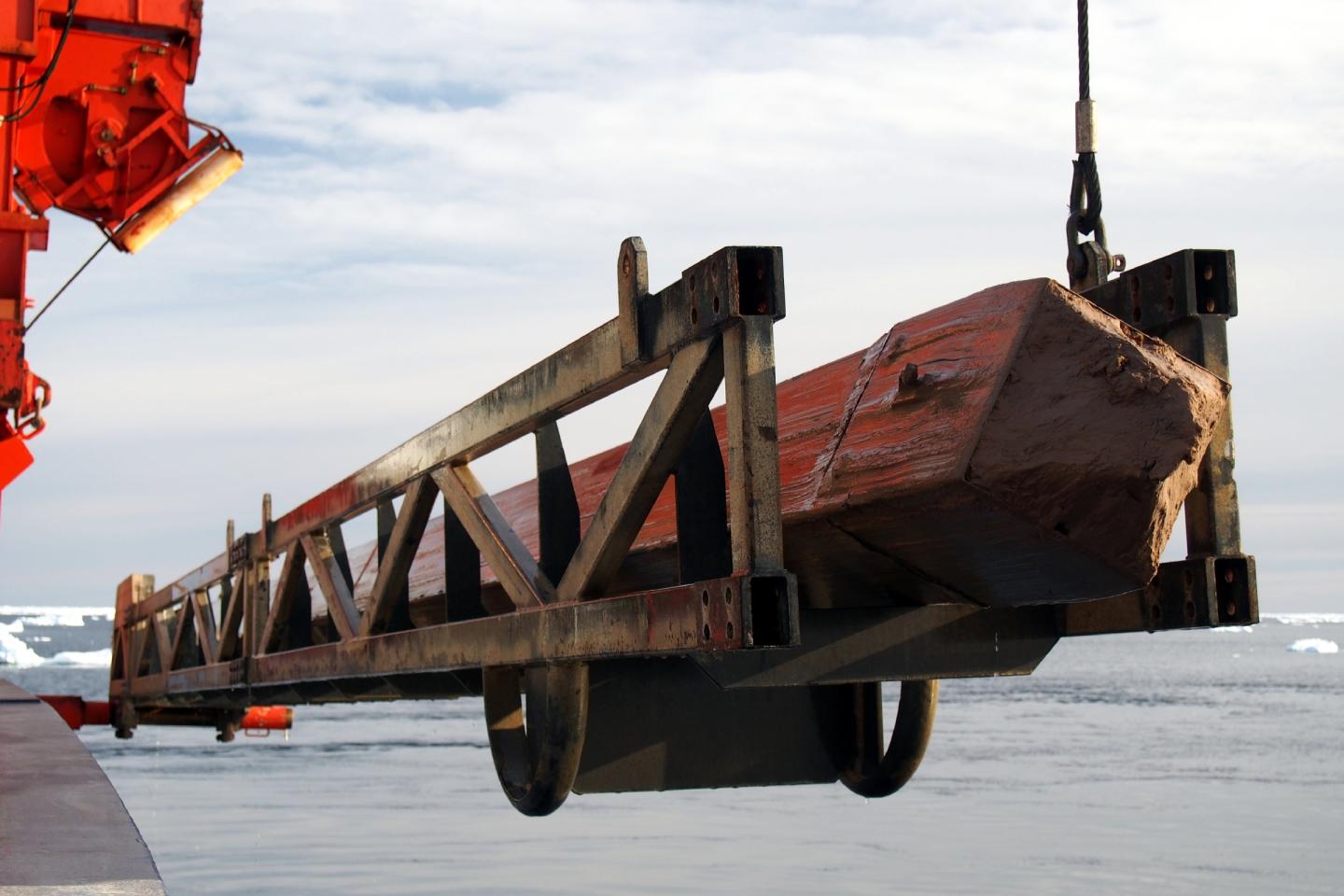 This is the Kasten corer on board the German RV Polarstern. Source: Alfred-Wegener-Institut / Maciej Telesinski

Temperatures in the Arctic are currently climbing two to three times faster than the global average. The result – and, thanks to feedback effects, also the cause – is dwindling sea ice. In a study published in the actual volume of Nature Communications, geo- and climate researchers at the Alfred-Wegener Institute, Helmholtz Centre for Polar- and Marine Research (AWI) show that, in the course of our planet’s history, summertime sea ice was to be found in the central Arctic in periods characterised by higher global temperatures – but less CO2 – than today.

Prognoses for the future of the Arctic can only be as reliable as the models and data they’re based on. The scenarios projected by climate modellers vary greatly, and it remains unclear when we can expect to see the Arctic Ocean free of ice in the summer. At the same time, there is considerable public interest in dependable predictions concerning Arctic sea ice development over the next few decades, so as to have a basis for long-term strategic planning.

Researchers at the Alfred Wegener Institute have now more closely analysed the glacial history of the central Arctic with the help of sediment core data and climate simulations. Their findings indicate that the region was home to sea ice during the last interglacial, between 115,000 and 130,000 years ago. “Thanks to the sediment core data, we have clear evidence that, during the last interglacial roughly 125,000 years ago, the central Arctic Ocean was still covered with sea ice during the summer. In contrast, in an area to the northeast of Spitsbergen, the summertime sea ice virtually disappeared,” explains Prof Rüdiger Stein, a geologist at the Alfred Wegener Institute and first author of the Nature Communications study, adding, “This is also confirmed by the climate simulations run by AWI modellers involved in the study.”

However, comparing the results of the climate simulations for the most recent interglacial with scenario calculations for the future reveals substantial differences: thanks to the more intense solar radiation, back then the air temperatures at higher latitudes were also a few degrees higher than at present. However, the carbon dioxide concentration in the atmosphere – roughly 290 ppm (parts per million) – was ca. 110 ppm lower than the current level, as ice core data from the Antarctic shows. For their scenario calculations, the AWI modellers plugged in atmospheric CO2 concentrations in excess of 500 ppm, a level in keeping with the forecasts released by the Intergovernmental Panel on Climate Change (IPCC). Under these conditions, a disproportionately rapid retreat of summertime sea ice in the central Arctic Ocean over the course of the next few decades, followed by its complete disappearance – depending on how quickly CO2 levels rise – roughly 250 years from now, is to be expected. The outcomes of the study reveal the complexity of the processes shaping climate change in the Arctic and point to significant spatial and chronological variances in sea ice cover. To slow the warming of the Arctic and the permanent loss of sea ice, reducing the level of anthropogenic CO2 emissions in the atmosphere is vital.

For the purposes of their study, the researchers used what is referred to as “proxies” – indicators that contain information on past environmental conditions. They concentrated on organic proxies, also known as biomarkers. Some of these biomarkers are produced by certain species of algae, among which one group can only be found in open surface water, while the members of another group only live in sea ice (or did so in the Earth’s distant past). “When we confirm the presence of these algal biomarkers in our sediment layers, it allows us to draw conclusions on the depositional environment and the environmental conditions at the respective time,” says Stein. Since the biomarker groups they investigated are based on algae – i.e., on plants that require light for photosynthesis – the absence of both groups is an important indicator of a very thick and largely contiguous ice cover. Such conditions would make photosynthesis impossible, both for the algae in the surface water directly under the ice and those dwelling deeper in the ice close to the ice-water interface.

In addition to these valuable new insights into sea ice distribution during the last interglacial, the study also produced another exciting finding, one concerning the extent of circum-Arctic ice sheets during the Saale glaciation. As Stein relates, “Towards the end of the Saale glaciation (roughly 140,000 to 150,000 years ago), the glaciers most likely extended beyond the outer shelf. They produced masses of cold air that blew out to sea as powerful fall winds (katabatic winds) and created large expanses of open water (polynyas) – a process still frequently observed around the Antarctic continent.”

These conditions would seem to contradict the hypotheses put forward by international researchers (Jakobsson et al., 2016), who postulated in 2016 that the glaciers in North America and Eurasia expanded beyond the continental shelf during the Saale glaciation and into open water, covering the entire Arctic Ocean with a nearly kilometre-thick layer of solid ice. “Yet our biomarker data show acceptable living conditions for phytoplankton and sea ice algae, namely open waters and seasonal ice cover – a wide difference to kilometre-thick ice,” says Rüdiger Stein. However, the geologist goes on to explain, “That being said, a chronological sequence of extremely extended thick ice sheets (similar to what Jakobsson et al. have postulated) followed by sea ice formation with polynyas seems to be possible, as the initial results of our own investigations on the southern Lomonosov Ridge have shown. To finally approve this, however, further detailed investigations, especially of well dated sediment cores, are needed.”