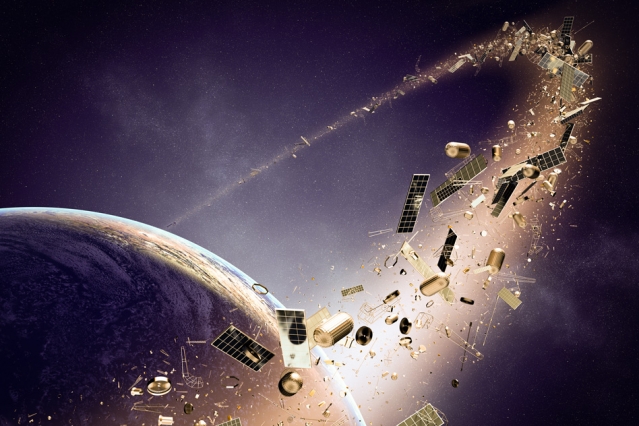 Aerospace engineers from MIT have developed a laser sensing technique that can decipher not only where but what kind of space junk may be passing overhead.

Hundreds of millions of pieces of space junk orbit the Earth daily, from chips of old rocket paint, to shards of solar panels, and entire dead satellites. This cloud of high-tech detritus whirls around the planet at about 17,500 miles per hour. At these speeds, even trash as small as a pebble can torpedo a passing spacecraft.

NASA and the U.S. Department of Defense are using ground-based telescopes and laser radars (ladars) to track more than 17,000 orbital debris objects to help prevent collisions with operating missions. Such ladars shine high-powered lasers at target objects, measuring the time it takes for the laser pulse to return to Earth, to pinpoint debris in the sky.

Now aerospace engineers from MIT have developed a laser sensing technique that can decipher not only where but what kind of space junk may be passing overhead. For example, the technique, called laser polarimetry, may be used to discern whether a piece of debris is bare metal or covered with paint. The difference, the engineers say, could help determine an object’s mass, momentum, and potential for destruction.

“In space, things just tend to break up over time, and there have been two major collisions over the last 10 years that have caused pretty significant spikes in debris,” says Michael Pasqual, a former graduate student in MIT’s Department of Aeronautics and Astronautics. “If you can figure out what a piece of debris is made of, you can know how heavy it is and how quickly it could deorbit over time or hit something else.”

Kerri Cahoy, the Rockwell International Career Development Associate Professor of aeronautics and astronautics, and an associate professor in the Department of Earth, Atmospheric, and Planetary Sciences at MIT, says the technique can easily be implemented on existing groundbased systems that currently monitor orbital debris.

“[Government agencies] want to know where these chunks of debris are, so they can call the International Space Station and say, ‘Big chunk of debris coming your way, fire your thrusters and move yourself up so you’re clear,’” Cahoy says. “Mike came up with a way where, with a few modifications to the optics, they could use the same tools to get more information about what these materials are made of.”

Pasqual and Cahoy have published their results in the journal IEEE Transactions on Aerospace and Electronic Systems.

The team’s technique uses a laser to measure a material’s effect on the polarization state of light, which refers to the orientation of light’s oscillating electric field that reflects off the material. For instance, when the sun’s rays reflect off a rubber ball, the incoming light’s electric field may oscillate vertically. But certain properties of the ball’s surface, such as its roughness, may cause it to reflect with a horizontal oscillation instead, or in a completely different orientation. The same material can have multiple polarization effects, depending on the angle at which light hits it.

Pasqual reasoned that a material such as paint could have a different polarization “signature,” reflecting laser light in patterns that are distinct from the patterns of, say, bare aluminum. Polarization signatures therefore could be a reliable way for scientists to identify the composition of orbital debris in space.

To test this theory, he set up a benchtop polarimeter — an apparatus that measures, at many different angles, the polarization of laser light as it reflects off a material. The team used a high-powered laser beam with a wavelength of 1,064 nanometers, similar to the lasers used in existing ground-based ladars to track orbital debris. The laser was horizontally polarized, meaning that its light oscillated along a horizontal plane. Pasqual then used polarization filtering optics and silicon detectors to measure the polarization states of the reflected light.

“We thought they were very representative of what you might find in space debris,” Pasqual says.

He placed each sample in the experimental apparatus, which was motorized so measurements could be made at different angles and geometries, and measured its polarization effects. In addition to reflecting light with same polarization as the incident light, materials can also display other, stranger polarization behaviors, such as rotating the light’s oscillation slightly — a phenomenon called retardance. Pasqual identified 16 main polarization states, then took note of which efffects a given material exhibited as it reflected laser light.

“Teflon had a very unique property where when you shine laser light with a vertical oscillation, it spits back some in-between angle of light,” Pasqual says. “And some of the paints had depolarization, where the material will spit out equal combinations of vertical and horizontal states.”

“There are already a lot of facilities on the ground for tracking debris as it is,” Pasqual says. “The point of this technique is, while you’re doing that, you might as well put some filters on your detectors that detect polarization changes, and it’s those polarization features that can help you infer what the material is made of. And you can get more information, basically for free.”