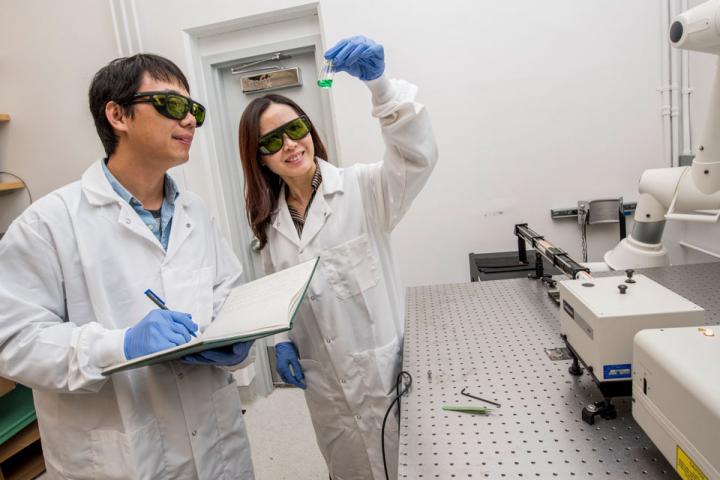 Berkeley Lab scientists Kaiyang Niu (left) and Haimei Zheng, principal investigator, developed a new photocatalyst of metal organic composites that can effectively convert carbon dioxide into the ingredients for fuel. They made the new material, held by Zheng in a glass vial, by exposing a precursor solution to laser irradiation. CREDIT

Scientists have developed a light-activated material that can chemically convert carbon dioxide into carbon monoxide without generating unwanted byproducts. The achievement marks a significant step forward in developing technology that could help generate fuel and other energy-rich products using a solar-powered catalyst while mitigating levels of a potent greenhouse gas.

When exposed to visible light, the material, a “spongy” nickel organic crystalline structure, converted the carbon dioxide (CO2) in a reaction chamber exclusively into carbon monoxide (CO) gas, which can be further turned into liquid fuels, solvents, and other useful products.

“We show a near 100 percent selectivity of CO production, with no detection of competing gas products like hydrogen or methane,” said Haimei Zheng, staff scientist in Berkeley Lab’s Materials Sciences Division and co-corresponding author of the study. “That’s a big deal. In carbon dioxide reduction, you want to come away with one product, not a mix of different things.”

Getting rid of the competition

In chemistry, reduction refers to the gain of electrons in a reaction, while oxidation is when an atom loses electrons. Among the well-known examples of carbon dioxide reduction is in photosynthesis, when plants transfer electrons from water to carbon dioxide while creating carbohydrates and oxygen.

Carbon dioxide reduction needs catalysts to help break the molecule’s stable bonds. Interest in developing catalysts for solar-powered reduction of carbon dioxide to generate fuels has increased with the rapid consumption of fossil fuels over the past century, and with the desire for renewable sources of energy.

Researchers have been particularly keen on eliminating competing chemical reactions in the reduction of carbon dioxide.

“Complete suppression of the competing hydrogen evolution during a photocatalytic CO2-to-CO conversion had not been achieved before our work,” said Zheng.

“When we changed the wavelength of the laser, we would get different composites,” said study co-lead author Kaiyang Niu, a materials scientist in Zheng’s lab. “That’s how we determined that the reactions were light-activated rather than heat-activated.”

The researchers characterized the structure of the material at the Molecular Foundry, a DOE Office of Science User Facility at Berkeley Lab. The nickel-organic photocatalyst had notable similarities to metal-organic frameworks, or MOFs. While MOFs have a regular crystalline structure with rigid linkers between the organic and inorganic components, this new photocatalyst incorporates a mix of soft linkers of varying lengths connected with nickel, creating defects in the architecture.

“The resulting defects are intentional, creating more pores and sites where catalytic reactions can occur,” said Niu. “This new material is more active and highly selective compared with MOFs made by traditional heating.”

Scientists at NTU tested the new material in a gas chamber filled with carbon dioxide, measuring the reaction products using gas chromatography and mass spectrometry techniques at regular time intervals. They determined that in an hour at room temperature, 1 gram of the nickel-organic catalyst was able to produce 16,000 micromoles, or 400 milliliters, of carbon monoxide. Moreover, they determined that the catalyst had a promising level of stability that allowed it to be used for an extended time.

The reduction of carbon dioxide by catalysts is not new, but other materials typically generate multiple chemicals in the process. The near-total production of carbon monoxide with this material represented a new level of selectivity and control, the researchers emphasized.

The researchers have some thoughts about how this selectivity occurs. They suggest that the architecture of their photocatalyst makes it easier for carbon dioxide anions to bind to reaction sites, leaving little space for hydrogen radicals to land. This would limit the proton transfers necessary to form hydrogen gas, the researchers said.

The researchers pushed the nickel-organic photocatalyst further by enriching it with rhodium or silver nanocrystals to create formic and acetic acids, respectively. Formic acid, found in ant venom and stinging nettles, and acetic acid, the main component of vinegar, are both used widely in industry. More importantly, the researchers noted, the molecules of these products are characterized by two-carbon links, a step toward the generation of higher-energy liquid fuels with more carbon bonds

“The world right now is in need of innovative ways to create alternatives to fossil fuels, and to stem the levels of excessive CO2 in the atmosphere,” said Zheng. “Converting CO2 to fuels using solar energy is a global research endeavor. The spongy nickel-organic photocatalyst we demonstrated here is a critical step toward practical production of high-value multi-carbon fuels using solar energy.”