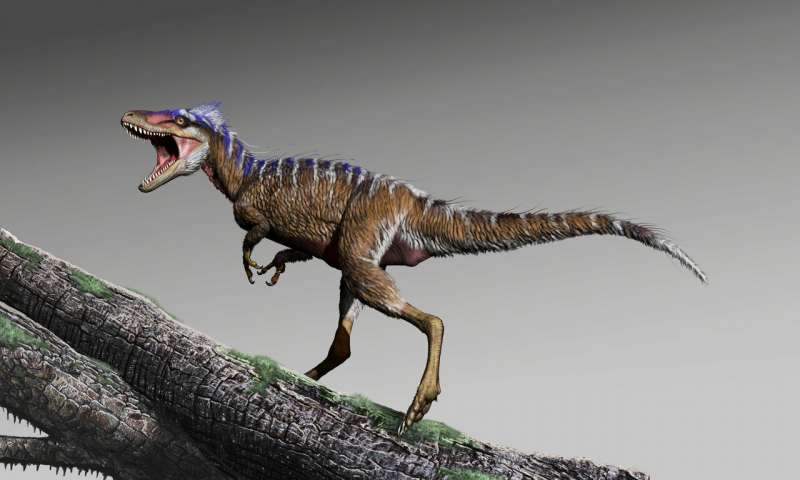 A newly discovered, diminutive—by T. rex standards—relative of the tyrant king of dinosaurs reveals crucial new information about when and how T. rex came to rule the North American roost.

Meet Moros intrepidus, a small tyrannosaur who lived about 96 million years ago in the lush, deltaic environment of what is now Utah during the Cretaceous period. The tyrannosaur, whose name means “harbinger of doom,” is the oldest Cretaceous tyrannosaur species yet discovered in North America, narrowing a 70-million-year gap in the fossil record of tyrant dinosaurs on the continent.

“With a lethal combination of bone-crunching bite forces, stereoscopic vision, rapid growth rates, and colossal size, tyrant dinosaurs reigned uncontested for 15 million years leading up to the end-Cretaceous extinction—but it wasn’t always that way,” says Lindsay Zanno, paleontologist at North Carolina State University, head of paleontology at the North Carolina Museum of Sciences and lead author of a paper describing the research. “Early in their evolution, tyrannosaurs hunted in the shadows of archaic lineages such as allosaurs that were already established at the top of the food chain.”

Medium-sized, primitive tyrannosaurs have been found in North America dating from the Jurassic (around 150 million years ago). By the Cretaceous—around 81 million years ago—North American tyrannosaurs had become the enormous, iconic apex predators we know and love. The fossil record between these time periods has been a blank slate, preventing scientists from piecing together the story behind the ascent of tyrannosaurs in North America. “When and how quickly tyrannosaurs went from wallflower to prom king has been vexing paleontologists for a long time,” says Zanno. “The only way to attack this problem was to get out there and find more data on these rare animals.”

That’s exactly what Zanno and her team did. A decade spent hunting for dinosaur remains within rocks deposited at the dawn of the Late Cretaceous finally yielded teeth and a hind limb from the new tyrannosaur. In fact, the lower leg bones of Moros were discovered in the same area where Zanno had previously found Siats meekerorum, a giant meat-eating carcharodontosaur that lived during the same period. Moros is tiny by comparison—standing only three or four feet tall at the hip, about the size of a modern mule deer. Zanno estimates that the Moros was over seven years old when it died, and that it was nearly full-grown.

But don’t let the size fool you. “Moros was lightweight and exceptionally fast,” Zanno says. “These adaptations, together with advanced sensory capabilities, are the mark of a formidable predator. It could easily have run down prey, while avoiding confrontation with the top predators of the day.

“Although the earliest Cretaceous tyrannosaurs were small, their predatory specializations meant that they were primed to take advantage of new opportunities when warming temperatures, rising sea-level and shrinking ranges restructured ecosystems at the beginning of the Late Cretaceous,” Zanno says. “We now know it took them less than 15 million years to rise to power.”

The bones of Moros also revealed the origin of T. rex’s lineage on the North American continent. When the scientists placed Moros within the family tree of tyrannosaurs they discovered that its closest relatives were from Asia. “T. rex and its famous contemporaries such as Triceratops may be among our most beloved cultural icons, but we owe their existence to their intrepid ancestors who migrated here from Asia at least 30 million years prior,” Zanno says. “Moros signals the establishment of the iconic Late Cretaceous ecosystems of North America.”

The research appears in Communications Biology, and was supported in part by Canyonlands Natural History Association. Lecturer Terry Gates, postdoctoral research scholar Aurore Canoville and graduate student Haviv Avrahami from NC State, as well as the Field Museum’s Peter Makovicky and Ryan Tucker from Stellenbosch University, contributed to the work.