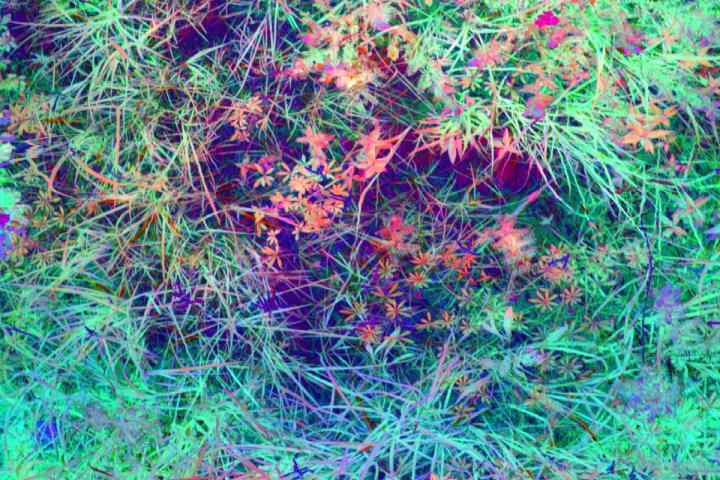 An example of the type of images captured by the imaging spectrometer. By exploring the colours of light reflected by the plants, researchers are able to identify subtle differences in plant function. Red represents sun induced fluorescence, green is chlorophyll content, and blue is the photochemical reflectance index, indicating plant stress and highlighting differences in photosynthetic performance. Credit: Ran Wang.

Biologists get a new look at plant biodiversity and function with new imaging technology developed at the University of Alberta.

“Biodiversity and ecosystem function are both changing with human disturbance and climate change, and our research provides a new tool for assessing these changes and renewed hope for improved environmental monitoring,” explained John Gamon, professor in the Departments of Earth and Atmospheric Sciences and Biological Sciences and co-author in the study. “The information derived from this technology provides a practical way to address biodiversity and ecosystem function over large landscapes.”

The method uses an imaging spectrometer, similar to a conventional camera but with a thousand colours, mounted on a moving robotic cart to measure the spectra of light reflected from plants in visible, near-infrared, and short-wave infrared regions to measure differences in plant traits. Differences in reflected radiation allow scientists to not only see more than what the naked eye allows, but also to sample both the functional diversity and evolutionary history of individual plants in the environment.

This work is of particular importance because, as was noted in a previous study, 2050 is expected to see a loss in world economic productivity as a result of global warming threatening one-fifth of vascular plant species. The technological advance presented in this study gives researchers a new tool to monitor biodiversity, combat these threats, and raise awareness of biodiversity importance.

Traditional methods of observing plant biodiversity require extensive time, money, and biologists in the field with in-depth knowledge of plant species to identify them. However, using remote sensing to observe and assess biodiversity, allows researchers to not only observe and cover much larger areas–including areas that may be hard to reach–but to reveal and observe the differences in plant diversity and function more quickly.

“To build a strong argument for protecting and restoring biodiversity globally, it is important to quantify the services biodiversity provides for us, including nutrition, clean water and air, safety, health and enjoyment,” wrote Anna Schweiger, lead author of the study, in a blog post.

The technology was originally developed by John Gamon and Ran Wang, a former UAlberta PhD student as a part of his thesis work.

“Remote sensing–detecting the interaction of electromagnetic radiation and matter–is a fascinating place where physics meets plant physiology and ecology, and different plants display a range of different solutions to this, allowing us to detect plant diversity.

“Here at UAlberta, we developed new ways of measuring these interactions involving new imaging spectrometers and robotic carts, both of which were instrumental in this study. Taxonomic, physiological and evolutionary perspectives, spectral data analysis, image processing and a lot of powerful statistics, were combined in this work, a good example of team science.”