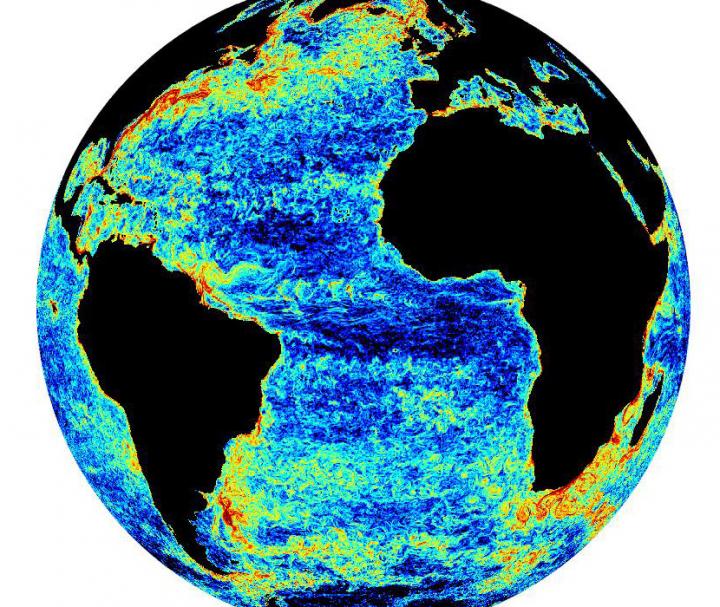 Brown University researchers have made a new insight into how Earth’s oceans dissipate turbulence, which could make for better ocean and climate models. The research shows that the bulk of dissipation (shown in red) happens in relatively sparse locales around the globe. Credit: Fox-Kemper Lab / Brown University

Brown University researchers have made a key insight into how high-resolution ocean models simulate the dissipation of turbulence in the global ocean. Their research, published in Physical Review Letters, could be helpful in developing new climate models that better capture ocean dynamics.

The study was focused on a form of turbulence known as mesoscale eddies, ocean swirls on the scale of tens to hundreds of kilometers across that last anywhere from a month to a year. These kinds of eddies can pinch off from strong boundary currents like the Gulf Stream, or form where water flows of different temperatures and densities come into contact.

“You can think of these as the weather of the ocean,” said Baylor Fox-Kemper, co-author of the study and an associate professor in Brown’s Department of Earth, Environmental and Planetary Sciences. “Like storms in the atmosphere, these eddies help to distribute energy, warmth, salinity and other things around the ocean. So understanding how they dissipate their energy gives us a more accurate picture of ocean circulation.”

The traditional theory for how small-scale turbulence dissipates energy states that as an eddy dies out, it transmits its energy to smaller and smaller scales. In other words, large eddies decay into smaller and smaller eddies until all the energy is dissipated. It’s a well-established theory that makes useful predictions that are widely used in fluid dynamics. The problem is that it doesn’t apply to mesoscale eddies.

“That theory only applies to eddies in three-dimensional systems,” Fox-Kemper said. “Mesoscale eddies are on the scale of hundreds of kilometers across, yet the ocean is only four kilometers deep, which makes them essentially two-dimensional. And we know that dissipation works differently in two dimensions than it does in three.”

Rather than breaking up into smaller and smaller eddies, Fox-Kemper says, two-dimensional eddies tend to merge into larger and larger ones.

“You can see it if you drag your finger very gently across a soap bubble,” he said. “You leave behind this swirly streak that gets bigger and bigger over time. Mesoscale eddies in the global ocean work the same way.”

This upscale energy transfer is not as well understood mathematically as the downscale dissipation. That’s what Fox-Kemper and Brodie Pearson, a research scientist at Brown, wanted to do with this study.

They used a high-resolution ocean model that has been shown to do a good job of matching direct satellite observations of the global ocean system. The model’s high resolution means it’s able to simulate eddies on the order of 100 kilometers across. Pearson and Fox-Kemper wanted to look in detail at how the model dealt with eddy dissipation in statistical terms.

“We ran five years of ocean circulation in the model, and we measured the damping of energy at every grid point to see what the statistics are,” Fox-Kemper said. They found that dissipation followed what’s known as a lognormal distribution — one in which one tail of the distribution dominates the average.

“There’s the old joke that if you have 10 regular people in a room and Bill Gates walks in, everybody gets a billion dollars richer on average — that’s a lognormal distribution,” Fox-Kemper said. “What it tells us in terms of turbulence is that 90 percent of the dissipation takes place in 10 percent of the ocean.”

Fox-Kemper noted that the downscale dissipation of 3-D eddies follows a lognormal distribution as well. So despite the inverse dynamics, “there’s an equivalent transformation that lets you predict lognormality in both 2-D and 3-D systems.”

The researchers say this new statistical insight will be helpful in developing coarser-grained ocean simulations that aren’t as computationally expensive as the one used in this study. Using this model, it took the researchers two months using 1,000 processors to simulate just five years of ocean circulation.

“If you want to simulate hundreds or thousands or years, or if you want something you can incorporate within a climate model that combines ocean and atmospheric dynamics, you need a coarser-grained model or it’s just computationally intractable,” Fox-Kemper said. “If we understand the statistics of how mesoscale eddies dissipate, we might be able to bake those into our coarser-grained models. In other words, we can capture the effects of mesoscale eddies without actually simulating them directly.”

The results could also provide a check on future high-resolution models.

“Knowing this makes us much more capable of figuring out if our models are doing the right thing and how to make them better,” Fox-Kemper said. “If a model isn’t producing this lognormality, then it’s probably doing something wrong.”