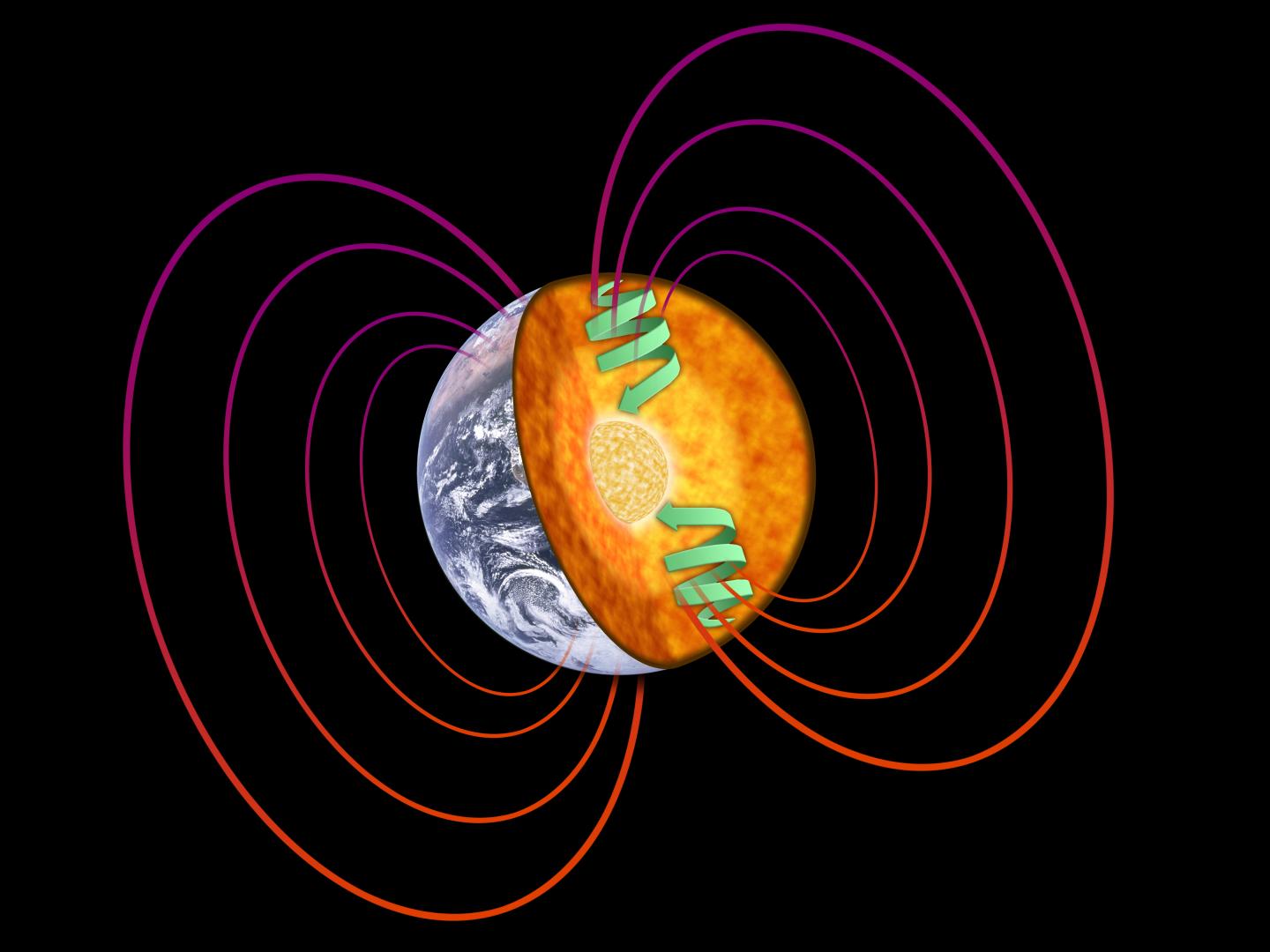 The earth creates its own magnetic field. Source: TU Wien

It only takes a simple compass to demonstrate that the earth has a magnetic field – but it is quite difficult to explain how exactly it is created. Without any doubt, our planet’s hot core, consisting mainly of iron, plays an important part. In combination with the earth’s rotation, it builds up a powerful “dynamo effect”, which creates a magnetic field.

But with iron alone, this effect cannot be explained. A team of researchers, led by Prof. Alessandro Toschi and Prof. Karsten Held (TU Wien) and Prof. Giorgio Sangiovanni (Würzburg University) has now published calculations in the journal “Nature Communications“, which show that the theory of the geodynamo has to be revised. As it turns out, it is crucial for the dynamo effect that the earth’s core contains up to 20% nickel – a metal, which under extreme conditions behaves quite differently from iron.

The earth’s core is about as big as the moon and as hot as the surface of the sun. There is a pressure of hundreds of gigapascals – that is comparable to the pressure which several railway locomotives would exert if they could be balanced on one square millimetre. “Under these extreme conditions, materials behave in a way which may be quite different from what we are used to”, says Karsten Held. “It is hardly possible to recreate these conditions in a lab, but with sophisticated computer simulations, we are able to calculate the behaviour of metals in the earth’s core on a quantum mechanical level.”

The heat of the earth’s core has to find a way to escape. Hot material rises up to the outer layers of the globe, creating convection currents. At the same time, the earth’s rotation leads to strong Coriolis forces. In combination these effects produce a complicated spiralling flow of hot material. “When electrical currents are created in such a system of flows, they can cause a magnetic field which in turn increases the electrical current and so forth – and finally the magnetic field becomes so strong that we can measure it on the surface of the earth”, says Alessandro Toschi.

Up until now, however, nobody could really explain how these convection currents emerge in the first place: iron is a very good heat conductor and at high pressure its thermal conductivity increases even more. “If the earth’s core consisted only of iron, the free electrons in the iron could handle the heat transport by themselves, without the need for any convection currents”, says Karsten Held. “Then, earth would not have a magnetic field at all.”

However, our planet’s core also contains almost 20% nickel. For a long time, this fact was not considered to be particularly important. But as it turns out, nickel plays a crucial role: “Under pressure, nickel behaves differently from iron”, says Alessandro Toschi. “At high pressure, the electrons in nickel tend to scatter much more than the electrons in iron. As a consequence, the thermal conductivity of nickel and, thus, the thermal conductivity of the earth’s core is much lower than it would be in a core consisting only of iron.” Due to the significant proportion of nickel, the heat of the high-temperature earth core cannot flow towards the planet’s surface by means of the motion of the electrons alone. As a result, convection currents have to emerge, which eventually build up the earth’s magnetic field.

To obtain these results, different metallic structures had to be analysed in large-scale computer simulations, and the behaviour of their electrons had to be calculated. The many-particle-calculations were performed by Andreas Hausoel (University of Würzburg), some of them on the Vienna Scientific Cluster (VSC). “Together with our colleagues from Würzburg, we did not only have a look at iron and nickel, but also at alloys of these two materials. We also had to take imperfections and irregularities into account, which made the computer simulations even more challenging”, says Karsten Held.

These advanced simulation methods are not only important to obtain a better understanding of the earth’s magnetic field, they also provide new insights into the electronic scattering processes in different materials. Alessandro Toschi is convinced: “Soon, these improvements of computational material algorithms will also lead to exciting forefront applications in chemistry, biology, industry and technology.”