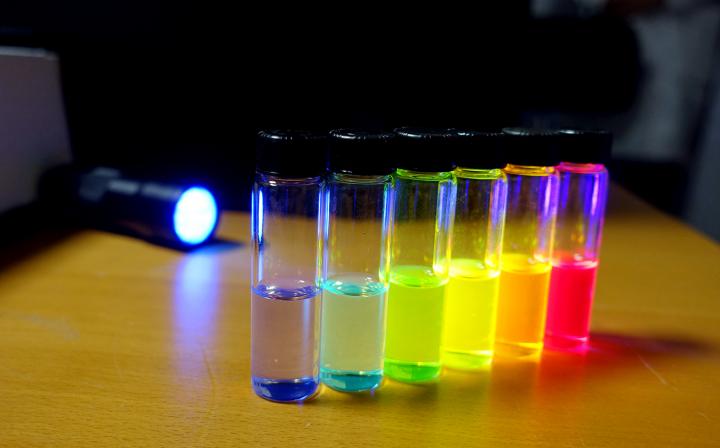 Nanoagents can be customized to be in different colors to facilitate tracking of more than one type of biomarker in the body. Source: NTU Singapore

Polymer nanoagents that can ‘light up’ tiny areas of diseased tissues that conventional methods fail to detect, have been created by a research team led by Nanyang Technological University, Singapore (NTU Singapore)

The nanoagents, known as ‘semiconductor polymer nanoparticles’ (SPNs), can store light energy from sources such as sunlight, near-infrared light or even light from mobile phones, and then emit long-lasting ‘afterglow light’.

The research team from NTU Singapore tailored highly sensitive SPNs to track down and lock on to diseased tissues in the body such as cancerous cells, sending back near-infrared signals which can be received and interpreted by standard imaging equipment.

Scientists and doctors now have more time to look at test results, as the nanoagents continue self-illuminating and their light intensity decreases by half only after six minutes.

Alternatively, if stored at -20 degree Celsius, the sample will maintain its results for a month, making it convenient for other diagnostic experts to interpret and review the results at a later time.

When tested in mice, the method provided results 20 to 120 times more sensitive than current optical imaging methods and 10 times faster in showing up diseased tissues.

Unlike conventional optical afterglow agents that are less bright and contain rare-earth heavy-metal ions that are toxic to biological cells, the new nanoagents are also organic, biodegradable and contain biologically benign ingredients that are non-toxic.

The research was published in the scientific journal Nature Biotechnology on 16 October. It could lead to future potential applications in image-guided surgery and in monitoring the effects of drugs that are seeking regulatory approval.

Associate Professor Pu Kanyi from NTU’s School of Chemical and Biomedical Engineering, who led the research team, said, “The new polymer nanoagents we have designed and built show a great deal of promise for clinical applications. They can detect diseased tissue much faster than current optical imaging techniques, and are much safer to use.

“We hope this may lead to technology that allows doctors to diagnose and treat patients much earlier than is possible at present. Potential use may be in image-guided surgery, where surgeons could use the technology to help them precisely remove diseased tissues in real-time, and in monitoring the effects of drugs that are seeking regulatory approval.”

The technology can also be used to evaluate the behaviour and therapeutic outcomes of drugs in the body, for example, whether drugs induce liver damage as a side effect.

Drug-induced liver damage is one of the most common reasons that the US Food and Drug Administration withholds drug approval.

Evaluation of potential damage in advance of regulatory approval is challenging because currently, studies performed in a controlled environment outside of a living organism often have low predictive power of how the drug reacts inside the organism.

Existing methods only track such activity at the tissue level whereas the new technology works at a molecular level, monitoring increased or decreased levels of biomarkers to determine how the drugs are working, before their therapeutic action is complete, providing much greater predictive power for drug development.

The study took two years and a patent is being filed for the technology. The research team now intends to conduct further trials in larger animal models.