NASA’s historic Parker Solar Probe mission will revolutionize our understanding of the Sun, where changing conditions can propagate out into the solar system, affecting Earth and other worlds. Parker Solar Probe will travel through the Sun’s atmosphere, closer to the surface than any spacecraft before it, facing brutal heat and radiation conditions — and ultimately providing humanity with the closest-ever observations of a star.

In order to unlock the mysteries of the Sun’s atmosphere, Parker Solar Probe will use Venus’ gravity during seven flybys over nearly seven years to gradually bring its orbit closer to the Sun. The spacecraft will fly through the Sun’s atmosphere as close as 3.8 million miles to our star’s surface, well within the orbit of Mercury and more than seven times closer than any spacecraft has come before. (Earth’s average distance to the Sun is 93 million miles.)

Flying into the outermost part of the Sun’s atmosphere, known as the corona, for the first time, Parker Solar Probe will employ a combination of in situ measurements and imaging to revolutionize our understanding of the corona and expand our knowledge of the origin and evolution of the solar wind. It will also make critical contributions to our ability to forecast changes in Earth’s space environment that affect life and technology on Earth.

Parker Solar Probe will perform its scientific investigations in a hazardous region of intense heat and solar radiation. The spacecraft will fly close enough to the Sun to watch the solar wind speed up from subsonic to supersonic, and it will fly though the birthplace of the highest-energy solar particles.

To perform these unprecedented investigations, the spacecraft and instruments will be protected from the Sun’s heat by a 4.5-inch-thick (11.43 cm) carbon-composite shield, which will need to withstand temperatures outside the spacecraft that reach nearly 2,500 F (1,377 C). 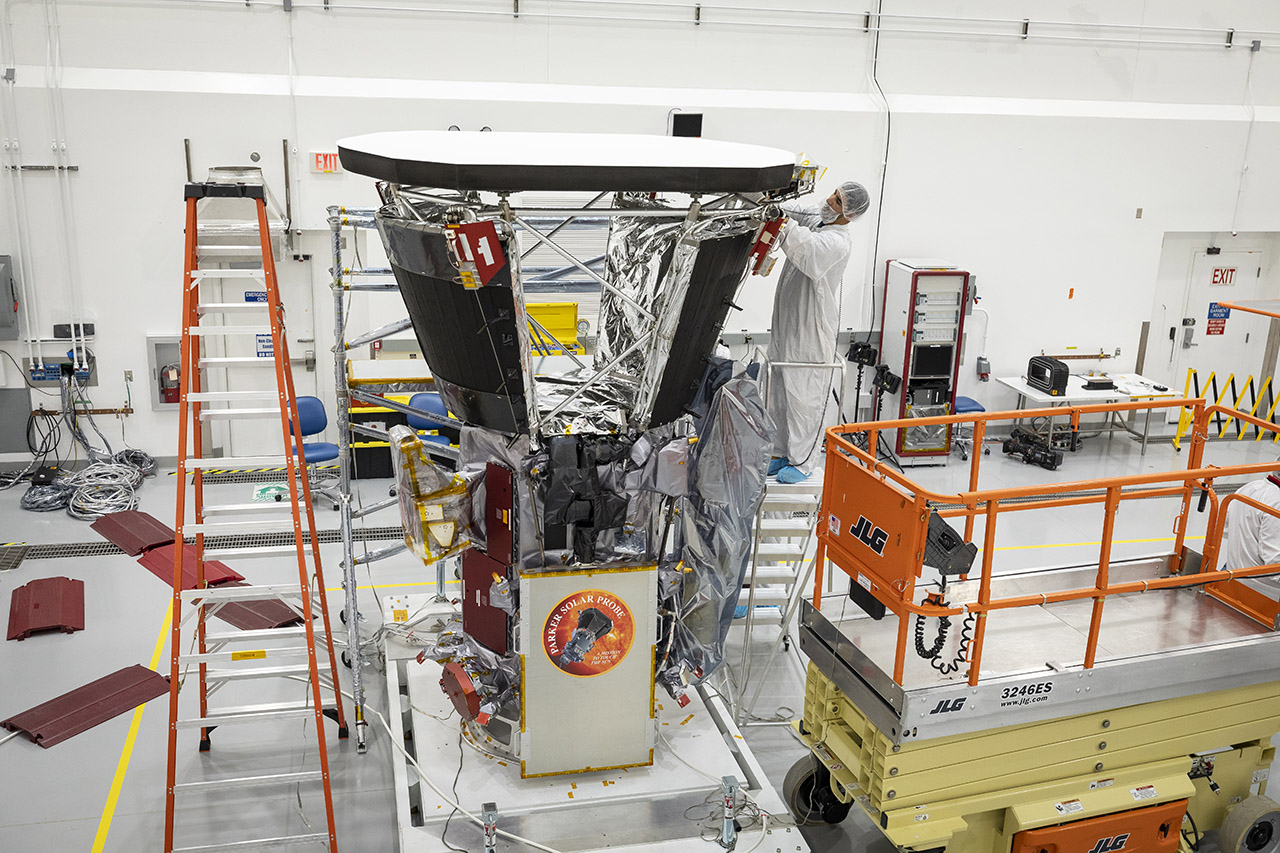 The primary science goals for the mission are to trace how energy and heat move through the solar corona and to explore what accelerates the solar wind as well as solar energetic particles. Scientists have sought these answers for more than 60 years, but the investigation requires sending a probe right through the 2,500 degrees Fahrenheit heat of the corona. Today, this is finally possible with cutting-edge thermal engineering advances that can protect the mission on its dangerous journey. Parker Solar Probe will carry four instrument suites designed to study magnetic fields, plasma and energetic particles, and image the solar wind.

Parker Solar Probe is part of NASA’s Living With a Star program to explore aspects of the Sun-Earth system that directly affect life and society. The Living With a Star flight program is managed by the agency’s Goddard Space Flight Center in Greenbelt, Md., for NASA’s Science Mission Directorate in Washington. The Johns Hopkins University Applied Physics Laboratory in Laurel, Md., manages the mission for NASA. APL is designing and building the spacecraft and will also operate it.