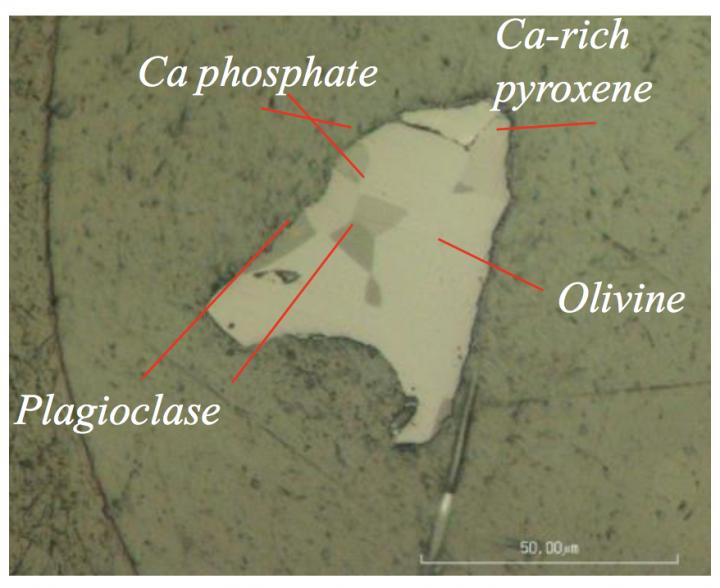 This is the cross section area of the particle collected from the asteroid Itokawa using Hayabusa spacecraft. Credit: Osaka University

Understanding the origin and time evolution of near-Earth asteroids (NEAs) is an issue of scientific interest and practical importance because they are potentially hazardous to the Earth. However, when and how these NEAs were formed and what they suffered during their lifetime remain enigmas.

Japanese scientists, including those from Osaka University, closely examined particles collected from the asteroid Itokawa by the spacecraft Hayabusa, finding that the parent body of Itokawa was formed about 4.6 billion years ago when the solar system was born and that it was destroyed by a collision with another asteroid about 1.5 billion years ago. Their research results were published in Scientific Reports.

Focusing on a few micrometers of phosphate minerals, which are rarely found in Itokawa particles, the scientists performed precise isotope analyses of uranium (U) and lead (Pb) in Itokawa particles of about 50 μm in diameter using Secondary Ion Mass Spectrometry (SIMS).

It has been reported that the mineralogy and geochemistry of the Itokawa particles resemble those of LL (LL stands for Low (total) iron, Low metal) chondrites, which frequently fall to the Earth.

The results of this study established constraints on the timescale of the first samples collected from the asteroid, providing concrete figures (absolute age) to the evolution of the NEAs whose orbits are well known. This will lead to the elucidation of the origins and histories of asteroids.