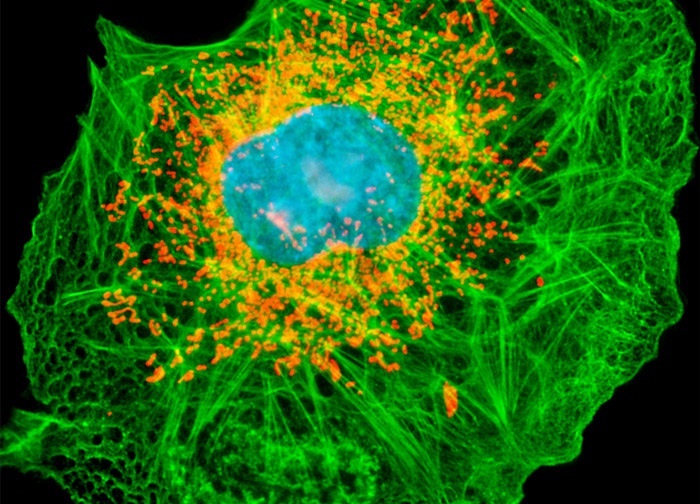 A culture of CHO-K1 cells labeled with a triplet of fluorophores, including MitoTracker Orange CMTM Ros, Oregon Green 488 and Hoechst 33258. Credit: Nikon MicroscopyU

Although few people realize it, modern medicine relies heavily on the ovarian cells of Chinese hamsters, not as a direct cure, but rather as a way to engineer custom protein-based therapeutics. These therapeutics can treat a wide range of ailments, including leukemia, hemophilia, hormone imbalance, psoriasis and cancer. A team working at the National Institute of Standards and Technology (NIST) has just released a new reference collection that could provide greater insight into these important cells, and enable better production of therapeutic proteins for medical purposes.

The reference collection released today, known as a peptide library, was created by NIST researchers. The data used in the library was gathered with help from other institutions, including Johns Hopkins University. It was put into a searchable format by postdoctoral researchers working in a cooperative program between NIST and the biopharmaceutical company MedImmune.

To understand the new tool’s relevance, one first has to know a little bit about the Chinese hamster ovarian cells, which are often simply referred to as CHO. Scientists have been using CHO in medical research for almost a hundred years, although most of the modern work on CHO cells began after it was discovered in the 1950s that they could multiply rapidly, and could also produce copious amounts of protein.

The development of recombinant DNA technologies in the 1980s caused CHO research and technology development to balloon dramatically. Such work now generates billions of dollars in annual revenue for pharmaceutical companies around the world through the production of biological drugs, those made with genetically engineered cells or other living things. These are different from conventional drugs, which are created through purely chemical processes from nonbiological materials.

Today, CHO cells are engineered using gene-editing tools to insert a gene that will enable the cells to produce a particular antibody or other valuable protein. After genetic engineering, the host cells are screened to isolate the ones that make the specific target protein. The growth conditions are optimized so that the cells will grow in large number and produce significant quantities of the therapeutic protein. In this way, the CHO host cells become microscopic medicine factories. Currently, most of the biologic drugs in the U.S. are made using CHO in this manner, including half of the therapeutic antibodies used to battle cancer.

In order to turn the manufactured antibodies into effective drugs, the antibodies must be isolated from the host CHO cells, separated from other impurities, and appropriately formulated for patient use. Manufacturers need to be confident that their products are not contaminated by other natural proteins that originate from the CHO cells, which acted as hosts during the antibody production process. These contaminants, which are often called ‘host cell proteins,’ are a significant safety concern because they can potentially cause an adverse immune reaction in patients or cause the product to not be sufficiently pure for regulatory approval.

The current method for checking for host cell protein contamination involves making an immunoassay, which is a kind of lengthy and complex test on the cells. Such assays involve biological processing, but do not reveal the biochemical nature or composition of the contaminants.

Those working in the field would like to use a mass spectrometer for testing instead. Mass spectrometers are powerful tools that can fully identify and quantify very small amounts of peptides, which are fragments of the larger proteins. These instruments are becoming more powerful and cost-effective with each passing year, making them an increasingly appealing choice. They also allow for greater precision, identifying the individual contaminant proteins with high confidence.

What’s been missing, however, is a resource tool to check whether detected peptides originate from host cell proteins.

To meet the need, NIST has created a new mass spectral library, which contains ‘signatures’ of individual biochemical components represented by peptides. These signatures are called mass spectra, which characterize individual peptides.

“It is a lot like the way they use fingerprint libraries in forensics,” said NIST chemist Stephen Stein, who directs the NIST Mass Spectrometry Data Center. By keeping a record of the peptides derived from various host cell proteins in CHO cell lines, CHO researchers can see if the spectra of peptides they identify in their work match any known proteins other than cells of the desired biological drug. Just as detectives who find a fingerprint at a crime scene run it through a police database to look for a match, CHO researchers can check the proteins they find against the peptide ‘signatures’ (or spectra) in this new library.

Quality data is especially key to the success of the peptide library. “Much like using a good fingerprint versus a smudged one, you would want to get as good and complete a picture of the protein as possible,” said Stein. “This library provides that more complete picture, which includes all previously measured data and provides a fast and direct readout of contaminants—unlike the immunological methods in common use.”

And whereas past assays could give widely varying results depending on the specific immunological materials used, mass spectrometry offers the potential for highly reproducible results, which will become even more precise as mass spectrometry instruments improve. Moreover, this method is direct and fast, minimizing the time needed to check for impurities while also increasing confidence in the results.

That information may prove especially valuable to those who wish to avoid causing allergenic problems in patients, which can happen when a host cell protein or other contaminant provokes an unintended rejection of medicine in a patient’s immune system. The patient’s own body will then try to fight the intended cure, and make the given therapy less effective or even detrimental to the patient.

“Using mass spectrometry will enable us to detect and identify biological impurities such as host cell proteins, even if they are present at very low levels,” said Mike Betenbaugh, a professor at Johns Hopkins University who serves as the director of the Advanced Mammalian Biomanufacturing Innovation Center(link is external).

As more information concerning contaminants is discovered and then added to the peptide library, the utility of the library will grow.

This new CHO tool is now available to the public and adds to a growing list of peptide libraries in the NIST Mass Spectrometry Data Center, which holds protein information on a wide variety of other organisms, including humans, chickens, mice, E. coli and zebrafish.