While quantum technologies have great long-term potential in computing applications, they are closer to practical use in sensing devices that will open new vistas in metrology, biology, neuroscience, and many other fields by enabling measurement of structures as small as individual photons, particles, and neurons.

New research from MIT’s interdisciplinary Quantum Engineering Group (QEG) is addressing one of the fundamental challenges facing these quantum sensor systems: removing environmental noise from the signal being measured.

The root of the problem, explains QEG doctoral student David Layden, is the extreme sensitivity of quantum sensors to their surrounding environment. These sensors typically start in a quantum superposition of two distinct states.

Minuscule external forces induce a phase variation between the two states that can be leveraged to measure physical quantities like temperature, motion, and electric and magnetic fields with unprecedented resolution.

But this same sensitivity means that the sensors are also picking up many extraneous environmental inputs in addition to the signal of interest.

Via a process called decoherence, this noise introduces uncertainty into the quantum sensors’ phase relationships and limits their ability to make precise measurements.

Several noise-reduction techniques have been developed to improve sensitivity by reducing decoherence. One common technique is dynamical decoupling — the introduction of a series of control pulses into the system, which allows the filtering of noise from signal based on frequency.

This technique, however, is incompatible with DC signals, which are often what sensors are seeking to measure.

Research into quantum computing has also, over the past couple of decades, produced error-correction schemes like the use of redundant quantum bits. While these are useful in information-processing applications, they have significant limitations for sensors.

“The standard stuff from the computing world is a little overzealous here,” says Layden. “It’s very good at correcting errors and pushing down noise, but it also tends to correct away the signal because it can’t differentiate the two.”

More recently, error-corrected quantum sensing (ECQS) techniques have been developed, in which a recovery operation effectively removes noise that affects the sensor from a different direction than the signal — along the x-axis when the signal is along the z-axis, for example.

These geometry-based techniques struggle, however, in the common situation where noise and signal affect the sensor from the same direction. 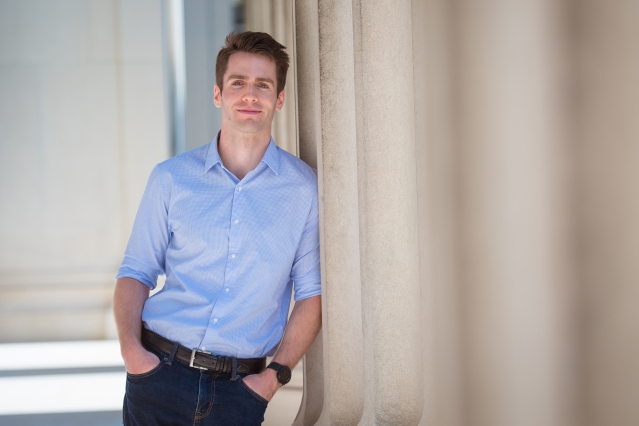 “In sensing applications, you instead want a very carefully shaped hole in your net to let through the specific signal you’re looking for.” says David Layden, PhD student in nuclear science and engineering. Image: Gretchen Ertl

In a recent paper published in the journal npj Quantum Information, Layden and QEG leader Paola Cappellaro, the Esther and Harold E. Edgerton Associate Professor of Nuclear Science and Engineering, unveil a novel way of applying established ECQS correction techniques to signal and noise that emanate from the same direction.

This approach allows frequency-independent filtering, because it exploits spatial rather than temporal noise correlations.

“The usual way of looking at error correction, for quantum computing, was to cast as wide a net as possible to correct as much as you could,” says Layden.

“In sensing applications, you instead want a very carefully shaped hole in your net to let through the specific signal you’re looking for. In effect, we’re adapting existing signal processing techniques for use in quantum devices. What’s surprising is how seamlessly these apparently unrelated ideas from quantum computing and signal processing fit together.”

Distinguishing signal from noise, the central requirement for noise-reduction techniques in quantum sensors, can be done in several ways. In addition to the geometric approach used in past ECQS techniques, researchers have exploited the fact that noise in many quantum devices is not completely unpredictable, but can instead be full of correlations. Dynamical decoupling, for instance, makes use of noise correlations at different times.

Analogously, the QEG researchers’ new ECQS scheme makes use of noise correlations at different positions in a quantum sensor. In this way, the new approach can tell signal from noise even in the common case where both are in the same direction, say, along the z-axis.

Layden and Cappellaro’s approach is complementary to existing DD and ECQS methods, which is helpful because noise sources vary widely in different sensing applications.

A diversity of filtering tools is desirable — and the new method could also open the door to quantum sensors that can correct for noise in all three spatial dimensions.

While development to date has been largely mathematical, experimental work is under way in the QEG’s laboratories, including evaluation of the noise challenges facing different types of quantum systems.

“We’ve been working on getting something similar up and running,” explains Layden.

Small-scale implementations have only recently become possible; while there are many theoretical ideas about how larger-scale quantum devices could operate, it’s likely that any practical near-term advances will come at intermediate scales, where the new QEG-developed techniques could prove especially useful.

Layden and Cappellaro are also working with collaborators at Yale University to advance the theoretical side of their project; funding is provided by the U.S. Army Research Office, the National Science Foundation, and the Natural Sciences and Engineering Research Council of Canada.

“We’re not quite at the stage of getting experimental results yet, but we’re building hardware and doing simulations, and the interplay of going back and forth really shapes not just this project but several related ones as well,” adds Layden.