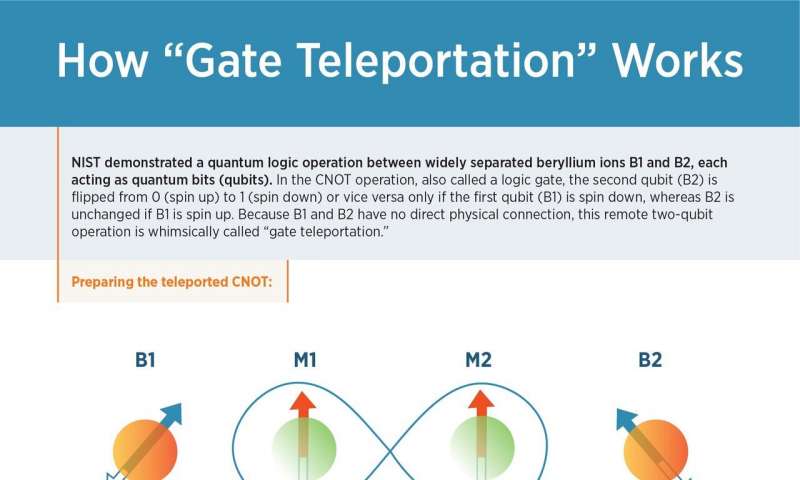 Physicists at the National Institute of Standards and Technology (NIST) have teleported a computer circuit instruction known as a quantum logic operation between two separated ions (electrically charged atoms), showcasing how quantum computer programs could carry out tasks in future large-scale quantum networks.

Quantum teleportation transfers data from one quantum system (such as an ion) to another (such as a second ion), even if the two are completely isolated from each other, like two books in the basements of separate buildings. In this real-life form of teleportation, only quantum information, not matter, is transported, as opposed to the Star Trek version of “beaming” entire human beings from, say, a spaceship to a planet.

Teleportation of quantum data has been demonstrated previously with ions and a variety of other quantum systems. But the new work is the first to teleport a complete quantum logic operation using ions, a leading candidate for the architecture of future quantum computers. The experiments are described in the May 31 issue of Science.

“We verified that our logic operation works on all input states of two quantum bits with 85 to 87% probability—far from perfect, but it is a start,” NIST physicist Dietrich Leibfried said.

A full-scale quantum computer, if one can be built, could solve certain problems that are currently intractable. NIST has contributed to global research efforts to harness quantum behavior for practical technologies, including efforts to build quantum computers.

For quantum computers to perform as hoped, they will probably need millions of quantum bits, or “qubits,” as well as ways to conduct operations between qubits distributed across large-scale machines and networks. Teleportation of logic operations is one way do that without direct quantum mechanical connections (physical connections for the exchange of classical information will still be needed).

The NIST team teleported a quantum controlled-NOT (CNOT) logic operation, or logic gate, between two beryllium ion qubits located more than 340 micrometers (millionths of a meter) apart in separate zones of an ion trap, a distance that rules out any substantial direct interaction. A CNOT operation flips the second qubit from 0 to 1, or vice versa, only if the first qubit is 1; nothing happens if the first qubit is 0. In typical quantum fashion, both qubits can be in “superpositions” in which they have values of both 1 and 0 at the same time.

The NIST teleportation process relies on entanglement, which links the quantum properties of particles even when they are separated. A “messenger” pair of entangled magnesium ions is used to transfer information between the beryllium ions (see infographic).

The NIST team found that its teleported CNOT process entangled the two magnesium ions—a crucial early step—with a 95% success rate, while the full logic operation succeeded 85% to 87% of the time.

“Gate teleportation allows us to perform a quantum logic gate between two ions that are spatially separated and may have never interacted before,” Leibfried said. “The trick is that they each have one ion of another entangled pair by their side, and this entanglement resource, distributed ahead of the gate, allows us to do a quantum trick that has no classical counterpart.”

“The entangled messenger pairs could be produced in a dedicated part of the computer and shipped separately to qubits that need to be connected with a logic gate but are in remote locations,” Leibfried added.

The NIST work also integrated into a single experiment, for the first time, several operations that will be essential for building large-scale quantum computers based on ions, including control of different types of ions, ion transport, and entangling operations on selected subsets of the system.

To verify that they performed a CNOT gate, the researchers prepared the first qubit in 16 different combinations of input states and then measured the outputs on the second qubit. This produced a generalized quantum “truth table” showing the process worked.

In addition to generating a truth table, the researchers checked the consistency of the data over extended run times to help identify error sources in the experimental setup. This technique is expected to be an important tool in characterizing quantum information processes in future experiments.