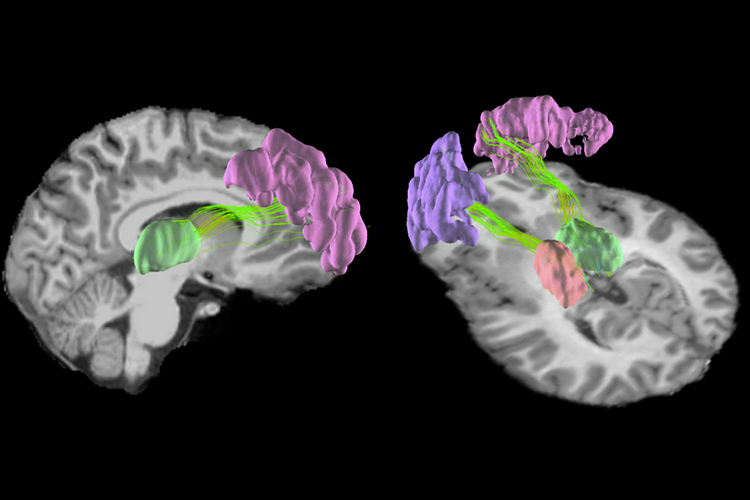 Magnetic resonance imaging (MRI) brain scans have revealed that playing a single season of high school football can cause microscopic changes in the grey matter in young players’ brains. These changes are located in the front and rear of the brain, where impacts are most likely to occur, as well as deep inside the brain. (Image by Nan-Jie Gong and Chunlei Liu, UC Berkeley)

A single season of high school football may be enough to cause microscopic changes in the structure of the brain, according to a new study by researchers at the University of California, Berkeley, Duke University and the University of North Carolina at Chapel Hill.

The researchers used a new type of magnetic resonance imaging (MRI) to take brain scans of 16 high school players, ages 15 to 17, before and after a season of football. They found significant changes in the structure of the grey matter in the front and rear of the brain, where impacts are most likely to occur, as well as changes to structures deep inside the brain. All participants wore helmets, and none received head impacts severe enough to constitute a concussion.

The study, which is the cover story of the November issue of Neurobiology of Disease, is one of the first to look at how impact sports affect the brains of children at this critical age. This study was made available online in July 2018 ahead of final publication in print this month.

“It is becoming pretty clear that repetitive impacts to the head, even over a short period of time, can cause changes in the brain,” said study senior author Chunlei Liu, a professor of electrical engineering and computer sciences and a member of the Helen Wills Neuroscience Institute at UC Berkeley. “This is the period when the brain is still developing, when it is not mature yet, so there are many critical biological processes going on, and it is unknown how these changes that we observe can affect how the brain matures and develops.”

One bonk to the head may be nothing to sweat over. But mounting evidence shows that repeated blows to the cranium – such as those racked up while playing sports like hockey or football, or through blast injuries in military combat – may lead to long-term cognitive decline and increased risk of neurological disorders, even when the blows do not cause concussion.

Over the past decade, researchers have found that an alarming number of retired soldiers and college and professional football players show signs of a newly identified neurodegenerative disease called chronic traumatic encephalopathy (CTE), which is characterized by a buildup of pathogenic tau protein in the brain. Though still not well understood, CTE is believed to cause mood disorders, cognitive decline and eventually motor impairment as a patient ages. Definitive diagnosis of CTE can only be made by examining the brain for tau protein during an autopsy.

These findings have raised concern over whether repeated hits to the head can cause brain damage in youth or high school players, and whether it is possible to detect these changes at an early age.

“There is a lot of emerging evidence that just playing impact sports actually changes the brain, and you can see these changes at the molecular level in the accumulations of different pathogenic proteins associated with neurodegenerative diseases like Parkinson’s and dementia,” Liu said. “We wanted to know when this actually happens — how early does this occur?”

A matter of grey and white

The brain is built of white matter, long neural wires that pass messages back and forth between different brain regions, and grey matter, tight nets of neurons that give the brain its characteristic wrinkles. Recent MRI studies have shown that playing a season or two of high school football can weaken white matter, which is mostly found nestled in the interior of the brain. Liu and his team wanted to know if repetitive blows to the head could also affect the brain’s gray matter.

“Grey matter in the cortex area is located on the outside of the brain, so we would expect this area to be more directly connected to the impact itself,” Liu said.

The researchers used a new type of MRI called diffusion kurtosis imaging to examine the intricate neural tangles that make up gray matter. They found that the organization of the gray matter in players’ brains changed after a season of football, and these changes correlated with the number and position of head impacts measured by accelerometers mounted inside players’ helmets.

The changes were concentrated in the front and rear of the cerebral cortex, which is responsible for higher-order functions like memory, attention and cognition, and in the centrally located thalamus and putamen, which relay sensory information and coordinate movement.

“Although our study did not look into the consequences of the observed changes, there is emerging evidence suggesting that such changes would be harmful over the long term,” Liu said.

Tests revealed that students’ cognitive function did not change over the course of the season, and it is yet unclear whether these changes in the brain are permanent, the researchers say.

“The brain microstructure of younger players is still rapidly developing, and that may counteract the alterations caused by repetitive head impacts,” said first author Nan-Ji Gong, a postdoctoral researcher in the Department of Electrical Engineering and Computer Sciences at UC Berkeley.

However, the researchers still urge caution – and frequent cognitive and brain monitoring – for youth and high schoolers engaged in impact sports.

“I think it would be reasonable to debate at what age it would be most critical for the brain to endure these sorts of consequences, especially given the popularity of youth football and other sports that cause impact to the brain,” Liu said.