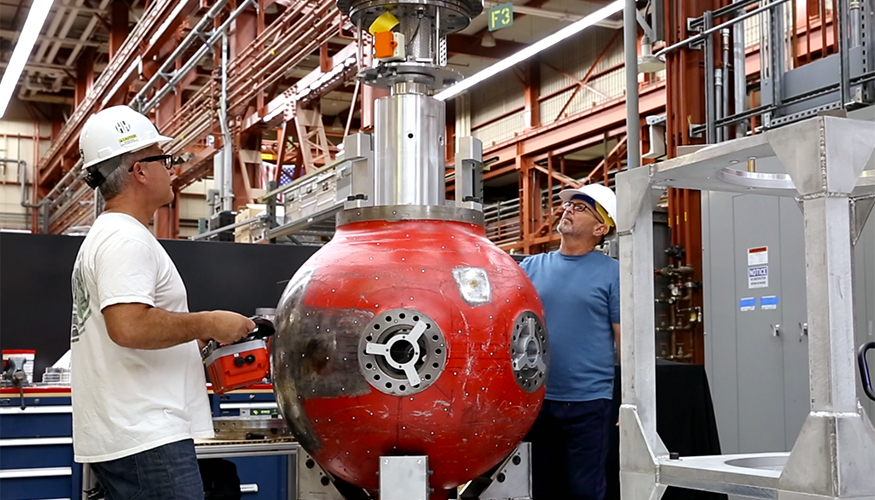 Senior mechanical Technician Rich Moore (left) and Mechanical Designer Kevin Morris lower an alignment mechanism into a vessel that confined an experiment with conventional explosives and mock parts that took place Monday. It was the fourth of five preparatory experiments designed to confirm safety features leading up to a subcritical (unable to sustain the nuclear fission chain reaction) experiment with plutonium.

Conducting an experiment that combines high explosives with plutonium — a special nuclear material used in nuclear weapons — is no trivial matter. Not only do researchers need to ensure the plutonium remains “subcritical” to avoid a nuclear explosion, they must be absolutely certain that these materials are confined in a worst-case scenario. On top of that, they have to be sure they can collect data they need to continue to ensure the safety, security and effectiveness of the U.S. nuclear stockpile.

A team of researchers at Lawrence Livermore National Laboratory (LLNL) recently passed the halfway point in a multi-year journey toward such a subcritical experiment (an experiment on plutonium that does not result in a nuclear explosion) when they successfully conducted the fourth, preparatory “hydrodynamic” experiment (an experiment using mock components made of non-nuclear materials) in the “Sierra Nevada” series. The researchers will conduct one more preparatory experiment leading up to a final subcritical experiment that will allow them to collect important data about how a plutonium bomb core implodes. The series is a tri-lab effort between LLNL, the U.K.’s Atomic Weapons Establishment (AWE(link is external)) and Los Alamos National Laboratory (LANL(link is external)). The shared goal: Advance the safety of respective nuclear stockpiles.

LLNL is responsible for assessing U.S. nuclear devices every year without the use of additional nuclear testing to ensure the warheads will always work when intended, but never work when unintended. To meet that challenge, researchers rely on computer simulations underpinned by data from past nuclear tests and modern experiments. The Sierra Nevada series of experiments will provide increased confidence in these annual assessments, making sure the safety of nuclear systems remains robust and enabling researchers to enhance safety, where possible, as they work to extend the life of the aging stockpile.

“We go through a lot of rigor to execute these experiments safely,” said Reed Patterson, the LLNL experimental physicist leading the series. “The first five experiments (without plutonium) are all about making sure all the experimental safety features will function properly. The sixth experiment (subcritical plutonium) will provide data we need to advance the safety of the stockpile.”

One of the novel, unintuitive features being used to make sure the Sierra Nevada experiments are conducted safely is the use of glass panels to protect the interior of steel confinement vessels from blast and debris. When a piece of debris hits a glass panel, the glass constricts at a molecular level around that impact point as it shatters. This unique material property makes glass tremendously effective at absorbing energy, better than metals of a much greater density.

With the remaining experiments in the series, glass panels will surround the experimental components within a one-inch-thick steel confinement vessel. The vessel itself is “overdesigned” to the point that it can confine the explosion without issue, but the researchers still want to protect its interior to further mitigate risk and to enable the vessel to be reused in future tests with non-nuclear materials.

After each hydrodynamic experiment, the researchers conduct an ultrasonic, nondestructive evaluation of the vessel to determine if it has sustained any non-visible or subsurface damage. If it checks out, it’s cleared for reuse with future experiments that do not contain special nuclear materials. On the other hand, researchers will use a brand-new vessel of the same design and same manufacturing lot for the final subcritical experiment with plutonium. That vessel will go through the same rigorous ultrasonic evaluation conducted after the preparatory tests to certify that it’s fit for use.

The most recent Sierra Nevada experiment did not include special nuclear material, but it did provide physics data relevant to advancing stockpile safety. Leading up to the experiment, LLNL researchers conducted a series of supercomputer simulations using LLNL’s stockpile safety models to predict what would happen as the mock materials reacted to a high-explosive blast. The experiment captured radiographic images of the implosion as it progressed, which were later analyzed against the simulations. In this analysis, two things stood out: The implosion is tremendously complex, and the experimental results remarkably mirror the simulations.

“What makes this series special is that it’s focused on advancing the safety of the deterrent, rather than its performance,” said Barbara Kornblum, one of the LLNL physicists designing the experimental series. “It will help fill gaps in the data we use to make sure the aging stockpile remains safe.”

The U.S. stopped underground nuclear testing in 1992. In the post-testing era, the scientists at LLNL have leveraged computer models as their virtual testing ground. But for this approach to science-based stockpile stewardship to work, the simulated results must be validated against real experimental data – both from past underground nuclear tests and modern experiments.

It is typical for experimental data to be shared among collaborators. In this case, AWE, LANL and LLNL will equally benefit from the data. The computer models used to simulate results, on the other hand, are treated as proprietary by the laboratories. In a sense, the codes are the secret sauce of each laboratory, providing an important mechanism to facilitate independent assessments and allow in-depth peer review to take place.

LLNL researchers are responsible for assessing half of the existing stockpile. Its sister lab, LANL, is responsible for the other half. The independent assessments are peer reviewed by the other lab and presented to the directors of LLNL and LANL to be synthesized into an annual letter to the president, Congress and the Department of Defense assessing, with quantifiable confidence, that the U.S. nuclear stockpile is safe (won’t go off by accident), secure (can’t be used by adversaries or rogue insiders) and effective (will work as designed, if ever needed).

With a decades-old stockpile that is well beyond its intended design life, and without recourse to a nuclear test to verify that the devices still work, this key responsibility of the National Nuclear Security Administration (NNSA(link is external)) laboratories is a tremendous challenge. But NNSA labs like LLNL and LANL have been able to meet this responsibility by partnering on focused experiments to validate complex computer models that inform the judgment of researchers and ultimately the laboratory directors, playing a key role in developing the annual letter to the president regarding the current state of the stockpile.

Each of the Sierra Nevada collaborators is providing significant support for the series. AWE provided a number of parts for the experiments, and they hosted the first and third hydrodynamic tests in the series. LANL hosted the second test and has worked closely with the LLNL and AWE teams in support of all three experiments. The most recent hydrodynamic experiment was conducted at LLNL’s Contained Firing Facility in a vessel designed by AWE and on loan from LANL. Researchers plan to use the same vessel for the fifth experiment at the Nevada National Security Site (NNSS(link is external)) — formerly the Nevada Test Site — before being replaced by a new vessel for the penultimate subcritical experiment. The final two tests will by supported by National Security Technologies, the contractor operating NNSS