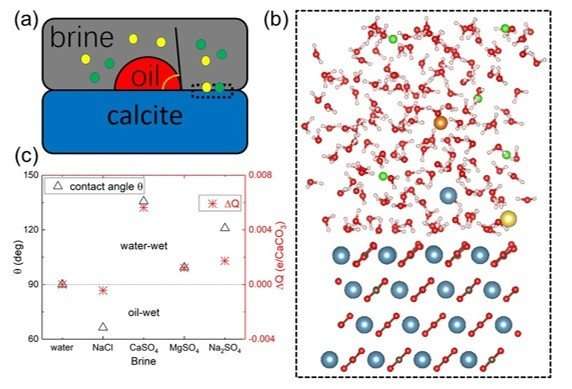 Clockwise from top left: a schematic diagram of the calcite/brine/oil system, a simulation supercell (color scheme: Ca-indigo, C-brown, O-red, H-white) with ions in brine shown schematically, and the oil-in-water contact angle assuming an initial mixed-wet state and difference (relative to calcite-water) in the effective charge of the surface. Credit: Sokrates Pantelides

With their current approach, energy companies can extract about 35 percent of the oil in each well. Every 1 percent above that, compounded across thousands of wells, can mean billions of dollars in additional revenue for the companies and supply for consumers.

Extra oil can be pushed out of wells by forced water – often inexpensive seawater – but scientists doing experiments in the lab found that sodium in water impedes its ability to push oil out, while other trace elements help. Scientists experiment with various combinations of calcium, magnesium, sulfates and other additives, or “wettability modifiers,” in the laboratory first, using the same calcite as is present in the well. The goal is to determine which lead to the most oil recovery from the rock.

They found that calcium, magnesium and sulfates settle farther from the calcite surface, rendering it more water-wet by modifying the effective charge on the surface, enhancing oil recovery. Their predictions have been backed by experiments carried out by their collaborators at Khalifa University in Abu Dhabi: Saeed Alhassan, associate professor of chemical engineering and director of the Gas Research Center, and his research associate, Omar Wani.

“Now, scientists in the lab will have a procedure by which they can make intelligent decisions on experiments instead of just trying different things,” said Pantelides, University Distinguished Professor of Physics and Engineering, William A. & Nancy F. McMinn Professor of Physics, and professor of electrical engineering. “The discoveries also set the stage for future work that can optimize choices for candidate ions.”

The team’s paper, “Wettability alteration and enhanced oil recovery induced by proximal adsorption of Na+, Cl–, Ca2+, Mg2+, and SO2-4 ions on calcite,” appears today in the journal Physical Review Applied. It builds on Pantelides’ previous work on wettability, released earlier this year.

His co-investigators in Abu Dhabi said the work will have a significant impact on the oil industry.

“We are excited to shed light on combining molecular simulations and experimentation in the field of enhanced oil recovery to allow for more concrete conclusions on the main phenomenon governing the process,” Alhassan said. “This work showcases a classic approach in materials science and implements it in the oil and gas industry: the combination of modeling and experiment to provide understanding and solutions to underlying problems.”