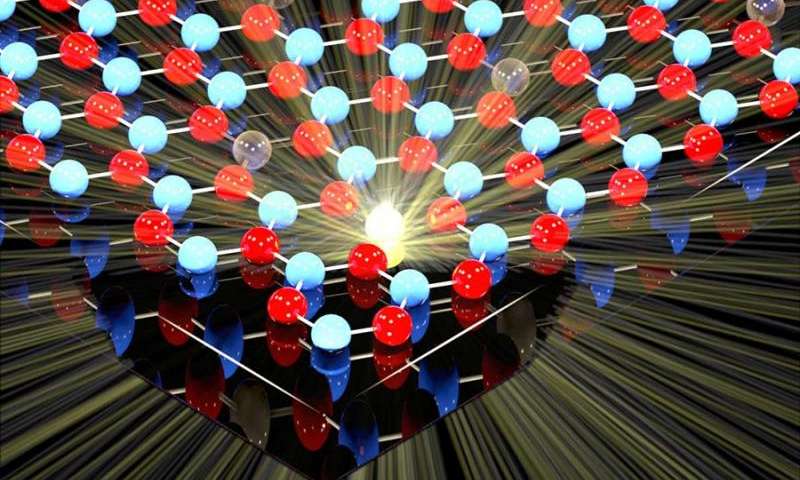 The race towards quantum computing is heating up. Faster, brighter, more exacting – these are all terms that could be applied as much to the actual science as to the research effort going on in labs around the globe.

Quantum technologies are poised to provide exponentially stronger computational power and secured communications. But the bar is high – advances are hard won and competition is intense.

At the forefront of the candidates to implement such technologies is the field of quantum photonics, particularly light sources that emit photons one at a time to be used as carriers of information.

Quantum technologies require the quantum analogue to the classical “information bit” that is used to encode zeros and ones, and a means to transfer the information. Photons can do both. Single photon sources, such as point defects in solids, can be used as quantum bits. Photons generated by the defects can then carry the information from node to node, in a similar way to conventional integrated circuits. The challenge is: how to find and engineer those sources.

Associate Professors Igor Aharonovich and Milos Toth, from the Faculty of Science at UTS, are working on engineering new ultra-bright and super-efficient sources from emerging 2D platforms.

Aharonovich and Toth, writing the cover story for the latest issue of Nature Photonics with their long-time collaborator Professor Dirk Englund of MIT, have laid out a road map showing what needs to be done to realise quantum emitters that are good enough for real-world technologies.

The scientists have drawn on their own extensive research as well as the achievements of hundreds of other scientists around the world to summarise the state of play with solid-state single-photon sources.

“Photonic technologies are becoming increasingly prevalent in our daily lives. After decades of rapid advances, light sources – especially lasers and light-emitting diodes (LEDs) – have become high-performance, yet low-cost and reliable components, driving the internet and lighting cities,” they write.

The next frontier of research is the development of non-classical light sources: sources that produce streams of photons with controllable quantum relationships.

“The required toolkit is in place, primarily because a vast library of single-photon emitters has already been established. It is therefore the right time to dedicate resources to scalability, optimisation and applicability of these emitters to real devices.”

In a nutshell, the noteworthy developments are: