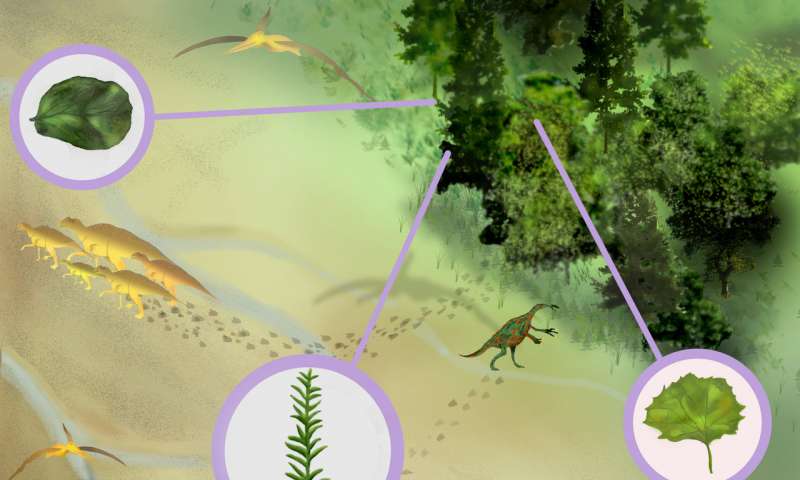 A newly discovered fossil suggests that large, flowering trees grew in North America by the Turonian age, showing that these large trees were part of the forest canopies there nearly 15 million years earlier than previously thought. Researchers from Adelphi University and the Burpee Museum of Natural History found the fossil in the Mancos Shale Formation in Utah, in ancient delta deposits formed during a poorly understood interval in the North American fossil record.

“These discoveries add much more detail to our picture of the landscape during the Turonian period than we had previously,” says Michael D’Emic, assistant professor of biology at Adelphi, who organized the study. “Since Darwin, the evolution of flowering plants has been a topic of debate for paleontologists because of their cryptic fossil record. Our paper shows that even today it is possible for a single fossil specimen to change a lot about what we know about the early evolution of the group.

“Understanding the past is the key to managing the future,” D’Emic added. “Learning how environments evolved and changed in the past teaches us how to better prepare for future environmental change.”

Aside from the large petrified log, the team reports fossilized foliage from ferns, conifers and angiosperms, which confirm that there was forest or woodland vegetation 90 million years ago in the area, covering a large delta extending into the sea. The team also reports the first turtle and crocodile remains from this geologic layer, as well as part of the pelvis of a duck-billed dinosaur; previously, the only known vertebrate remains found were shark teeth, two short dinosaur trackways, and a fragmentary pterosaur.

“Until now most of what we knew about plants from the Ferron Sandstone came from fossil pollen and spores,” says Nathan Jud, co-author and assistant professor of biology at William Jewell College. “The discovery of fossil wood and leaves allows us to develop a more complete picture of the flora.”

The paper, titled “A new fossil assemblage shows that large angiosperm trees grew in North America by the Turonian (Late Cretaceous),” will be published in Science Advances online on Wednesday, September 26, 2018.