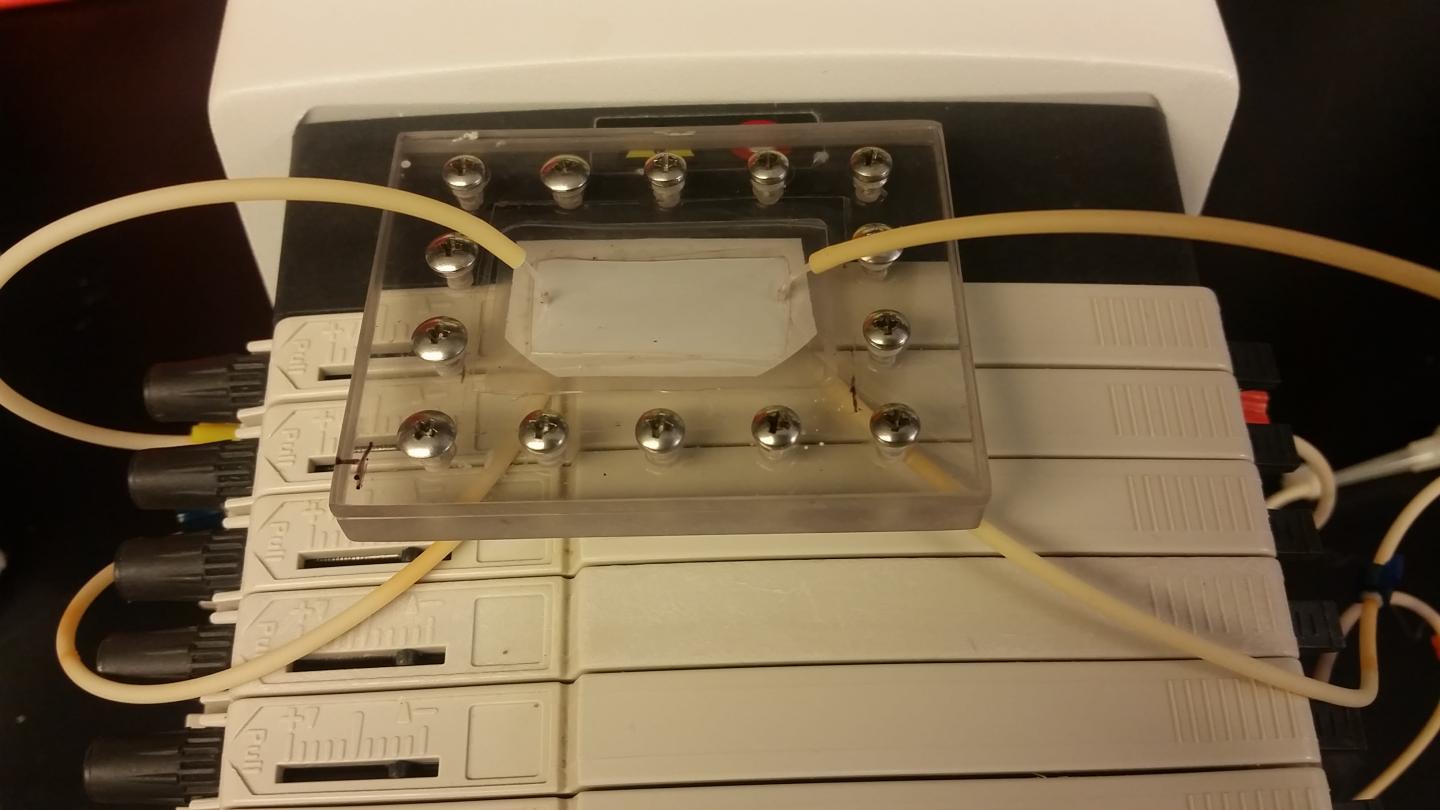 This reusable, multi-layered and microfluidic device incorporates a porous growth substrate, with a physiological fluid flow, and the passive filtration of the capillaries around the end of a kidney, called the glomerulus, where waste is filtered from blood. Source: Gretchen Mahler

Instead of running tests on live kidneys, researchers at Binghamton, University State University of New York have developed a model kidney for working out the kinks in medicines and treatments.

Developed by Assistant Professor Gretchen Mahler and Binghamton biomedical engineering alumna Courtney Sakolish PhD ’16, the reusable, multi-layered and microfluidic device incorporates a porous growth substrate, with a physiological fluid flow, and the passive filtration of the capillaries around the end of a kidney, called the glomerulus, where waste is filtered from blood.

“This is a unique platform to study interactions between drugs and cells or tissues, specifically in the kidney, where current models were lacking,” said Sakolish. “These platforms will, hopefully, in the future, be used as an animal alternative during pre-clinical testing to more accurately direct these studies toward successful results in humans.”‘

“This is tissue engineering, but not for the purpose or replacing an organ or tissue in a person,” said Mahler. “The idea is that we can recreate the major organ functions in a simplified way for use as a drug screening tool. Finding new drugs is very hard, expensive and inefficient. We hope that by using human cells in a physiological environment we can help to direct resources toward the most promising new drug candidates and determine that other new drug candidates will fail, faster.”

Results suggest that cells grown in the device exhibit more natural behaviors than when grown in traditional culturing methods, and the filtration by the glomerulus is necessary for healthy cell function.

“We found that the more complex, dynamic culturing conditions (like those used in this project) are necessary to accurately predict renal drug toxicity in human systems,” said Sakolish. “When we compared physiological renal function and drug toxicity in traditional static culturing against our new model, we found significant differences in the ways that cells behaved. In our platform, cells looked and acted like those that you would find in the body, showing more sensitive responses to drugs than traditional static culturing.”

Mahler said that while others have developed microfluidic models of the proximal tubule before, this is the first to offer glomerular filtration.

“This type of device uses human cells in a dynamic, more physiologic environment, potentially making it better at predicting the body’s response to drugs than animals (animal effectiveness studies often don’t translate to humans) or static cell cultures, which are the most commonly used preclinical screening tools,” said Mahler.