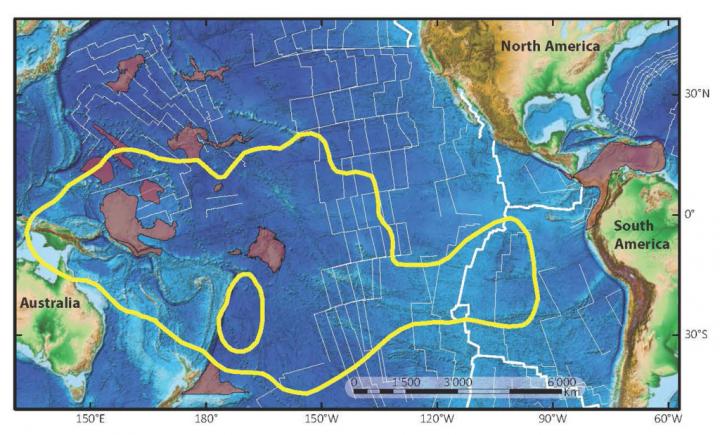 A paper published in Nature Communications by Virginia Tech researchers confirms a major feature in the formation of large igneous provinces — massive worldwide volcanic eruptions that created incredibly high volumes of lava and triggered environmental catastrophes and mass extinctions from 170 to 90 million years ago.

“We confirmed an ongoing working hypothesis that in order to form these massive eruptions there has to be an input from deep mantle upwellings, as well as interaction with a shallow structure, like a mid-ocean ridge, to allow the outpouring of large volumes of lava,” said Madrigal.

“Our work also suggests that the deep upwellings of hot mantle material forming these large igneous provinces occurred in pulses of 10 million to 20 million years,” she added. “This hint of cyclicity is an interesting result suggesting that there may be deep mantle instabilities occurring every so often that we still don’t fully understand and that could potentially be related with core-mantle interactions.”

The hypothesis had been shown only in numerical and dynamical models until Gazel and Madrigal independently evaluated the geodynamical evidence with geochemical and petrological models they produced to find robust correlations indicating that this interaction was key in forming large igneous provinces. Large igneous provinces are massive formations of igneous rocks made of volcanic and intrusive materials, all formed from rapid production of magma. Large igneous provinces are scattered around the world in ocean basins bordering Siberia, Africa, India, and on the east coasts of North and South America. In this study, Gazel and Madrigal focused their attention on the Pacific Ocean locations.

“The generation of these igneous provinces correlates with some of the most devastating events in our planet’s history,” said Gazel, who spearheaded the study. “The geological record of these events contain crucial information to understand the inner dynamics of the Earth’s mantle. But also, every time they happened, they completely changed life on the planet.”

Gazel and Madrigal studied the geochemical composition and timing of the large igneous provinces that occurred in the Pacific Plate during the Mesozoic Period, in a time span of between 170 to 90 million years ago. They collected samples of underwater lava flows now exposed along the Pacific coast of Costa Rica. These lavas were formed in the Pacific and were brought to the surface by tectonic processes, said Gazel.

“The field work was very exciting because one can see these underwater formations that are now exposed on the surface” said Gazel, adding that their collection efforts included boat trips, swimming to outcrops, and hiking along the coast.

And Gazel knew the area well. He spent summers in the Nicoya Peninsula of Costa Rica. “These rocks and I go back a long way,” he said. “I used to spend the summers playing and getting in trouble on these pillow basalts during my childhood.”

In collaboration with Kennet Flores, assistant professor at Brooklyn College in New York, the team produced a series of kinematic models to calculate the Pacific’s paleotectonic configuration during the Cretaceous Period.

The study also included isotopic and age-dating data collected in collaboration with researchers Michael Bizimis and Brian Jicah from the University of South Carolina and the WiscAr Geochronology Laboratory at the University of Wisconsin-Madison, respectively.

The study findings suggest a relationship between eruption of these provinces and the location of paleo mid-ocean ridges, where normal oceanic crust forms in a steady-state fashion, and the position of the edges of the Pacific Large Low-Shear Velocity Province, a thermochemical anomaly roughly 1,860 miles wide between eastern Australia and the west coast of South America, located deep in the Earth at the mantle-core boundary.

Added Gazel, “This is an important breakthrough, as we can better explain why these events were so big. To put things into perspective, the pulse that happened 120 million years ago that formed the Ontong-Java, Manihiki, and Hukurangi large igneous provinces covered an area equivalent to about 40 percent of the continental U.S. in a very short time.”

Most of these magmatic provinces formed at the same time as an event known as the Cretaceous Normal Superchron, roughly 120 to 80 million years ago, when for millions of years the Earth’s core did not change its polarity, which was most likely caused by fluctuations of core-mantle heat flux, said Gazel.

He said there were many other extinction-level events throughout history, such as one nearly 300 million years ago that almost wiped out all life on the planet, from the eruption of the Siberian Traps, another large-igneous province.

He added, “Understanding these processes is not only important to decode the deep puzzles of Earth but also to better understand the fragility and resilience of life on our planet.”