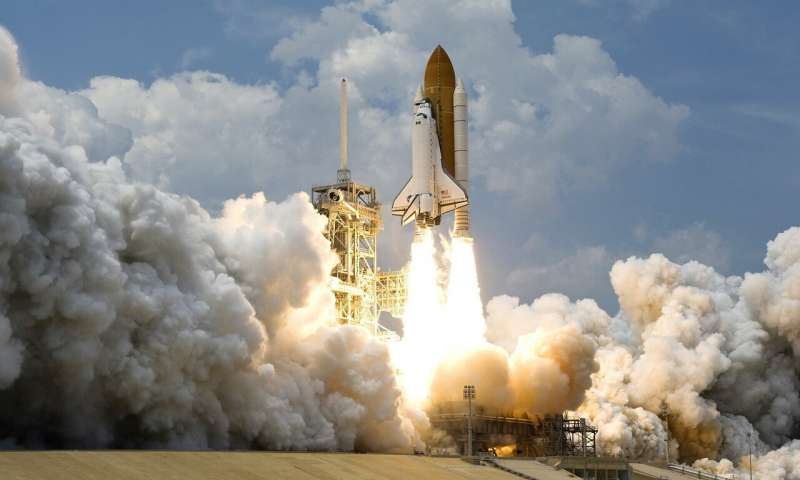 Research published this week in Science Advances shows that it may be possible to create rocket fuel that is much cleaner and safer than the hypergolic fuels that are commonly used today. And still just as effective. The new fuels use simple chemical “triggers” to unlock the energy of one of the hottest new materials, a class of porous solids known as metal-organic frameworks, or MOFs. MOFs are made up of clusters of metal ions and an organic molecule called a linker.

Satellites and space stations that remain in orbit for a considerable amount of time rely on hypergols, fuels that are so energetic they will immediately ignite in the presence of an oxidizer (since there is no oxygen to support combustion beyond the Earth’s atmosphere). The hypergolic fuels that are currently mainly in use depend on hydrazine, a highly toxic and dangerously unstable chemical compound made up of a combination of nitrogen and hydrogen atoms. Hydrazine-based fuels are so carcinogenic that people who work with it need to get suited up as though they were preparing for space travel themselves. Despite precautions, around 12,000 tons of hydrazine fuels end up being released into the atmosphere every year by the aerospace industry.

“This is a new, cleaner approach to making highly combustible fuels, that are not only significantly safer than those currently in use, but they also respond or combust very quickly, which is an essential quality in rocket fuel,” says Tomislav Friščić. He is a professor in the Chemistry Department at McGill, and co-senior author on the paper along with former McGill researcher Robin D. Rogers.

“Although we are still in the early stages of working with these materials in the lab, these results open up the possibility of developing a class of new, clean and highly tunable hypergolic fuels for the aerospace industry,” says the first author, Hatem Titi, a post-doctoral fellow who works in Friščić’s lab.

Friscis is interested in commercializing this technology, and will work with McGill and Acsynam, an existing spin-off company from his laboratory, to make this happen.