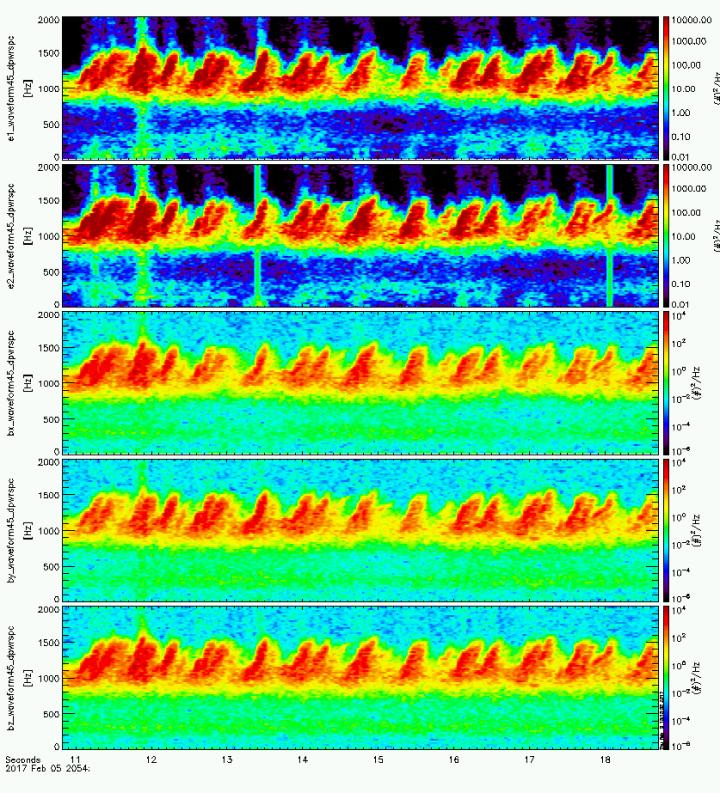 Bursts of electromagnetic waves named “chorus” captured by the Arase/PWE in the inner magnetosphere.

Earth is constantly being hammered by charged particles emitted by the Sun that have enough power to make life on Earth almost impossible. We survive because Earth’s magnetic field traps and deflects these particles, preventing the vast majority of them from ever reaching the planet’s surface. The trapped particles bounce back and forth between the North and South poles in complex, ever-changing patterns that are also influenced by equally intricate and shifting electric fields. We get to enjoy the sight of those particles when the bands they move in (the Van Allen radiation belts) dip into our atmosphere near the poles creating the Northern (and Southern) lights. However, bursts of these particles can damage satellites and sensitive equipment on the ground.

It is therefore vital to understand the intricacies of the radiation belts. So far, NASA have launched twin satellites to study the Van Allen belts–however, their orbits only allow them to explore the equatorial regions. This limits our ability to understand flow of particles and prevents us from predicting their effects on all satellites.

To also explore regions further from the equator, the Institute of Space and Astronautical Science, a division of the Japan Aerospace Exploration Agency, launched the Arase satellite in 2016. A Japan-based research team centered at Kanazawa University equipped the Arase satellite with multiple different sensors (termed the Plasma Wave Experiment) to probe the electric field and plasma waves in the Earth’s inner magnetosphere. Now, they have collected their first set of data from their sensors, which they recently published in the Springer journal Earth, Planets and Space.

The Arase consists primarily of electric and magnetic field detectors covering a wide frequency range; it can also measure plasma/particles in a wide energy range. To improve efficiency, an on-board computer studies the correlations between the fields and the particles before sending only the most important information back to Earth.

“The Plasma Wave Experiment equipment has passed initial checks and has successfully acquired high quality data. Huge amount of burst waveform data has been taken, and we should soon know a lot more about mechanisms of wave-particle interaction occurring in the inner magnetosphere than before. Another strength of our project is that we can also compare the satellite data with data collected simultaneously on the ground. We expect those comparisons will greatly broaden our understanding of this area of science,” first author Yoshiya Kasahara says.

Understanding how electrons and other particles are hurled out of the magnetosphere onto our planet could be key to predicting such bursts and protecting against them.