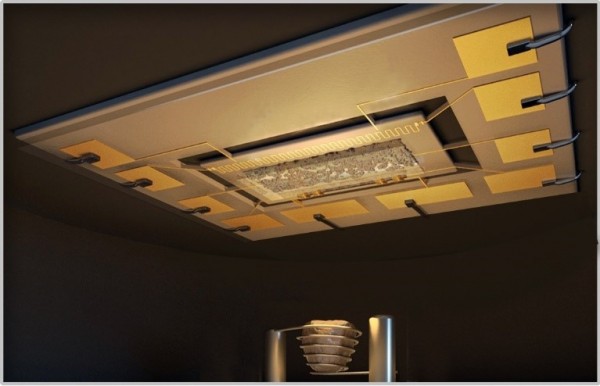 The experimental setup for measuring specific heat includes a suspended Si membrane (the “nano trampoline”) a thin copper meander used as a heater, and a thin niobium nitride film acting as a thermometer. The two dimensional superconductors are prepared by evaporation of lead from a heated basket. Credit: Shahar Medalion

A research group from Bar-Ilan University, in collaboration with French colleagues at CNRS Grenoble, has developed a unique experiment to detect quantum events in ultra-thin films. This novel research, to be published in the scientific journal Nature Communications, enhances the understanding of basic phenomena that occur in nano-sized systems close to absolute zero temperature.

A phase transition is a general term for physical phenomena wherein a system transits from one state to another as a result of changing the temperature. Everyday examples are the transition from ice to water (solid to liquid) at zero degrees centigrade, and from water to vapor (liquid to gas) at 100 degrees.

The temperature at which transition takes place is called the critical point. Near this point interesting physical phenomena occur. For example, as water is heated, small gas regions start forming and the water bubbles. As the temperature of the liquid is raised towards the critical point the size of the gas bubbles grows. As the size of the bubble becomes comparable to the wavelength of light, the light is scattered and causes the normally transparent liquid to appear “milky” – a phenomenon known as critical opalescence.

In recent years the scientific community has shown growing interest in quantum phase transitions in which a system transits between two states at absolute zero temperature (-273 degrees) as a result of manipulating a physical parameter such as magnetic field, pressure or chemical composition instead of temperature. In these transitions the change occurs not due the thermal energy provided to the system by heating but rather by quantum fluctuations. Although absolute zero is not physically attainable, characteristics of the transition can be detected in the system’s very low-temperature behavior near the quantum critical point. Such characteristics include “quantum bubbles” of one phase in the other. The size and lifetime of these quantum bubbles increase as the system is tuned towards the critical point, giving rise to a quantum equivalent of critical opalescence.

The theoretical prediction of such quantum criticality was provided a few decades ago, but how to measure this experimentally has remained a mystery. Prof. Aviad Frydman of Bar-Ilan University’s Department of Physics and Institute of Nanotechnology and Advanced Materials, and his student Shachar Poran, together with Dr. Olivier Bourgeois of CNRS Grenoble, have for the first time provided the answer.

In normal phase transitions there is a unique measurable quantity which is used to detect a critical point. This is the specific heat which measures the amount of heat energy that should be supplied to a system in order to raise its temperature by one degree. Increasing the temperature of a system by two degrees requires twice the energy that is needed for increasing it by one degree. However, close to a phase transition this is no longer the case. Much of the energy is invested in creating the bubbles (or fluctuations) and, therefore, more energy must be invested to generate a similar change in temperature. As a result, the specific heat rises near the critical point and its measurement provides information on the fluctuations.

Measuring specific heat of a system close to a quantum critical point poses a much greater challenge. Firstly, the measurements must be carried out at low temperatures. Secondly, the systems under study are nano-thin layers which require extremely sensitive measurements. Frydman’s group overcame these obstacles by developing a unique experimental design based on a thin membrane suspended in air by very narrow bridges, thereby forming a “nano-trampoline”. This setup enabled specific heat measurements of the thin films through a quantum phase transition from a superconducting state to an electrically insulating state close to absolute zero temperature.

The measurement performed by Frydman’s group is the first of its kind. The results demonstrate that just as in the case of a thermal phase transition, the specific heat similarly increases in the vicinity of a quantum critical point, and can be used as a probe for quantum criticality. This work is expected to be a milestone in the understanding of physical processes that govern the behavior of ultrathin systems at ultralow temperatures.