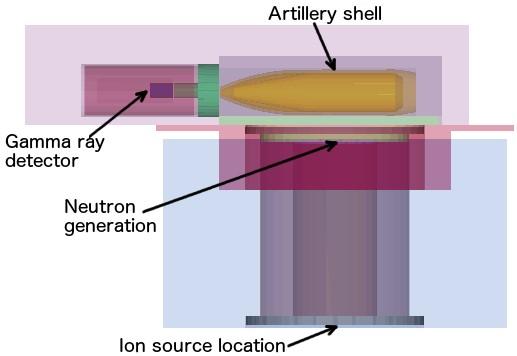 This is a simulated instrument with the artillery shell. Source: Camille Bélanger-Champagne

These detection systems should be non-destructive but still be able to detect and identify the threat objects, even from inside a shielding or masking enclosure. Active interrogation methods that use penetrative particle beams can reveal the presence of CBRNE materials.

“In prompt gamma neutron activation analysis (PGNAA), an unknown object is exposed to a high neutron flux and the outgoing prompt gamma radiation is measured with a high energy resolution gamma spectrometer. The emitted gamma rays are isotope-specific, so gamma neutron activation analysis can be used to detect the presence of nearly all elements,” says Dr. Camille Bélanger-Champagne from the Helsinki Institute of Physics (HIP) at the University of Helsinki.

She is a physicist in the NINS3 research team that recently published in PLOS ONE their work on instruments for active neutron interrogation of unexploded artillery shells.

The relative intensity of the gamma ray peaks in the energy spectrum can be used to measure the relative fractions of elements inside the unknown target.

Applications of the PGNAA technique exist in many contexts, and specialized systems are designed based on the materials, elements and isotopes that must be identified in each application. In the subset of applications that focus on military ordnance, explosives and chemical weapons are the principal identification targets inside unknown objects. The ratio of the main gamma-ray peaks of hydrogen and nitrogen can be used to identify the presence of high explosives. The gamma-ray signal from arsenic, fluorine, phosphorus, sulfur and chlorine is needed to identify chemical weapons.

The most common explosives can be uniquely identified by measuring the elemental hydrogen/nitrogen ratio with a precision better than 10 per cent.

A precise timing instrument with an intense pulsed neutron generator

Monte Carlo simulations done by the HIP team using the University of Helsinki computing clusters have been used to design two variants of a new prompt gamma neutron activation instrument that can achieve this precision. The instrument features an intense pulsed neutron generator with precise timing.

“Measuring the hydrogen peak from the target explosive is especially challenging because the instrument itself contains hydrogen, which is needed for neutron moderation and shielding,” Dr. Camille Bélanger-Champagne says.

By iterative design optimization, the fraction of the hydrogen peak counts coming from the explosive under interrogation increased from 53 per cent to 74 per cent for the benchmark design. In the optimized design variants, the hydrogen signal from a high-explosive shell can be measured to a statistics-only precision better than 1 per cent within 30 minutes.

Next generation neutron generators with partners

In this project, researchers from HIP have partnered with an accelerator technology company, JHV Physics and a nuclear safety training and consulting company, HT Nuclear to design the new instrument for gamma neutron activation analysis of artillery shells. JHV Physics is developing a next generation neutron generator with a high intensity beam and precisely timed neutron pulses. A prototype instrument has been built and commissioning of the newly designed instrument is ongoing.