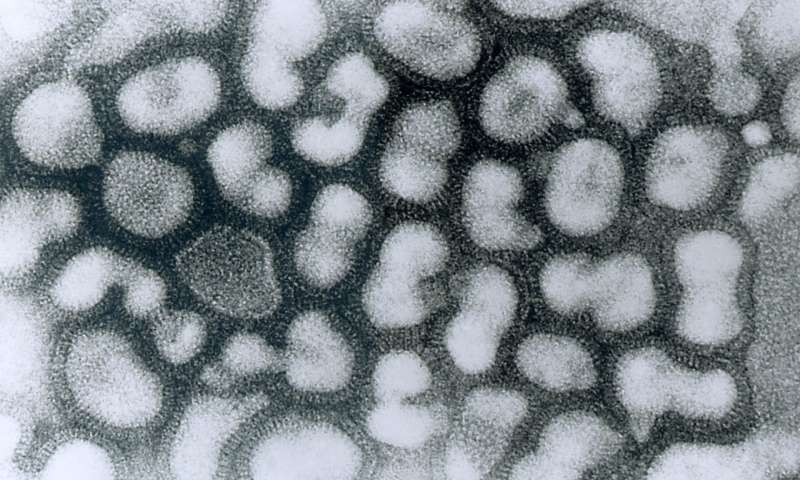 Influenza A viruses are highly adaptable, managing to infect and replicate rapidly and to spread efficiently from person to person. An outbreak has the potential to kill millions of people globally, and many scientists are racing to develop drugs that target the fundamental processes of the virus, such as its genetic replication or acid transport.

Researchers at the University of Chicago and University of Kent in the United Kingdom have discovered critical information about the behavior of the influenza A M2 protein, which facilitates the release of infectious particles, called virions, from the infected host cell. This discovery could lead to drugs that inhibit M2, thus blocking the virus from infecting other cells.

Viruses spread from cell to cell through budding, wherein the infected cell’s membrane begins to curve into a pouch and form a neck. The neck is then cut in a process called scission, and the pouch containing viral matter is set free to attack other cells. In influenza, experimental evidence has shown that a protein called M2 protein plays this critical role.

Through computer simulations, UChicago researchers have now learned that the process of gathering M2 proteins in the budding membrane neck is facilitated by the entropy, or disordered state, of the lipids in the region. Once there, the proteins can then cooperate to cut the bud neck to release the virion.

The M2 protein is a cone-like structure with four helices. “It likes to be in the neck because of the way it is bent,” said Gregory Voth, the Haig P. Papazain Distinguished Service Professor in Chemistry and corresponding author on the paper.

The shape of the protein, along with the interaction between proteins and the flexibility of the lipids in the region, is important for drug development.

“If you wanted to impair this function of the M2 protein, you might find a drug that binds tightly and distorts that shape. If it can’t bud off, you can stop the virus,” said Jesper Madsen, first author and postdoctoral fellow at the University of Chicago.

The researchers used a special technique called coarse-grained molecular modeling to show how the M2 assembles in the membrane neck. “When you simplify by coarsening, or grouping interactions together, you can see a complex collaborative process that would be hard to see experimentally or with other higher resolution computational methods,” Voth said.

Now that researchers have identified the fundamental physics behind this process, they are working with experimental scientists to continue their research based on the computational predictions. The discovery could eventually lead to a new avenue for anti-influenza treatment.