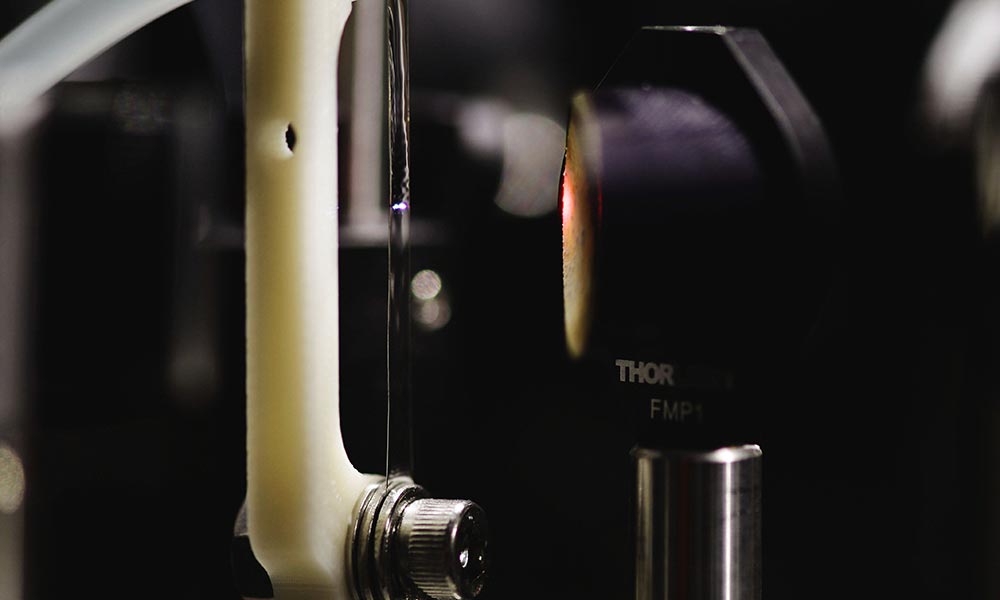 Researchers use lasers to generate terahertz pulses via interaction with a target. In this case, the target was an extremely thin water film—approximately 200 microns or about the thickness of two pieces of paper—created using water suspended between two aluminum wires. (University of Rochester photo / Kaia Williams)

Generating terahertz radiation from water was previously thought to be impossible.

However, a researcher from the University of Rochester has achieved this goal after working on it for nearly a decade, generating terahertz radiation—a form of electromagnetic radiation in the far infrared frequency range—from an extremely thin film of water.

“Figuring out how to generate terahertz waves from liquid water is a fundamental breakthrough because water is such an important element in the human body and on Earth,” Xi-Cheng Zhang, the M. Parker Givens Professor of Optics at the University of Rochester, said in a statement.

Terahertz waves have the ability to nondestructively pass through solid objects, including those made of cloth, paper, wood, plastic and ceramics and produce images of the interiors of the objects.

The energy of a terahertz photon is also weaker than an X-ray photon and are non-ionizing—meaning they do not have enough energy to remove an electron from an atom and do not have the same harmful effects on human tissue and DNA.

Terahertz waves have a number of applications, such as discovering bombs in suspicious packages, identifying murals hidden beneath coats of paint and detecting tooth decay.

“Terahertz waves have a capacity to see through clothing, which is why you have these sub-terahertz body scanners at airports,” Zhang said. “These waves can help to identify if an object is explosive, chemical or biological, even if they can’t tell exactly what the object is.”

This was created using water suspended by surface tension between two aluminum wires. Researchers focus a laser into the water film, which acts as an emitter for the terahertz radiation output. The researchers sought a film of water thin enough so that the terahertz photons generated by the laser beam would not be absorbed,  but also thick enough to withstand the laser’s energy.

“Water was considered the enemy of terahertz waves because of water’s strong absorption,” Zhang said. “We always tried to avoid water but it is a surprisingly efficient terahertz source.”

It was previously thought that water would be impossible to use as a target because it is such a strong absorber.