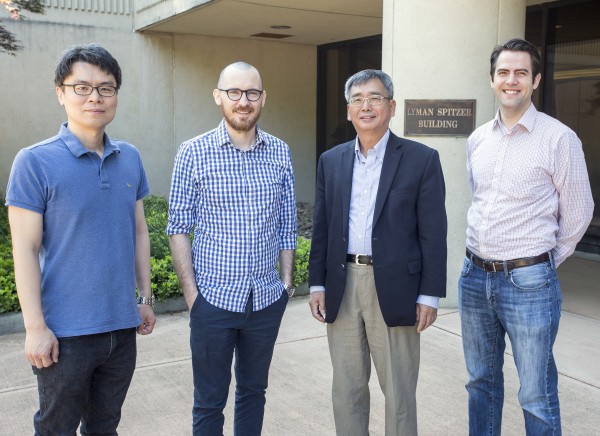 Physicists at the U.S. Department of Energy’s (DOE) Princeton Plasma Physics Laboratory (PPPL) have simulated the spontaneous transition of turbulence at the edge of a fusion plasma to the high-confinement mode (H-mode) that sustains fusion reactions. Credit: Elle Starkman

Physicists at the U.S. Department of Energy’s (DOE) Princeton Plasma Physics Laboratory (PPPL) have simulated the spontaneous transition of turbulence at the edge of a fusion plasma to the high-confinement mode (H-mode) that sustains fusion reactions. The detailed simulation is the first basic physics, or first-principles-based, modeling with few simplifying assumptions.

The research was achieved with the extreme-scale plasma turbulence code XGC developed at PPPL in collaboration with a nationwide team. The findings provide the physics-basis for the successful operation of current and future tokamaks that will produce powerful and economical fusion reactions.

This massively parallel simulation, which reveals the physics behind the transition, utilized most of a supercomputer’s power. The XGC code ran for three days and took 90 percent of the capacity of Titan at the Oak Ridge Leadership Computing Facility (OLCF), which is the nation’s most powerful supercomputer for open science and capable of performing up to 27 million billion (1015) operations per second.

“After 35 years, the fundamental physics of the bifurcation of turbulence into H-mode has now been simulated, thanks to the rapid development of the computational hardware and software capability,” said C.S. Chang, first author of the April Physical Review Letters paper [118, 175001 (2017)] that reported the findings. Co-authors included a team from PPPL, the University of California, San Diego, and the MIT Plasma Science and Fusion Center. Seung-Hoe Ku of PPPL performed the simulation.

As an example of the use of the model, the core of the plasma inside the seven-story ITER tokamak, the international fusion experiment under construction in France, will have to be more than 10 times hotter than the core of the sun, whose temperature is 15 million degrees Celsius. Yet the edge of the plasma, located about 2 meters away, will be 1,000 times cooler, with most of the temperature dropping over a radial slope whose width is only a few percent of the total plasma size.

In 1982, German researchers discovered that the edge of the plasma can spontaneously bifurcate into a high pedestal with a steep gradient, or transport barrier, that produces the H-mode confinement and maintains the heat of the plasma core. This bifurcation takes place when the heating power of the tokamak is raised above a critical level.

Creation of the transport barrier occurs almost instantaneously. The buildup results from suppression of the edge turbulence, which drops from high to low amplitude in less than tenth of a millisecond. The puzzle baffling physicists for more than three decades is what causes this transition to happen.

Researchers have long held two conflicting stories, based on reduced models and various degrees of simplifying assumptions, which arise from the complexity of the plasma edge and the lack of computing power. One school proposes that the transformation comes from a turbulence-generated sheared flow of edge plasma generated by a process called “Reynolds stress.” Opposing this view is a school that attributes the bifurcation to a non-turbulent sheared flow.

The PPPL extreme-scale code indicates that both stories are partly correct. The simulation reveals that the bifurcation results from the synergistic relationship between the Reynolds stress-generated sheared flow and the non turbulent-generated sheared flow, which is technically known as the “X-point orbit loss-driven” and “neoclassical” flow. In short, says the paper, “the experimental argument based upon the orbit loss mechanism … and the conventional Reynolds stress argument work together.”

For ITER and other next-generation machines, the bifurcation to H-mode could require an increase in heating power if the non turbulent-driven sheared flow proves weaker than today’s tokamaks require. The reverse also holds true: if the non turbulent-driven sheared flow should prove to be stronger than currently anticipated for ITER, less heating power may be needed to achieve the crucial transformation to H-mode.

The OLCF is a DOE Office of Science User Facility at Oak Ridge National Laboratory. Support for this work came from the DOE Office of Science (Fusion Energy Sciences). PPPL, on Princeton University’s Forrestal Campus in Plainsboro, N.J., is devoted to creating new knowledge about the physics of plasmas — ultra-hot, charged gases — and to developing practical solutions for the creation of fusion energy. The Laboratory is managed by the University for the U.S. Department of Energy’s Office of Science, which is the largest single supporter of basic research in the physical sciences in the United States, and is working to address some of the most pressing challenges of our time. For more information, please visit science.energy.gov.