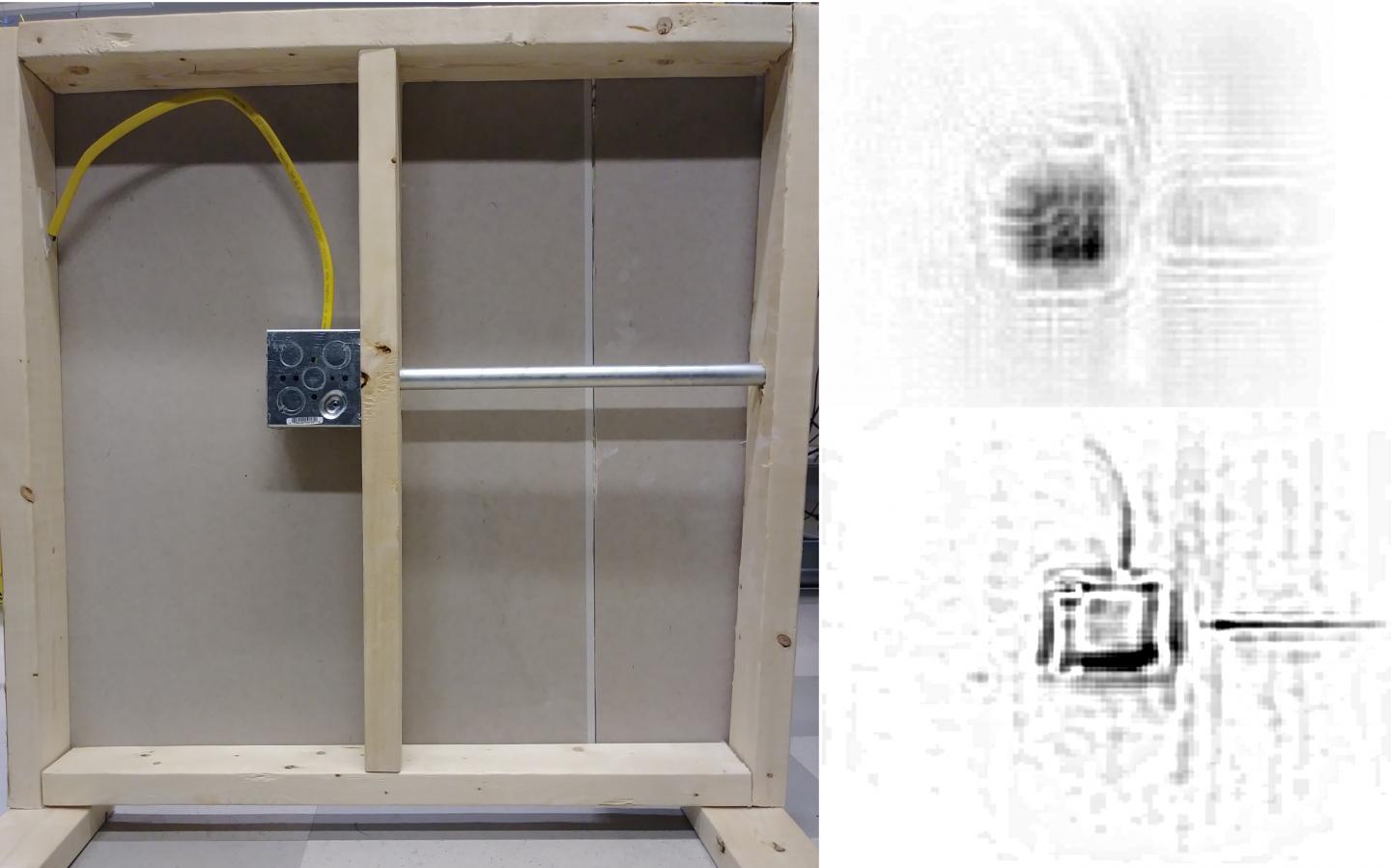 A view of a microwave scan of a typical wall interior before and after distortions have been removed. By taking into account the types of distortions typically created by flat, uniform walls, the new algorithm allows for better scans without needing to know what the wall is made of beforehand. Source: Daniel Marks, Duke University

Researchers at Duke University have devised a way to see through walls using a narrow band of microwave frequencies without any advance knowledge of what the walls are made out of. Besides having obvious applications in the realm of security, the approach could lead to inexpensive devices to help construction workers easily locate conduits, pipes and wires.

"Most technologies that can see through walls use a broad range of frequencies, which makes them expensive," said Daniel Marks, associate research professor of electrical and computer engineering at Duke. "They also don't have very good resolution. So while they might be fine for seeing a person moving on the other side of a wall, they're terrible for finding thin conduits or wires."

Current approaches also typically rely on knowing what material the wall is made out of before trying to see through it. This allows the software to predict how the wall will affect the scanning waves so that it can separate the echoes and distortions from the solid objects being sought.

In the new paper, Marks and his colleagues David R. Smith, the James B. Duke Professor of Electrical and Computer Engineering, and Okan Yurduseven, a postdoctoral researcher in electrical and computer engineering at Duke, take advantage of a wall's symmetry instead.

Because walls are generally flat and uniform in all directions, they distort waves in a symmetrical fashion. The newly described technology uses this symmetry to its advantage.

"We wrote an algorithm that separates the data into parts -- one that shows circular symmetry and another that doesn't," explained Yurduseven. "The data that doesn't have any symmetry is what we're trying to see."

The technique uses only a single frequency to scan because it cuts down on the number of interference patterns created by the wall and single-frequency emitters are much less expensive than broadband emitters. Sticking to a narrow range also means that a future device would be easier to clear with the Federal Communications Commission (FCC), as it would be easy to avoid interfering with microwave frequencies dedicated to other technologies, such as Wifi, cellular phone service and Bluetooth.

The researchers built a prototype device to see how well it would work. In their laboratory, they constructed a couple of different kinds of walls and then placed objects behind them that a worker might want to find, like studs, electrical conduits, wires and junction boxes.

Looking at the raw data after scanning through gypsum plasterboard, it's difficult to make out anything other than a metal junction box, which is 4 inches wide and 2 inches thick. But after analyzing the data and removing the symmetrical patterns, the pictures clear considerably, and each individual component is easily recognized.

"We envision combining this technique with a machine vision system that someone could move over a wall to see what's inside," said Marks. "We think the technology has the price point and sensitivity to make an impact on the market." What is hyperspectral image analysis?