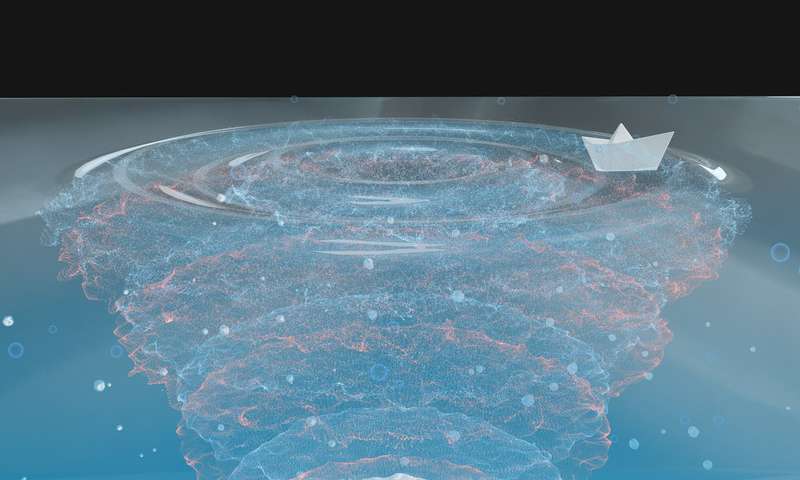 Ultrasound driven surfer: a standing wave can be produced on the water’s surface with a hologram, on which a paper boat surfs along in circles. Credit: Kai Melde / MPI for Intelligent Systems

Sound can now be structured in three dimensions. Researchers from the Max Planck Institute for Intelligent Systems and the University of Stuttgart have found a way of generating acoustic holograms, which could improve ultrasound diagnostics and material testing. The holograms can also be used to move and manipulate particles.

Peer Fischer, a Research Group Leader at the Max Planck Institute for Intelligent Systems and Professor at the University of Stuttgart, normally works on micro- and nanorobots. His lab also develops the nanofabrication methods that are needed to develop such tiny swimmers. Holography was not one of his core interests. “However, we were looking for a way to move large numbers of microparticles simultaneously so that we could assemble them into larger more complex structures”, explains Fischer. His research team has now found such a method with acoustic holography, and it reports the first acoustic hologram in this week’s issue of Nature. The method promises a number of applications in addition to particle manipulation.

Until now, sound could only be shaped using complex technology

It is well known that holograms in optics offer a means to take photography into the third dimension. Unlike photos that are taken with a conventional camera, holography exploits the information where reflected light reaches its maximum intensity. Physicists talk about the phase of the wave. Upon reflection from a three-dimensional object, the phase shifts and provides information about the spatial structure of the object. This gives holograms their characteristic three-dimensional appearance.

Manipulating the three-dimensional structure of acoustic waves was previously only possible with what physicists call a phased array transducer. This is an ensemble of many acoustic sources positioned side by side that can individually emit sound with varying phase delays. The necessary driving electronics, however, is bulky and expensive. “We can now generate sound in a 3-D without this complex technology“, says Kai Melde, who conducted the experiments at the Max Planck Institute for Intelligent Systems as part of his Ph.D. research.

The researchers first demonstrated a hologram that generates sound pressure in the shape of Pablo Picasso’s dove of peace. Microparticles suspended in a liquid follow the pattern and form the image. To achieve this, the team first computed where and how strongly the acoustic waves, or more specifically their phases, needed to shift to translate the lines of the dove into an area of increased sound pressure. In this way, they attained a map of the phase shifts. Based on this map, they then fabricated the acoustic hologram: using a 3-D printer they created a relief from a plastic that transmits sound faster than the surrounding liquid. The printer applied different thicknesses of material depending on the required phase delay.

Ultrasound waves transmitted through the hologram interfered behind the relief plate in such a way that the sound pressure reproduced Picasso’s dove of peace. And as soon as they positioned a container filled with water and microparticles in the focal region, the particles were quickly pushed into the shape of the dove. The researchers showed that the technology can also work in 3-D by forming a holographic stack with the images ‘1’, ‘2’ and ‘3’.

Microparticles that surf and fly

“While our technology does not dynamically modify the three-dimensional structure of the sound field, it can nevertheless cause dynamic motion”, says Peer Fischer. “We are surprised that nobody has come up with this idea before.”

Even if the Stuttgart-based researchers cannot change the acoustic sculptures on the fly, they are able to move particles on defined trajectories. They demonstrated this with a polymeric particle on water: using the sound pressure hologram, they generated a ring-shaped crest on the water’s surface which looked as if they had frozen the ripple caused by a stone that was thrown into the water. A particle floating on the water and influenced by the sound pressure quickly swung to the crest of the wave and surfed along the circle until the sound was switched off. “Such contact-free methods to move particles using sound could be interesting as a material transporter for process engineering”, says Kai Melde.

Acoustic holograms create even more possibilities for manipulating particles than the researchers originally had in mind. And apart from exposing particles to acoustic waves, holograms could also be used with ultrasound, for example in medicine and material testing. “There’s a great deal of interest in using our invention to easily generate ultrasound fields with complex shapes for localized medical diagnostics and treatments”, says Peer Fischer. However, it is not yet clear where exactly acoustic holograms will be used. “But I am sure that there are a lot of areas that could be considered.”