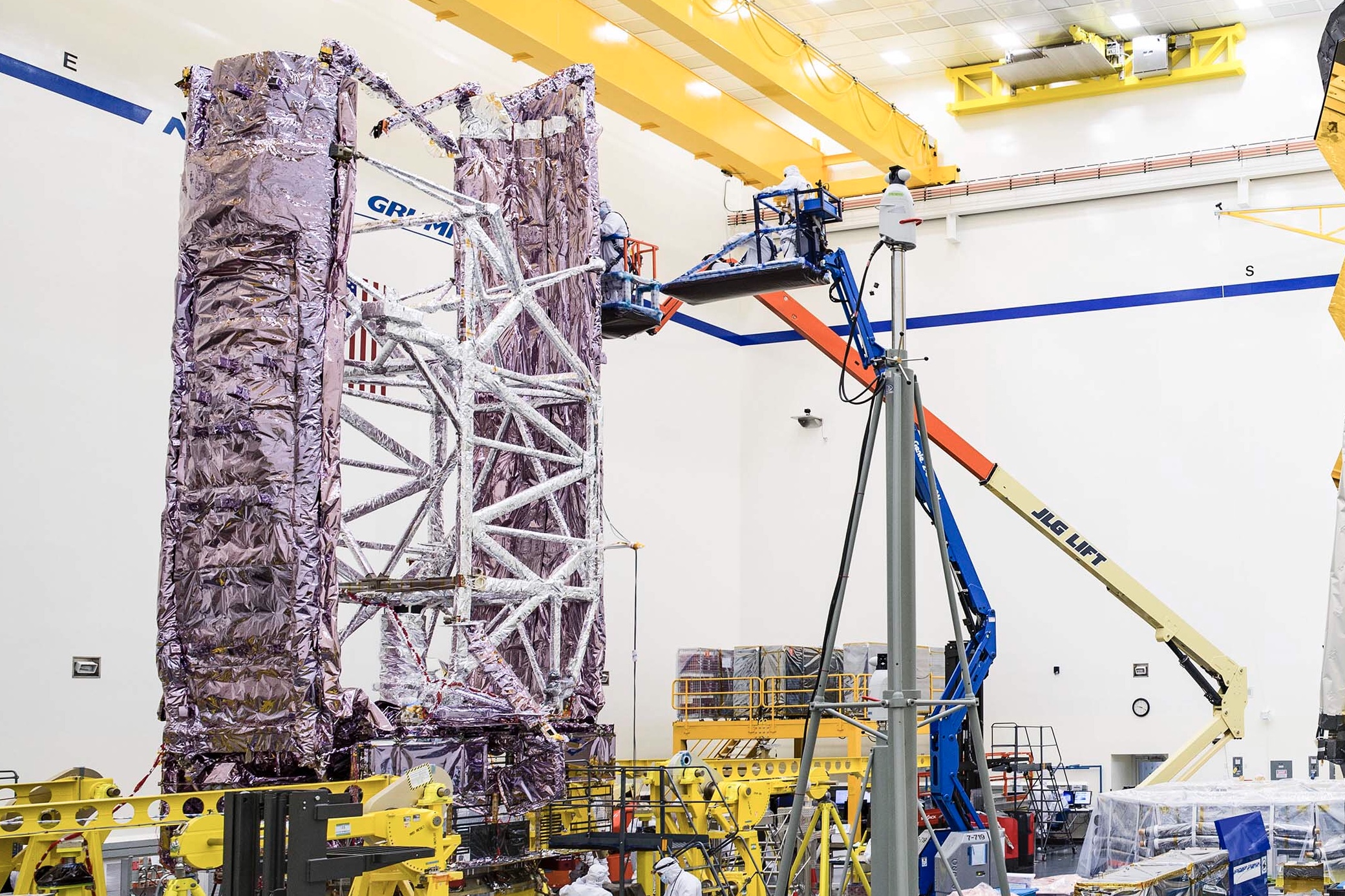 NASA’s James Webb Space Telescope has successfully passed another series of critical testing milestones on its march to the launch pad.

In recent acoustic and sine vibration tests, technicians and engineers exposed Webb’s spacecraft element to brutal dynamic mechanical environmental conditions to ensure it will endure the rigors of a rocket launch to space.

During liftoff, rockets generate extremely powerful vibrations and energetic sound waves that bounce off the ground and nearby buildings and impact the rocket as it makes its way skyward. Technicians and engineers aim to protect Webb from these intense sound waves and vibrations.

To simulate these conditions, flight components are intentionally punished with a long litany of tests throughout different facilities to identify potential issues on the ground. Webb was bombarded by powerful sound waves from massive speakers and then placed on an electrodynamic vibration table and strongly but precisely shaken. Together, these tests mimic the range of extreme shaking that spacecraft experience while riding a rocket to space.

One half of the Webb observatory, known as the “spacecraft element,” was the subject of this latest testing. The spacecraft element consists of the “bus,” which is the equipment that actually flies the observatory in space, plus the tennis-court-size sunshield that will keep Webb’s sensitive optics and instruments at their required super-cold operating temperature.

Northrop Grumman in Redondo Beach, Calif., NASA’s lead industrial teammate on Webb, designed and built the spacecraft element, and conducted the testing in their facilities with NASA support and guidance. Northrop Grumman and NASA engineers and technicians worked tirelessly together as a team over the last few months to complete these complex dynamic mechanical environmental tests.

The initial attempt at acoustic testing last spring uncovered a problem with a specific portion of sunshield hardware, which required some modifications taking several months. Subsequently, the acoustic test was redone, and this time everything went successfully. With acoustic testing complete, the spacecraft element was transported in a mobile cleanroom to a separate vibration facility, where its spacecraft hardware was exposed to the bumps and shakes that occur when riding a rocket soaring through the atmosphere at high Mach speeds.

Northrop Grumman, NASA and its partner, ESA (European Space Agency), are familiar with the flight profile and performance of the Ariane 5 rocket that will carry Webb into space in early 2021, so technicians tuned the tests to mimic the conditions it’s expected to face during launch. 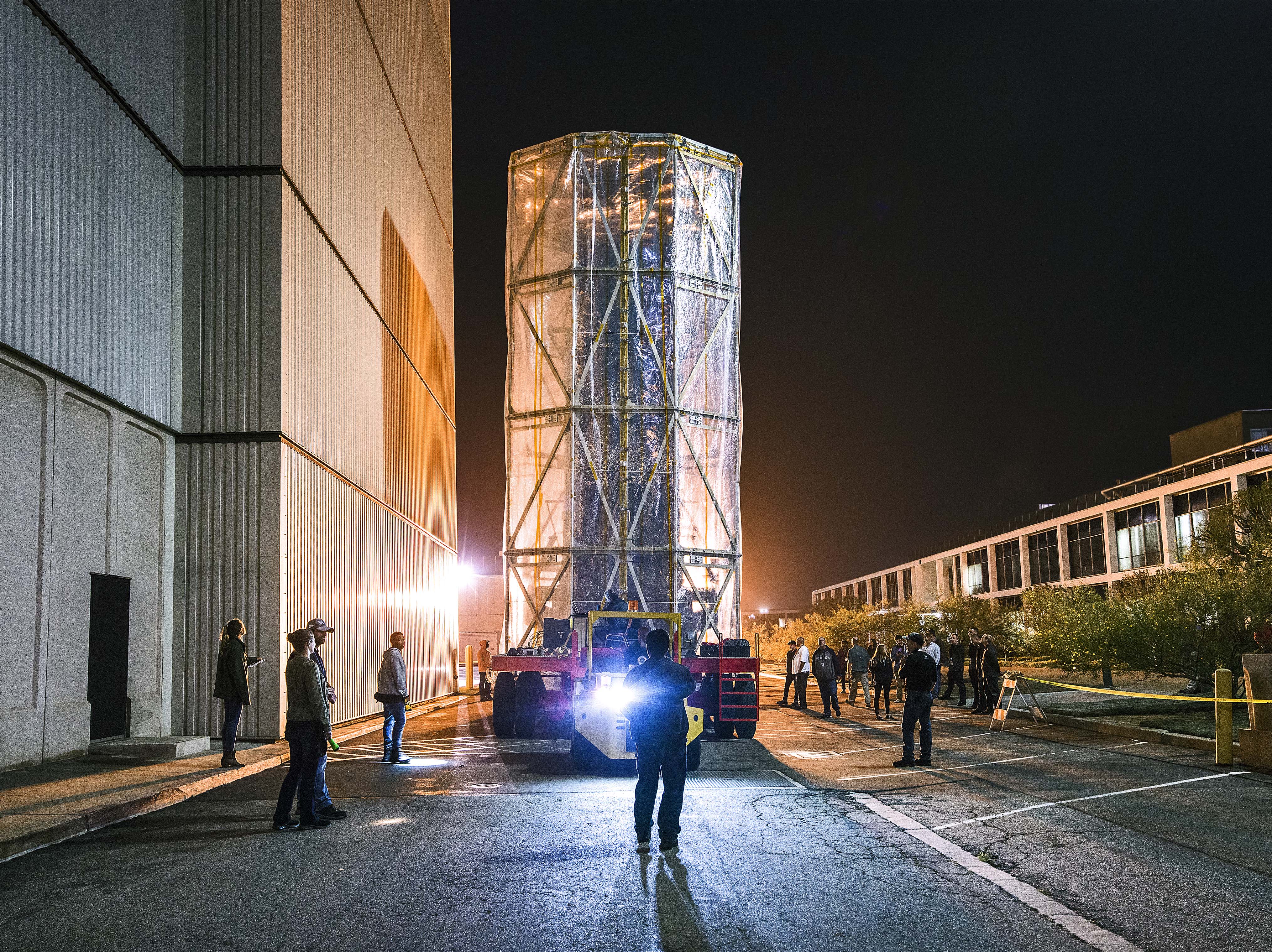 To keep Webb’s spacecraft element and its sensitive instruments contaminant free, technicians and engineers enclose it in a protective clamshell that serves as a mobile cleanroom while in transport. Image: NASA’s Goddard Space Flight Center/Chris Gunn

With the successful completion of its mechanical environmental testing, the spacecraft element is being prepared for thermal vacuum testing. This other major environmental test will ensure it functions electrically in the harsh temperatures and vacuum of space. The other half of Webb, which consists of the telescope and science instruments, had completed its own vibration and acoustic testing at Goddard and cryogenic-temperature thermal vacuum testing at NASA’s Johnson Space Center in Houston prior to delivery at Northrop Grumman last year.

Once finished with thermal vacuum testing, the spacecraft element will return to the giant cleanroom where it was assembled, to be deployed from its folded-up launch configuration and into its operational configuration, which will be the final proof that it has passed all of its environmental tests. Then, the two halves of Webb—the spacecraft and the telescope elements—will be integrated into one complete observatory for a final round of testing and evaluation prior to launch.

Webb will be the world’s premier space science observatory. It will solve mysteries of our solar system, look beyond to distant worlds around other stars, and probe the mysterious structures and origins of our universe and our place in it. The scientific complement to NASA’s Hubble Space Telescope, the Webb was assembled in a Class 10,000 cleanroom at NASA’s Goddard Space Flight Center. Webb is an international project led by NASA with its partners, ESA (European Space Agency), and CSA (Canadian Space Agency).