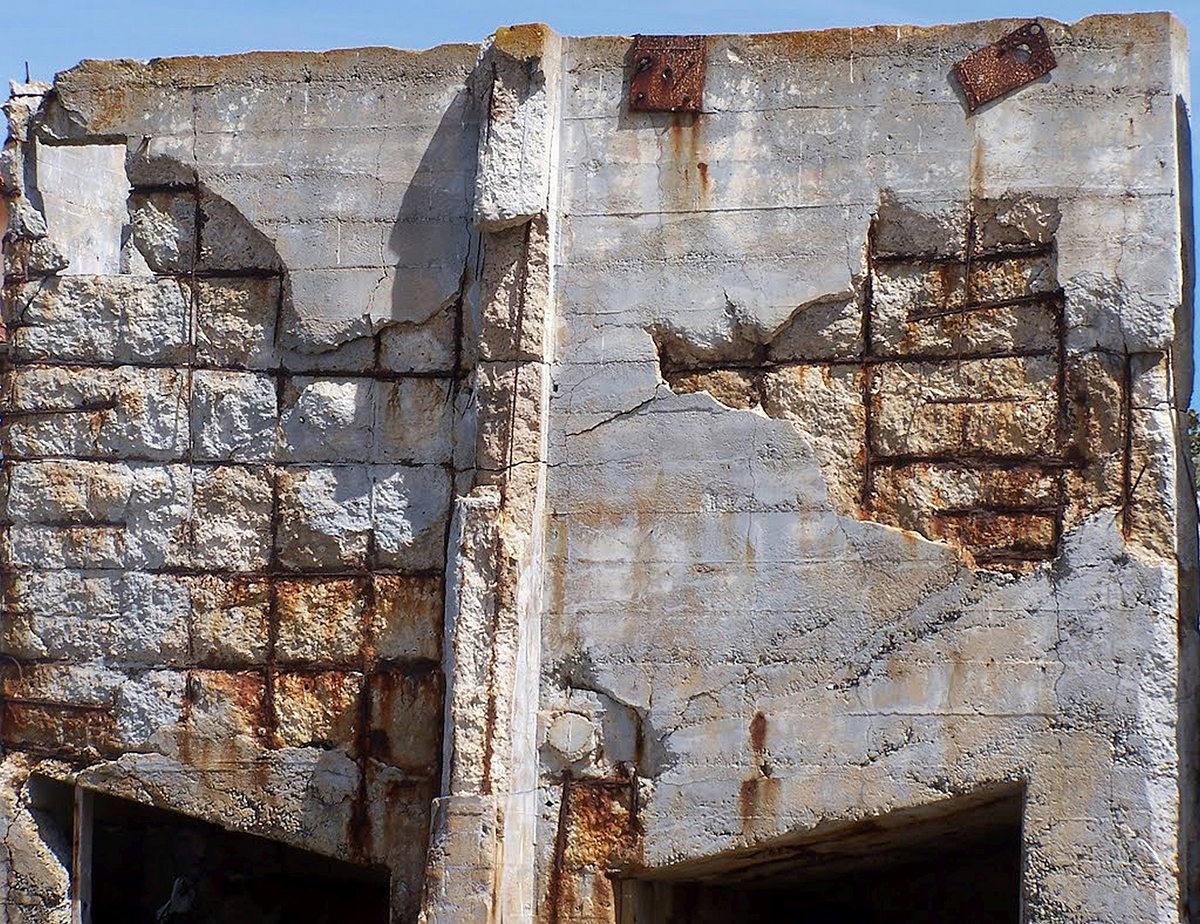 An abandoned building on Northern California’s McAbee Beach shows the destructive power of corrosion on a steel-reinforced concrete structure. A new NIST evaluation method using terahertz waves can detect the early stages of corrosion on steel rebars directly through their concrete covering. Source: With Permission by Per Loll, Denmark

When you suffer a fall, an on-the-field collision or some other traumatic blow, the first thing the doctor will do is take an X-ray, CT scan or MRI to determine if anything has been damaged internally. Researchers at the National Institute of Standards and Technology (NIST) are using the same principle, but in a more powerful form, to detect corrosion, the primary danger threatening the health of the steel framework within the nation’s bridges, roads and other aging physical infrastructure.

What they have developed is a noninvasive “spectral fingerprint” technique that reveals the corrosion of concrete-encased steel before it can cause any significant degradation of the structure it supports. The detection method is described in a new paper(link is external) in the journal Applied Magnetic Resonance.

When water and oxygen corrode iron, different iron oxide products are produced, with the two most common being goethite and hematite. “The brown rust that forms when you leave a hammer out in the rain is mostly goethite, and when a steel reinforcing bar [rebar] corrodes inside a concrete bridge deck, that is mostly hematite,” said NIST physical chemist Dave Plusquellic. “We have shown in our new study with goethite, and our previous work with hematite(link is external), that terahertz radiation—electromagnetic waves with frequencies 10 to 100 times higher than the microwaves used to cook food—can detect both corrosion products in the early stages of formation.”

Current imaging methods for uncovering corrosion use microwaves to record changes in the physical state of the affected steel, such as changes in the thickness of a rebar within the concrete of a bridge or other structure. “Unfortunately, by the time such changes are detectable, the corrosive process is already well on its way toward causing cracks in the concrete,” said physicist and NIST Fellow Ed Garboczi.

Additionally, Garboczi said most of the microwave imaging methods rely on comparisons with baseline measurements of the steel taken at the time of construction, a practice that only goes back about 25 years. “That’s a real problem since the average age of the 400,000 steel-reinforced concrete bridges in the United States is 50 years and there is no baseline data available for many of them,” he explained.

The NIST terahertz wave detection method works because goethite and hematite are antiferromagnetic. In other words, the pairs of electrons sitting side-by-side within the iron atoms in these materials spin in opposite directions, leaving them unaffected by external magnetic fields. In contrast, the electrons in the iron atoms of a household magnet, which is ferromagnetic, spin in the same direction and are either attracted or repelled by external magnetic fields.

“Terahertz waves will flip the spin alignment of one of the electrons in a pair and get absorbed by hematite or goethite,” Plusquellic said. “Using a millimeter wave detector, we discovered that this antiferromagnetic absorption only occurs within narrow frequency ranges in the terahertz region of the electromagnetic spectrum—yielding ‘spectral fingerprints’ unique to goethite and hematite, and in turn, iron corrosion.”

With current advances in terahertz sources and detectors, the new NIST nondestructive evaluation technique has the potential to rapidly detect tiny amounts of iron-bearing oxides from early-stage corrosion of steel surrounded by concrete, polymer composites (such as pipe insulation in a factory), paints and other protective materials.

“In the laboratory, we have demonstrated that a 2-milliwatt terahertz source can produce waves that detect hematite through 25 millimeters of concrete,” Plusquellic said. “Using terahertz sources with powers in the hundreds of milliwatts and state-of-the-art receivers with unprecedented signal-to-noise ratios, we should be able to penetrate 50 millimeters, the thickness of the concrete covering the first layer of rebar used in most steel-reinforced concrete structures.”

Next up for the NIST team will be an attempt to find a spectral fingerprint for akageneite, an iron corrosion product formed in the presence of chloride ions, which come from sources such as seawater and road deicing salt. “Akageneite can cause problems in steel-reinforced concrete similar to those seen with goethite and hematite,” Garboczi said.

The antiferromagnetic corrosion detection method was first conceived in 2009 by the late William Egelhoff, a NIST fellow and pioneer in the field of magnetic materials.