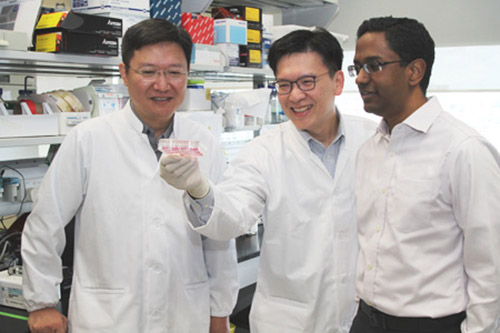 Researchers from the Institute of Bioengineering and Nanotechnology and the National Cancer Centre Singapore who discovered the approach of using patients’ stem cells to test for side effects of drugs. From left: Professor Hanry Yu, Dr. Min-Han Tan, and Dr. Ravindran Kanesvaran. Image: © Institute of Bioengineering and Nanotechnology

Different people react differently to the same drug, yet it is difficult to predict the side effects for an individual in advance. Now, researchers from the Institute of Bioengineering and Nanotechnology (IBN) of A*STAR and the National Cancer Centre Singapore (NCCS) have demonstrated a promising approach to screen for severe side effects by first testing the drug on stem cells made from the patient’s blood.

In Singapore, approximately 8 percent of all hospital admissions are caused by adverse drug reactions and these patients typically require a longer hospitalization stay. In Europe, side effects from medications cause 197,000 deaths annually.

“Adverse side effects from drugs are a major clinical concern, which could and should be preventable. Knowing whether an individual is susceptible to a particular medicine will improve healthcare and treatment outcome. We are confident that our personalized stem cell technology will be of significant clinical value,” says Professor Jackie Y. Ying, Executive Director at IBN.

In a recently published study in Scientific Reports, the researchers used induced pluripotent stem cells — which can transform into any type of cells in the body — to create liver cells from the blood of five kidney cancer patients. Their liver cells were then exposed to the cancer drug pazopanib, which can cause liver damage. Three of the patients were known to react badly to pazopanib, while two of them did not have any side effects.

The results showed that each patient’s newly created liver cells exhibited the same sensitivity to the drug when compared with their post-treatment data from liver biopsies. Further, using these stem cells, the researchers were able to analyze how the drug caused liver damage, which was previously unknown to doctors.

“Our hypothesis was that liver cells made from the individual’s blood might show similar sensitivity or resistance to pazopanib. This study is the first proof-of-concept that our approach can predict drug-induced liver damage for an individual. Importantly, we were able to figure out how the drug works from the way they react to the liver cells, which was unknown to doctors, even after many years of using this drug,” says Tan.

This clinical validation in patients suggests that it would be possible to screen personalized stem cells, comprising a range of liver, lung, kidney and heart cells, to predict whether the patient would get side effects from taking a particular drug.

“We are very excited that this study demonstrates an approach that could transform how drug toxicities are evaluated. It also sheds light on the mechanism of a particular side effect of pazopanib, which may lead to ways to overcome it. We are already planning formal clinical trials on this,” says Dr. Ravindran Kanesvaran, Consultant at NCCS.

The research team will conduct further studies on drugs that affect other types of organs, and hope to work with industry partners to commercialize this technology.