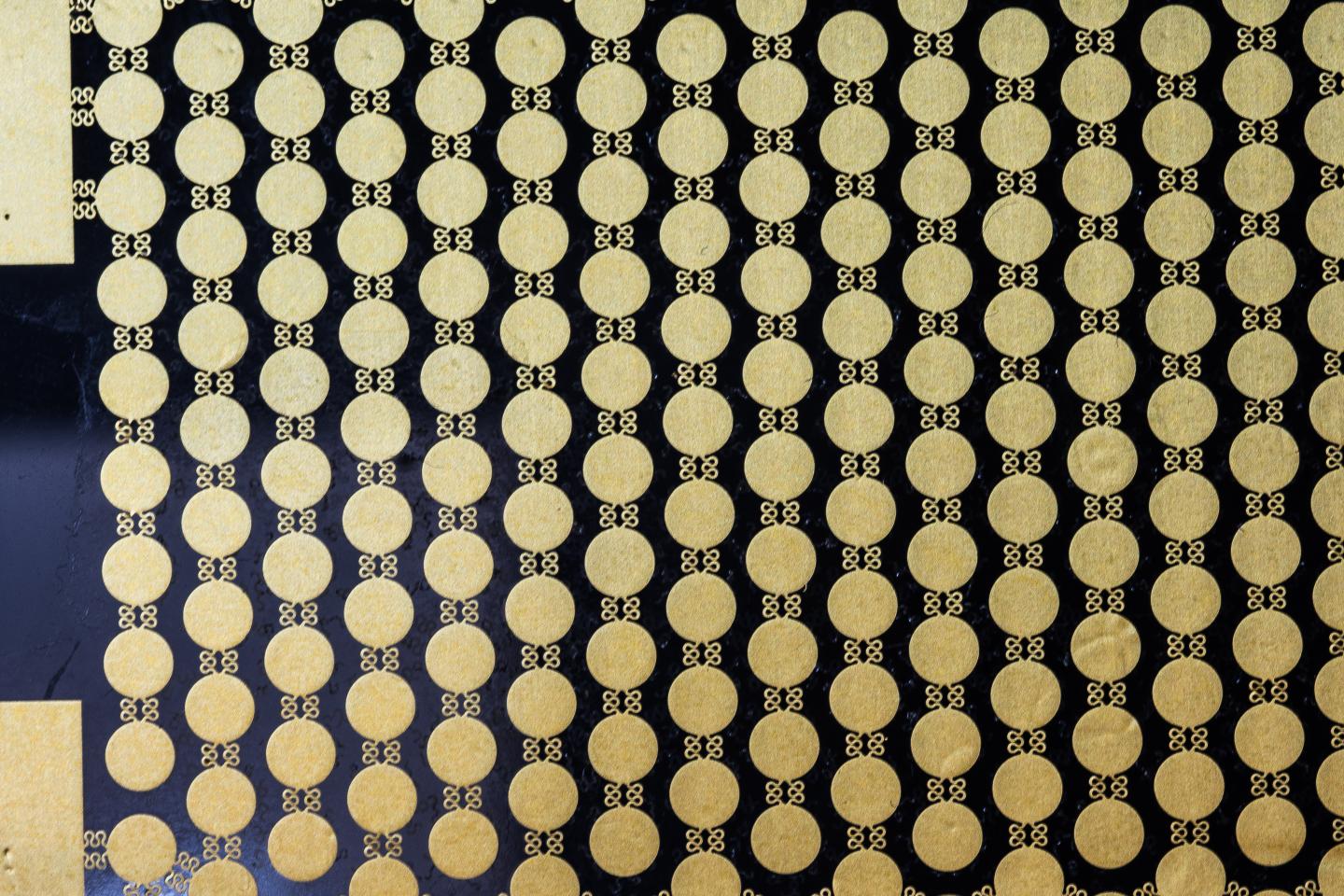 The biofuel cells island and bridge structure gives them their flexibility and stretchability. Source: University of California San Diego

A team of engineers has developed stretchable fuel cells that extract energy from sweat and are capable of powering electronics, such as LEDs and Bluetooth radios. The biofuel cells generate 10 times more power per surface area than any existing wearable biofuel cells. The devices could be used to power a range of wearable devices.

The epidermal biofuel cells are a major breakthrough in the field, which has been struggling with making the devices that are stretchable enough and powerful enough. Engineers from the University of California San Diego were able to achieve this breakthrough thanks to a combination of clever chemistry, advanced materials and electronic interfaces. This allowed them to build a stretchable electronic foundation by using lithography and by using screen-printing to make 3D carbon nanotube-based cathode and anode arrays.

The biofuel cells are equipped with an enzyme that oxidizes the lactic acid present in human sweat to generate current. This turns the sweat into a source of power.

Engineers report their results in the June issue of Energy & Environmental Science. In the paper, they describe how they connected the biofuel cells to a custom-made circuit board and demonstrated the device was able to power an LED while a person wearing it exercised on a stationary bike. Professor Joseph Wang, who directs the Center for Wearable Sensors at UC San Diego, led the research, in collaboration with electrical engineering professor and center co-director Patrick Mercier and nanoegnineering professor Sheng Xu, both also at the Jacobs School of Engineering UC San Diego.

To be compatible with wearable devices, the biofuel cell needs to be flexible and stretchable. So engineers decided to use what they call a “bridge and island” structure developed in Xu’s research group. Essentially, the cell is made up of rows of dots that are each connected by spring-shaped structures. Half of the dots make up the cell’s anode; the other half are the cathode. The spring-like structures can stretch and bend, making the cell flexible without deforming the anode and cathode.

The basis for the islands and bridges structure was manufactured via lithography and is made of gold. As a second step, researchers used screen printing to deposit layers of biofuel materials on top of the anode and cathode dots.

“We needed to figure out the best combination of materials to use and in what ratio to use them,” said Amay Bandodkar, one of the paper’s first authors, who was then a Ph.D. student in Wang’s research group. He is now a postdoctoral researcher at Northwestern University.

To increase power density, engineers screen printed a 3D carbon nanotube structure on top the anodes and cathodes. The structure allows engineers to load each anodic dot with more of the enzyme that reacts to lactic acid and silver oxide at the cathode dots. In addition, the tubes allow easier electron transfer, which improves biofuel cell performance.

The biofuel cell was connected to a custom-made circuit board manufactured in Mercier’s research group. The board is a DC/DC converter that evens out the power generated by the fuel cells, which fluctuates with the amount of sweat produced by a user, and turns it into constant power with a constant voltage.

Researchers equipped four subjects with the biofuel cell-board combination and had them exercise on a stationary bike. The subjects were able to power a blue LED for about four minutes.

Future work is needed in two areas. First, the silver oxide used at the cathode is light sensitive and degrades over time. In the long run, researchers will need to find a more stable material.