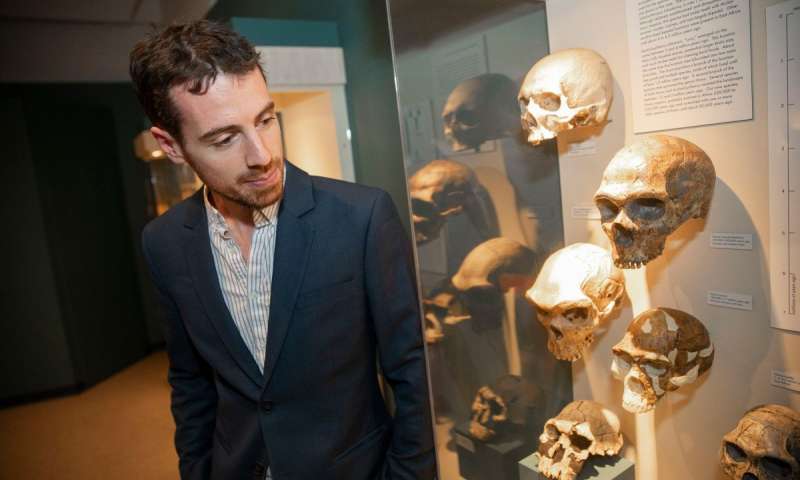 Teeth may be an important new resource for understanding the lives of our extinct relatives, said Daniel Green, a postdoctoral fellow at the Forsyth Institute, an affiliate of Harvard Dental School of Medicine. Credit: Kris Snibbe/Harvard Staff Photographer

Scientists are painting the clearest picture yet of what life may have been like for Neanderthals living in Southern France some 250,000 years ago, and to do it, they’re using an unlikely day-to-day record of what their environment was like—their teeth.

A team of researchers showed that examining the teeth of Neanderthal infants could yield insight into nursing and weaning behavior as well as winter and summer cycles. The study even found evidence that the Neanderthals had been exposed to lead—the earliest such exposure ever recorded in any human ancestor.

The study from researchers Daniel Green, a postdoctoral fellow at the Harvard-affiliated Forsyth Institute; Tanya Smith, a former Harvard professor now at Griffith University in Australia; and Icahn School of Medicine at Mount Sinai researchers Christine Austin and Manish Arora, who is also a former postdoctoral fellow at the Harvard T.H. Chan School of Public Health, was recently published in Science Advances.

“Humans are very different from other apes,” said Green, one of the first authors of the study. “We are curious to understand what made us different in evolutionary history, and a lot of people have looked to the climate to understand those differences.

“Obviously, we are changing the climate today, but in the past the climate was shaping us, and a number of theories suggest that changes in the seasonal availability of water drove us to take one part of our behavioral repertoire—stone-tool-making—and use that much more frequently,” he continued. “But that idea is hard to test … because we don’t know what rainfall was like 2, 3, or 4 million years ago. It turns out teeth are a really good way of addressing this problem because they grow in rings, like a tree, but those rings are formed every day.”

And much like tree rings, he said, changes in the environment—such as winters and summers—are recorded in the chemical composition of teeth, giving modern scientists a window into the seasonal patterns with which Neanderthals contended.

The study builds partly on research Green conducted several years ago as part of his Ph.D., in which he raised a flock of 10 sheep at Harvard’s Concord Field Station.

“What we did was collect 700 gallons of glacial melt water from Montana, so we could give it to the sheep and contrast it with Boston water as a way to create these artificial, experimental seasons,” Green said. “Everything was carefully controlled—we were measuring their body chemistry in real time, their environmental chemistry in real time, and we built a computational and statistical model to predict, based on measurements we can make in the teeth, what the seasons were like when they were living.”

The technique proved to be so effective, Green said, that not only could he identify the seasonal differences between the two water supplies, he was even able to spot short-lived environmental changes like snowstorms.

“Everything was working, but we were seeing one small blip,” he said. “When we went back to the animals’ lives … it turned out that there had been two big snow storms that were not a planned part of the experiment. The sheep had eaten snow from the ground, and that was reflected in their tooth chemistry. So the system worked so well that it actually ended up re-creating storm events, and teaching us about our own experiment.”

Informed by these findings, and adding barium and lead measurements to the oxygen isotope analyses in teeth, Smith and her international team of archaeologists, biological anthropologists, Earth scientists, and public health specialists were able to identify a similar seasonal pattern in Neanderthal teeth.

“We can see that one of the Neanderthals was born in the spring and weaned from mother’s milk in the fall, and we can see they were exposed to lead a number of discrete times in the winter,” Green said. “That was a striking result, and there is still a lot of mystery about it. We don’t actually know where that lead comes from … but we do know that later, during the Roman period and onward, there were lead mines in the area, so it’s possible that lead in the ground had contaminated some water or food sources.”

What is known, Green said, is that teeth may be an important new resource for understanding the lives of our extinct relatives.

“The oxygen analysis used in this study is a new type that has been used only a few times previously,” Green said. “So to validate that work, and show we can pick out these seasonal cycles from Neanderthal teeth, we looked at some of the analyses I had done for my Ph.D., used them to validate the technique, and we then applied it to Neanderthals.”

Going forward, Green hopes to trace the source of lead exposure found in the Neanderthal teeth, but also believes the finding may set other scientists on the path to searching for similar exposures in other early populations. The ability to track these exposures in teeth opens the door to using the technique in contemporary populations as well, he said.

“If people are saying they have been exposed to lead or that their water isn’t clean, we could go to that community and look at the teeth children are losing naturally,” Green said. “We could use this type of analysis to understand who has been exposed, by how much, and what kind of interventions are needed to deal with those issues.”

Green also said he hopes to see researchers apply the technique to other early human ancestors, particularly those in Africa, in an effort to understand the environmental challenges they faced as they evolved.

“I didn’t expect that the very detailed and technical geochemical work I did would apply to such a salient question about the lives of Neanderthals and in Europe, so this has been very rewarding for me,” he said. “It’s very exciting to have these cousins who are so closely related to us, and who contributed to our DNA, and to see these very precise moments in their lives and place them in some sort of environmental and seasonal context.”