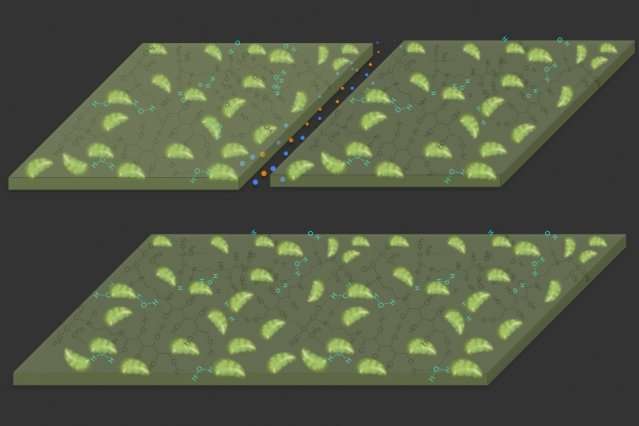 Diagrams illustrate the self-healing properties of the new material. At top, a crack is created in the material, which is composed of a hydrogel (dark green) with plant-derived chloroplasts (light green) embedded in it. At bottom, in the presence of light, the material reacts with carbon dioxide in the air to expand and fill the gap, repairing the damage. Credit: Massachusetts Institute of Technology

A new synthetic material that can strengthen and repair itself could be beneficial for the construct industry if enhanced further.

“This is a completely new concept in materials science,” Michael Strano, the Carbon C. Dubbs Professor of Chemical Engineering, said in a statement. “What we call carbon-fixing materials don’t exist yet today. These materials mimic some aspects of something living, even though it’s not reproducing.”

The researchers used a gel matrix composed of a polymer made from aminopropyl methacrylamide (APMA) and glucose, a glucose oxidase enzyme and chloroplasts—the light-harnessing components within plant cells. This material becomes stronger as it incorporates the carbon, but it not yet strong enough to be implemented as a building material.

The new material could be useful in the future in a number of applications to save on energy and transportation costs, including construction or repair materials and protective coatings that continuously convert carbon-dioxide  into a carbon-based material that reinforces itself. In its current iteration, the researchers believe the material could be used as a crack filler or coating material.

The researchers believe the material could be made into panels of a lightweight matrix that could be shipped to a construction site where they would harden and solidify from the exposure to air and sunlight.

By developing a synthetic material that both avoids the use of fossil fuels for its creation and consumes carbon dioxide from the air can benefit both the environment and climate.

“Imagine a synthetic material that could grow like trees, taking the carbon from the carbon dioxide and incorporating it into the material’s backbone,” Strano said.

The researchers initially used a material that used chloroplasts obtained from spinach leaves that catalyze the reaction of carbon dioxide to glucose. While isolated chloroplasts usually stop functioning after only a few hours when they are removed from the plant, the researchers were able to significantly increase the catalytic lifetime of extracted chloroplasts.

The researchers hope to replace the chloroplast with a non-biological catalyst. They also plan to optimize the material’s properties so it could be used for commercial applications.

The U.S. Department of Energy is sponsoring a new program directed by Strano to develop the material further.

“Our work shows that carbon dioxide need not be purely a burden and a cost,” Strano said. “It is also an opportunity in this respect.

“There’s carbon everywhere. We build the world with carbon. Humans are made of carbon. Making a material that can access the abundant carbon all around us is a significant opportunity for materials science. In this way, our work is about making materials that are not just carbon neutral, but carbon negative.”